Last night was interesting. I fully intended to play a little GTA4 which I have been neglecting hardcore lately for Age of Conan. I’d decided I’d go ahead and play a couple of hours of AoC first before moving on to GTA4 to finish off my tiny amount of free time for the night. This was an incredibly stupid decision as MMOs are infamously addicting and GTA4 is a game in which I’m not heavily invested yet and the inevitable happened. Yep, I ended up playing AoC all night.

Well, I’m not sure “playing” is the right word as I didn’t do all that much of that. I ran through the “Outflow Tunnels” instance solo once to finish up a quest there and I ended up leveling while turning it in. A few guild members talked casually on about the game on our Ventrilo server which eventually lead to an interesting discovery about the fact that map waypoint data could be copied to other machines/accounts which means that once someone had mapped out all of the crafting resource locations (which are static!) that file could be shared and the hard work wouldn’t have to be duplicated. 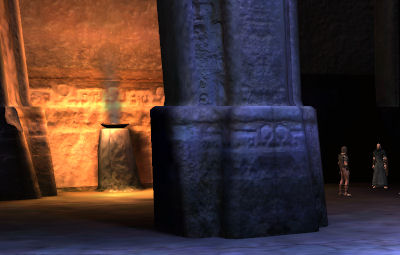 So, I get these resource waypoint files installed myself and wander out to a resource area to start training my gathering professions which is something I’d been meaning to do for a while now but had put off for various reasons. Sure enough my zone map is littered with waypoints and I start gathering away. This should save me tons of time!

Later conversation on the Ventrilo server shifted to the subject of our guild city. My guild had already claimed a guild city location yet hadn’t actually built anything there due to the massive funds involved. We’re a casual guild and most of us are still in our late 30s or lower. It turns out the architect supplies needed to build our Keep (which is sort of the foundation in the build process) require about 2 gold pieces which is a hefty sum for anyone at these levels. A few days earlier one member had suggested that we make everyone level 35 and over donate 10 silver which, by his estimation, would get us the gold we needed no problem. The guild leader instantly decided that this was, in fact, a great idea and started telling people left and right to throw some silver into the guild bank. With no records or logging of any kind I was hesitant to drop a third of my money without some kind of guarantee it would be used properly or that I wouldn’t be accused of never submitting it. Eventually I gave in and several others donated their silver as well. So the majority of the members on the Ventrilo server reach the conclusion that our Keep should go up tonight with several of them pledging additional funds to make it happen. Nice – I’d get to see it go up!

Soon a few guild members, more than we’d ever assembled in one place before to my knowledge, met at our guild city location (which just so happened to be in the same zone I was gathering resources in) to witness the event. We all casually chatted, joked around, PVP’d with each other a bit, and soon our keep was on its way up. 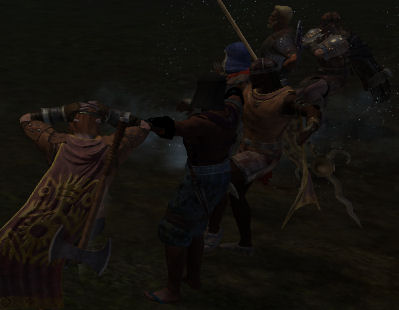 “What do the hardend, blood-splattered warriors of Hyboria do when they get together? Why dance of course!”

Even in a video game it’s pretty surreal watching a massive man-made structure just raise out of the ground as it did. Definitely cool. 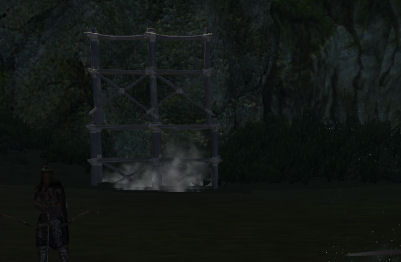 So now we have our very own Guild Hall! 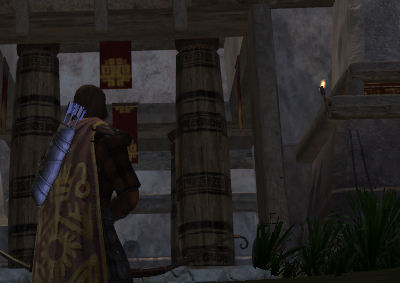 “Time for a house inspection…”

Of course, like almost everything else in Age of Conan, it was buggy and/or unrefined as hell. You couldn’t use any of the chairs or other decorations in the building apparently. The design of the structure itself seemed less than ideal for defense – it didn’t take much imagination to realize that glitch jumping off the towers onto the ledge above the opening in the hall’s ceiling produced a potentially useful defensive position yet by the design of the building that obviously wasn’t the designers’ intent. There were numerous odd collision issues, particularly with climbing the stairs of the towers. The whole thing was targetable and with being a massive structure fighting in and around it seemed to produce a lot of difficulty with click targeting never mind the ugliness of having the whole structure highlight on mouseover and your tooltip constantly up. To make matters worse any errant clicks while you were in or around the Keep often produced a popup box showing information about upgrading it to the next tier. Highly, highly annoying. 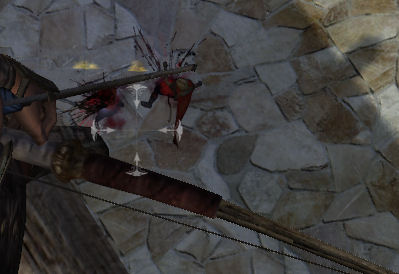 Still, it was kind of nifty I suppose. I’ll withhold judgment on it until we’re much further a long in the game but so far I don’t feel that AoC’s take on guild structures completely delivers on the player owned structure concepts of some of the more open ended games such as Ultima Online or Eve Online though the PVP orientated “battle keep” guild cities of the end game hopefully address some of those concerns. I’ll continue on with that whole discussion in a later post though.