So Blizzard‘s mysterious mystery image mystery is no longer a mystery! Or something… Diablo 3!

In better fashion that most game announcements Blizzard has simultaneously released a great website with plenty of cool info, lore, screenshots, and a couple of videos including a 20 minute game play movie. 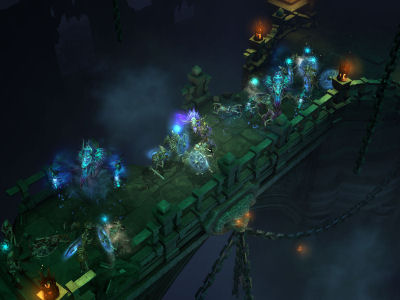 “Who knew you could set your camera like this in WoW?!”

It looks quite a bit like Diablo 2, only refined in some areas and using a much more modern 3D engine. The 3D engine, from what I can tell, actually reminds me quite a lot of Titan Quest‘s and doesn’t look to be all that advanced which hopefully means the game should have relatively low hardware requirements. One advantage of using a 3D engine is greater control over animation and many of the animations shown in this preview are fluid and much more expressive than those of the past games. So expressive, in fact, that I can’t help but wonder if the player avatars will be more fully fleshed out characters this time around. It does appear that the game has an overall slightly more cartoony, stylized, and less gritty look, with simpler looking models and a brighter, less dreary color palette than the previous two games. This is sure to irk some hardcore fans of the past games, especially those that despise World of Warcraft, but honestly it isn’t taken to WoW extremes and doesn’t stray too far from the previous two games. 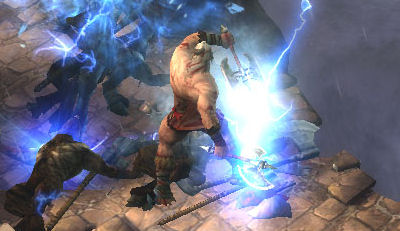 “Apparently the world of Sanctuary is 80% bridges.”

There is apparently going to be a lot more randomization in dungeons and available quests and events this time around which should make replays a lot more entertaining and varied. This is definitely a good thing as the random elements of the Diablo series strike me as one of its appeals but not one that has been sufficiently explored considering its Rogue-like roots. Of the two classes shown in the preview the Barbarian looks to be very consistent with the design of the Barbarian class from Diablo 2 while the witchdoctor looks like he was put together to replace the Necromancer. The mini-boss they showed in the trailer is fuckin’ huge! This gives me hope that the bosses featured in Diablo 3 will be a lot more epic than those of Diablo 2 – I’m sure I wasn’t the only one who was amazingly unimpressed by The Lord of Terror himself. There were some other nifty things like destructible environments and both sexes available for every class as well but those seem like minor bullet points to me. 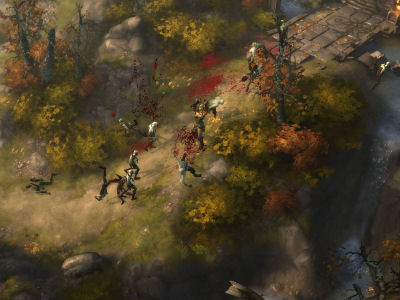 Beyond the videos I found the content on the new site to be quite awesome. The descriptions of the few released classes, monsters, and locations are all done in character with the renowned scholar Abd al-Hazir telling us of his research into these various topics. Pretty good reads and I loved the quip about the skeletons hiding in barrels for hundreds of years. Good stuff and I can’t wait to read more.

We’ve also got Deckard Cain’s journal. Anyone who played either of the previous two games should remember Cain and it appears as if he has a major role to play in Diablo 3 as well, maybe even larger than in previous games if some of the hints I’ve read are to be believed. Anyway, Cain’s journal sums up the plots of the first two games from his perspective, complete with his delightful Sean Connery-esque accented voiceovers and even all of the cut scenes from Diablo 2 thrown in as well. This stuff is a must for Diablo fans to dig through!

All of these screenshots are Blizzard’s and not mine. Of course, if they were mine this post would be much, much more interesting.