So already having withdrawals from Warhammer Online I’m totally engrossed in Warhammeriness of all sorts lately. 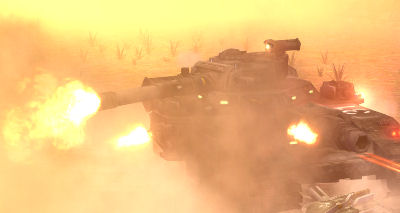 I dusted off my copy of Warhammer 40,000: Dawn of War and the first two expansions, installed them and ended up playing some entertaining skirmish matches against the computer just to try to get it out of my system. Sure, Warhammer 40k isn’t exactly Warhammer Fantasy but I’ll take what I can get. I’e got to say that this is, by the way, probably my favorite real time strategy game of all time.

My brother and I both bought the newly released real time strategy game Warhammer: Battle March for the Xbox 360 with the intent on having our massive armies slaughter each other repeatedly over Xbox Live. Of course, we’ll have to figure out how to play the fucking thing first. Holy bad documentation, Batman! Seriously, if you’re going to design a control scheme that requires 3 hands you should at least give us a decent manual, nevermind all the details that are never even brushed over in the manual or in-game tutorials. Still, I anticipate much fun with this.

“I thought these guys only lived in forums and under bridges?”

And finally a surprise early preview weekend in Warhammer Online for us previous preview weekend players before open beta started up. I don’t have much to say about it. I played my White Lion a bit to check and see if pet pathing and control was indeed fixed and yes, it appeared to be, and spent the rest of the time screwing around with a
Dwarf Engineer.

It’s funny though. Here I was playing a Public Quest and thinking about some of the complaints I’d read about “leeching” and “kill stealing” in them when it seemed to me that really, the spirit of the Public Quest system is cooperation amongst allies in a bigger conflict. Leave it to a bunch of min-maxing MMO idiots to turn “work together to do this task” into “OMFG I need to get the most kills and get the lootz get outta my way!!!111” Just as I was pondering this I had my first, actual unplesant Public Quest encounter. Ok, it wasn’t really that bad, but still amusing:

We were in a stage of the Public Quest that required you to get several of a particular kind of item. Clicking the item took some time and brought up a progress bar. This progress bar could be interrupted by attacks. Rounding this amazingly intricate but oh so common MMORPG puzzle out there was a monster or two guarding each of these items. If you haven’t already figured this situation out then you’re probably one of the few gamers still around lucky enough not to be scared by hundreds of hours of MMO addiction. Anyway, the solution is of course to kill the monsters and then get the item. 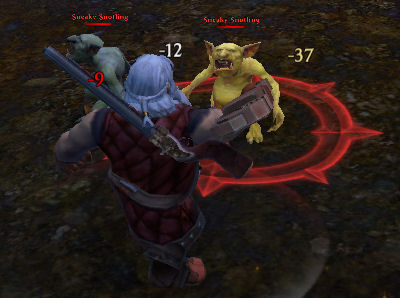 “Bringing the hammer down”

As I was trying to do this myself I kept seeing another dwarven player run in an loot the item as soon as someone else had aggro’d the mob guarding it. The first time I didn’t take much note as the whole scene was pretty chaotic and he could have easily been confused. The second time he did it, however, it was pretty blatant and extremely obvious that the guy fighting the monster, standing right next to the item, was attempting to get it himself. Next he pulls the same shit on me as I run up to an item and try to grab it before the monster attacks me. Just as I’m interrupted (gee, that was a good plan!) he runs up and starts trying to loot it. Of course, the monster is on me so I have no choice but to fight it off as this grubby bastard dwarf loots my item… Argh! Feeling a little vindictive I make an immediate beeline for him as he is put in an almost identical situation as I just was, only he’s getting beaten down by two mobs whilst repeatedly trying to pick up the item. I run over to him and blatantly pick up the item from right under his fat, dwarven belly and run off. Ha! Of course the idiot has the nerve of immediately typing “pffft… steal!” in public chat. I ignore him.

I almost don’t want to play with the Warhammer Online beta knowing that none of my progress will be making it into retail when it launches in a week but trying lots of difference races and classes seems to be a fun diversion in the meantime.