Lately I had been determined to get the Grand Theft Auto 4 skeleton out of my closet – that is it has been taking me forever to beat the damn thing and this was a big problem for me as my back log has been building up yet I’ve been absolutely compelled to resist playing any other console games until I got it out of the way. So, with that in mind my last couple of weekends had been dedicated to GTA4-a-thons (when possible.) 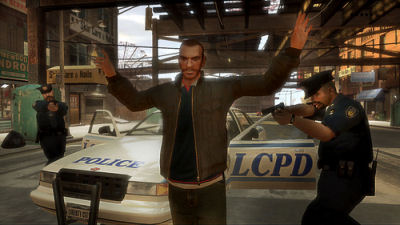 “I wish I could take in game screenshots.”

First let me say that part of the reason it took me a while to play was that it didn’t really grab me at first and I almost immediately made a number of minor negative observations:

Anyway, as you can see most of my bad early impressions were taken back after playing a bit longer. I actually suspected this would be the case which was one of the things that kept me playing. The GTA sandbox can be pretty intimidating when you’re first dumped into it and I had always enjoyed the previous games much, much more after getting used to the controls, learning more about the various game play systems, and getting a better feel for the layouts of the cities. GTA 4 was absolutely no exception to this. I remember feeling the exact same way with GTA 3 – at the start I was some what intimidated by the massive scale of the city and bewildering amount of choices I had, yet by the time I had logged many hours into it I was enjoying myself immensely and the game was just flying by. With GTA 4 I was almost sad to see it finally come to an end.

So, yes, I finally beat the game! The story wrapped up well enough and I then spent several more hours playing the side missions and racking up some of the easier achievements which for the most part I had a lot of fun with. I’ve yet play online via Live though I’m itching to try it. I’m sure I’ll post about it when I do. In summary I’d say this game pushes the series ahead with a much better story, much better characters, an improved sense of immersion (the city, graphics, animations, physics, more detailed combat system) with the series’ awesome style, usual parody heavy sense of humor, and great voice acting still intact.