I originally wrote but never posted my views on fighting against the different Destruction classes as a White Lion while I was still in tier 1. I’ve come back and revisited these notes with updates taking into account where I am now, at the end of tier 3. I’m throwing a few basically unrelated lake RvR screenshots into the mix as well. Oh, here’s one now! 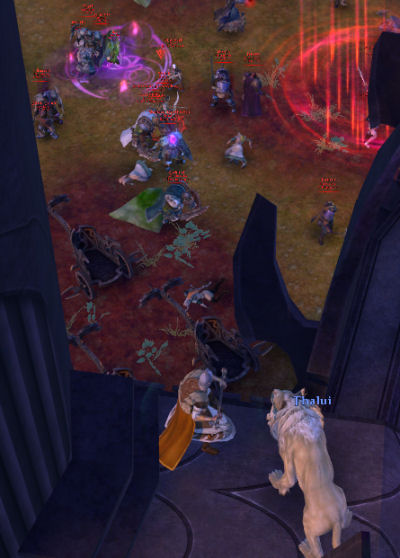 “Hey, I think I can see my house from up here!”

Witch Elves – Tier 1: More than anyone else Witch Elves seem to rush out ahead of the pack to jump on targets even if an entire order line is headed towards them. Stupid players? Maybe, but from a roleplay perspective I suppose it fits well with their blood thirsty nature. I don’t usually have much problem killing them, even in a one on one situation, although they are surprisingly tough and do take a lot longer to kill than you’d expect from someone running around practically nude. Still, I enjoy putting the overzealous ones in their place. Tier 3 Update: My opinion on Witch Elves hasn’t changed a whole lot. They seem to be a little less reckless and many will rely on their stealth ability more to get behind our lines and go after our healers more effectively. While I still have no problem killing them, generally, I respect their damage output more than I did in tier 1. They are definitely capable single target damage dealers and dueling one can quickly go the wrong way for me.

Disciples of Khaine – Tier 1: What the hell? I learned quickly not to consider DoKs a target of opportunity as they can really take a beating and often outlast me in one on one combat. This screwed with me pretty good at first as they look pretty squishy and, well, they’re healers right? Wrong! DoK’s are Destruction’s Warrior Priests – they can take and deal a respectable amount of damage AND heal… Ugh! Tier 3 Update: Still a massive pain in the ass for me. Since it is generally agreed upon that taking out enemy healers first is a good strategy for winning fights, and there’s almost no debate that a good enemy healer can change the tide of an entire skirmish, I do end up going for DoKs pretty frequently. In a good, chaotic battle I have little trouble burst damaging them to death before they get off more than a single heal but in one versus one situations they still often tear me up. I honestly feel like they’re just a little out of balance. Last night, for instance, my 31 White Lion was absolutely destroying his opponents. I felt unstoppable… Literally ending scenarios with double the damage of the next guy in the list and, by the way, setting a new personal best record. During the end of one of these fights I encountered a lone Disciple of Khaine and after ignoring him initially yet having him give chase decided to attempt to teach him a lesson. With the scenario clock ticking down I very nearly died to him solo – saved by the bell with just a sliver of life left. Just before the screen faded, however, I noticed that he was only rank 18. Seriously?

Sorceress – Tier 1: One of my favroite targets. They die pretty damn quickly and I’m not sure I’ve ever been killed by one unless it was a total gankage situation. Tier 3 Update: Still pretty easy to kill although I definitely noticed a sharp rise in their lethality in tier 3 scenarios. Particularly their annoying and deadly Pit of Shades AoE spell which seems to devastate some of the more crowded areas such as the walkways in the Doomfist Crater scenario. Obviously RDPS classes excel more at some situations than others and there are definitely times when I’ll go out of my way to put these foes down quickly.

Black Orc – Tier 1: Argh… Black Orcs are some tough mofos. I usually avoid them if possible, especially one on one. A Black Orc who is at the top level range of their tier, well geared, and played well does service to the term “tank”. You and your buddies can literally beat on one of these fools for minutes without seeming to make much progress. Tier 3 Update: Not much as changed here. They still don’t do enough damage to feel like a threat to me but they can be so insanely difficult to kill that I often avoid trying to fight one unless there’s no better targets. If one of these guys has a healer than I won’t even so much as dent him without turning my attention to his support first. I haven’t encountered a large amount high level, well geared Black Orcs in tier 3 but I expect they’ll be an even bigger headache at rank 40. 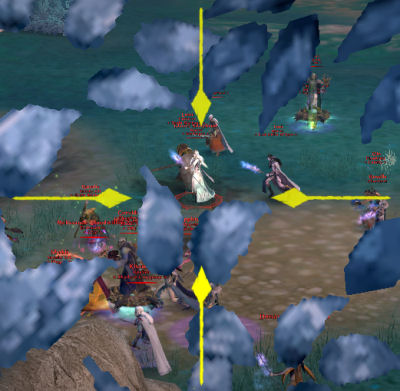 Squig Herder – Tier 1: Hmm! One of my Destruction counterparts has sadly never been a big concern to me which really makes me wonder how Destruction players view White Lions. Their bows don’t seem to do much and neither do their Squigs. They can be pretty annoying, as can White Lions, but don’t seem to be nearly as lethal. They die quite quickly. Definitely seem to be a support class and seeing 3 of them up on a wall raining arrows on individuals below made me think that they are probably quite effective at that role. Tier 3 Update: I’ve noticed them putting out a little more damage than they had at lower levels but it is still hard to consider them a threat. When some of the RDPS classes get some damage love in patch 1.05 the story could very well be quite different, however. As far as killing them goes they’re generally an even easier target than their Shaman brethren.

Shaman – Tier 1: Shamans seem about the same as Squig Herders to me. Their attacks can be annoying but the main thing I worry about when facing a Shaman is who they might be healing. Like the Squid Herder they die quickly. Tier 3 Update: Shaman definitely seem to benefit from more survivability as they rank up. Given their height and their tendency to stay back from groups they can be hard to focus on in the first place and when you do finally go after one they are often quite tricksy with their damage shields, roots and the like. Sometimes I’ll have trouble cutting through one’s shields or landing that last, lethal blow before they heal themselves up a bit, but generally I still don’t consider them too difficult of an opponent. Their healing abilities do definitely get my attention, however.

Chosen – Tier 1: Not nearly as impressive as the Black Orc. I usually avoid them though when I do face them I fare much better. Good defense, decent damage, but fairly bland overall. They sure look cool though. 😉 Tier 3 Update: Nothing new to report here, sadly enough. I was kind of expecting Chosen to come into their own but as opponents they still feel like weaker, easier to kill Black Orcs to me. 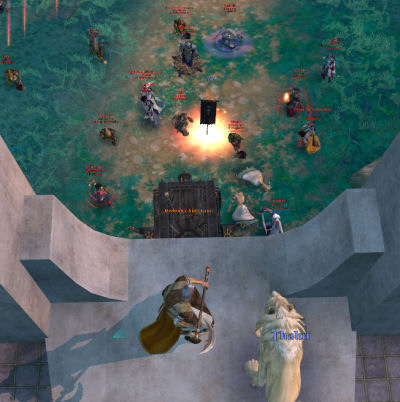 “Another nice view from the battlements.”

Marauder – Tier 1: My other Destruction counterpart. I love killing these dorks. Seriously, when I see a big mob and I’m looking for a target of opportunity I usually go after a Marauder if there’s no one half dead hanging around. Marauders seem, err… Over confident in their abilities. They’re always running around aggressively but I usually have absolutely no trouble taking them down. I will say that I once fought one particular one in a scenario who seemed to have good gear, was at the top rank range in his tier, and seemed to be played pretty well, who was very tough and quite deadly, but that was definitely the exception. I do, however, wonder if I’ll be seeing more Marauders like him as I level up. Tier 3 Update: Not much has changed on the Marauder front other than I see a lot more of them going for AoE damage than I used to. If a Marauder catches me in a bad spot (low health, etc.) or has back up he can usually kill me before I can finish him off but the rest of the time I usually have the upper hand. I’ve run into more of these higher level Marauders packing good gear and apparently being played well as of late though and they seem as if they might indeed out damage me. Still, this game isn’t about dueling and over all, in the situations I run into them the most in, I feel that I am superior.

Magus – Tier 1: It seems like I’ve rarely fought Maguses but when I have they usually run for their lives as soon as I engage them. No real problem taking them out and their spells seem more annoying than anything. Tier 3 Update: Again, not much has changed. They don’t seem like they pack a ton of damage or maybe my class just isn’t a favored target. They’re easy enough to kill. Like the Squig Herder they should be getting some damage buffs in the next patch which may entirely change my view of them.

Zealot – Tier 1: I don’t think I’ve seen very many Zealots at all and those I did weren’t much of a concern. They died quickly and didn’t do much note worthy for the short period of time that they were alive. Tier 3 Update: I still don’t see a ton of Zealots running around and when I do as healers they’re often one of my first targets. They don’t seem to be able to defend themselves as well as Shamans – maybe they do more damage to me while I’m chasing one down (?) but I bring them down quicker and every time and that is usually all that matters.