I was planning on having the Untitled Games Podcast crew over to my place to record and to potentially play some Rock Band a few weekends back. I struggle to justify exactly why but I hadn’t really played Rock Band in quite sometime so I pulled out my drums to practice a bit so I didn’t embarrass myself too badly in front of everybody. 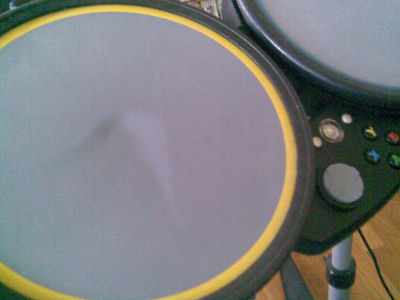 That’s when I noticed there was an odd depression in my yellow drum head and also a much less pronounced one on the blue drum. The yellow one also felt strange when I pressed in the center, almost like a button. It was as if somehow the rubber layer over the drum head had thinned out so now I was pressing directly on the censor. My friend mentioned to me that they had noticed some time before that it looked weird too. Odd. Still, I set them up and played six or so songs and they worked just fine. Hmph, weird!

The next night we recorded a two man down episode 3 and, afterwards, engaged in some Rock Band shenanigans. I was thrilled to discover that my yellow pad was now completely and utterly fucked – it’d only register 1 in 10 or so notes! Doh. Luckily we were using Rock Band 2’s “no fail mode” so it didn’t totally ruin the night.

The next day one of my compatriots called to tell me they had ventured to Circuit City during it’s going out of business sale and seen several sets of Xbox 360 Rock Band 2 wireless drums for 40% off. I had kind of been looking for a good excuse to upgrade to the Rock Band 2 drums – the removal of the cable wasn’t a big deal but I thought the add-on cymbals looks neat and the quieter, more bouncy pads sounded like a good upgrade. 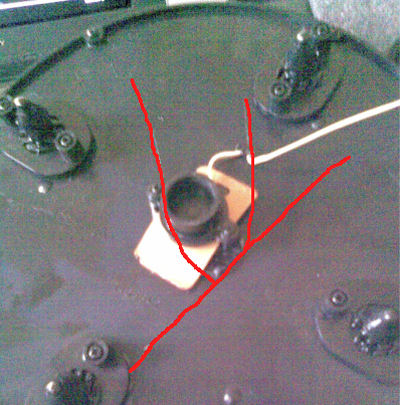 “Cracks on the underside of the head after dismantling.”

After disassembling my old drums I discovered that the problem was that my two center pads were massively, massively cracked. I figured I could possibly fix it myself but nothing short of some sort of epoxy (which I didn’t have) would keep it from rebreaking the next time I smacked it a little bit too hard and I’m still not even sure the broken head was the only problem. I decided to simply opt for the new drums and headed off to Circuit City. 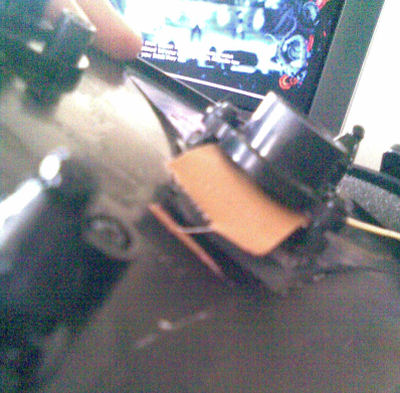 When I arrived they only had 3 boxes of the wireless drums left and all of them seemed to have been curiously taped shut as if they were returns. I decided to take the gamble and grab one of them anyway. When I got home and unboxed it I was pleased to see that everything was in order – it didn’t appear that anything was missing or had otherwise been tampered with after all. Once I got the drums setup, however, they absolutely refused to connect to my 360. I absolutely can’t stand buying something and having it dead on arrival and thanks to the terms of Circuit City’s liquidation I couldn’t return the drums, not even for an exchange. Doh!

After browsing various forums and trying every suggestion under the sun it appeared that my only option was to RMA the drums.

I went through EA’s RMA process which I found to be way more painful than it should have been. The website didn’t work right in anything besides Internet Explorer (…and who the hell uses that? 😉 ) and even then it was poorly worded and not very easy to use. I actually found myself calling EA (and of course their number wasn’t easy to find) to make sure they had my correct RMA information because the process and it’s corresponding confirmation e-mail were so damn unclear.

Once all that was done with I had to get them a copy of my receipt with a date of purchase to prove that the unit was still under manufacturer’s warranty. On the bright side, once I was able to do that I received a UPS tracking number in about 20 minutes. 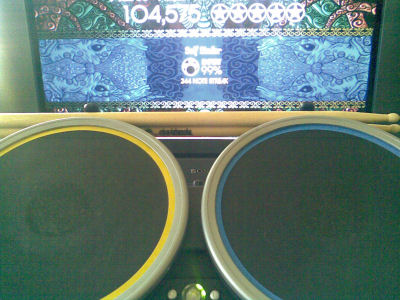 A few days later and UPS showed up with my new drums. Other than trying to figure out how to put my old ones back in the damn box I had zero trouble with the new replacement drums. They connected right away as my previous ones should have and they performed well during another Untitled Games Podcast rocking out session, this time after the recording of TUGP episode 5.

All in all, while I was extremely disappointed about the original “dead on arrival” drums the RMA process was easy enough, very quick, and I’m satisfied. Now I just need to scrounge up some money for those cymbals and, of course, even more songs to play! 😀