I was able to finish up Overlord last weekend, thank goodness. Though I liked the game it felt a little too long to me and I was more than ready to move on.

A few notes about the last bit of the game:

First, whoever cast the voice actors for both the Jewel and Kahn characters needs to be smacked. Acting ability aside the voices don’t match either character to the point of ridiculousness.

I’ve also got to say that having the checkpoint right before the final boss fight require a few minutes of travel, combat, and other dicking around was a little annoying even if I did only die a few times in the attempt. Admittedly this might have been my fault for not taking better advantage of the save system, I’m not positive, but in any case a checkpoint upon entering the final boss battle might have been nice. 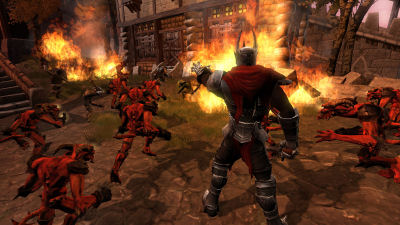 “Take their women and children first!”

The plot twist at the end threw me a bit of a curve ball – I didn’t really see it coming (even forgetting having it spoiled when the game was first released) and was pleasantly surprised by it. The issue of the heroes you go after not being all that “good” that I mentioned in my earlier entry about Overlord actually ended up being explained in the end though I can’t say much more than that without spoiling it.

I didn’t really go after the achievements after beating the game. I was going to go for a few but after finding out the hard way that I couldn’t get my 100% corruption achievement after beating the last boss the wind was a little knocked out of my sails. This was especially disappointing since the only reason for doing some of the more dickish things I did was to get that achievement and the one task I lacked was relatively minor and not even related to the story. Ah well…

I am much more curious about Overlord II now though. Will it be a continuation of the same story? They certainly left the door open at the end of the first game. Will the controls be refined? I could definitely use some tweaking when it comes to more precision arrangement of my minions. How about the adventure and RPG elements? Comparisons to Fable 2 are inevitable. We’ll have to see.

Well, that’s one more game in my Xbox 360 backlog crossed off the list. Next up I’m actually playing a relatively recent release. Who would have thought?

Screenshot lifted from somewhere else since I can’t easily take HD console screenshots.