I somehow hadn’t mentioned this yet but the next game I decided to tackle in my Xbox 360 backlog was Overlord. Overlord came out near the launch of the 360 and had caught my eye early. The whole “evil” angle that sort of parodies other fantasy worlds seemed pretty humorous and, of course, the whole concept of ordering minions around seemed pretty awesome.

The minions are indeed cool. As a Games Workshop fan they remind me a lot of Snotlings or Nurglings. I love “sweeping” my giant horde of minions over to an enemy to have them envelop it entirely, hitting it from every direction, hanging on to its back, etc. It’s actually kind of brutal now that I think about it. You also can’t overlook the whole pillaging angle of it – when you sweep your minions over of an area with containers they all smash and grab items, bringing anything you’d want back to you, while equipping any armor and weapons they can use while gleefully shouting “for me!” Very cool.

One thing I didn’t expect was some of the more RPGish aspects – the ability to customize your character a tiny bit, along with your tower. There are some other interesting things you can do in your tower as well. I feel like if all of these things were fleshed out a lot more in the recently announced Overlord II it could make the game appeal more to other audiences. 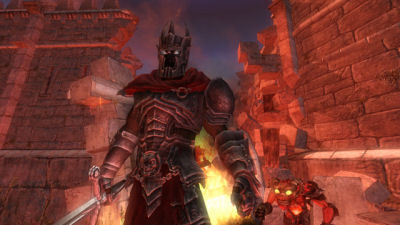 “Decidedly less awesome than I look.”

The setting is pretty enjoyable with it’s whole fantasy world flipped on its head kind of thing though the story itself isn’t anything too amazing thus far. You play the generic fantasy bad guy (who looks an awful like Sauron) trying to rebuild his evil empire all while subjugating the locals and smashing all of those pesky “heroes” that roam the land. An odd thing about it is up to the point I’ve played I haven’t really been put into many situations where I’m doing inherently evil deeds – most of the quests in the storyline are actually somewhat good, or at least neutral, and the heroes and other enemies you kill are usually portrayed as being corrupt or not having been so good in the first place. I’m especially amused by the portrayel of the evil Halflings in the first area – what’s not to love about the idea of roaming packs of Hobbits going around raiding villages, taking slaves, and generally being anti-social shits when they’re not busy at their massive feasts and smoking their pipeweed?

I suppose the main idea is that you can be sort of a benevolent dictator – ruling the land with a population that for the most part actually appreciates you on some level. If you’re so inclined you can however purposely be a bit of a dick, doing overtly evil things on the side, eventually resulting in a more vicious, fear based reign. For instance, early on in the game I found some stolen food that some villagers asked me to return to them. I could have returned it to them but instead I decided to keep it all for myself. Of course another thing the local peasants don’t seem to like is when you casually slaughter them. *whistles* Another time while hanging out with some Elfy types I decided to burn down their “sacred grove” just for the hell of it. *shrug*

I almost never play the “evil” side in games that give you such choices but this time I figured “what the hell!” This is a game built around playing a bad guy so I might as well go all out instead of trying to be a goody two shoes like I usually am.

More on Overlord when I finally beat it. 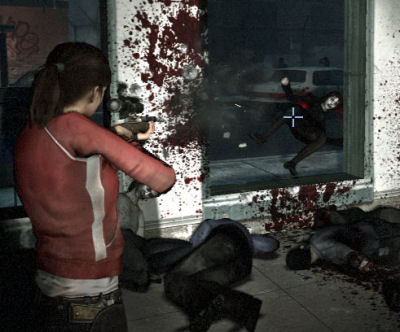 I’ve played a lot more Left 4 Dead since we first picked it up a couple of weeks ago. Playing it co-op with friends totally reminds me of how much I love playing games cooperatively period. I love all of the cool, unique stories we always end up with after a L4D session. Making memories and such.

The second time I played it I was joined by only NetworkShadow and we ended up making it all of the way to the end of the first act. Of course I was viciously knocked off of the side of the building by the last tank which was a pretty crappy way to die. At least when no one is there to notice and point and laugh. Then I got to watch NetworkShadow frantically try to survive the rest of the onslaught by himself which was actually pretty damn entertaining. I thought he was going to make it, honestly. For the record, I was bitterly rooting against him… 😉 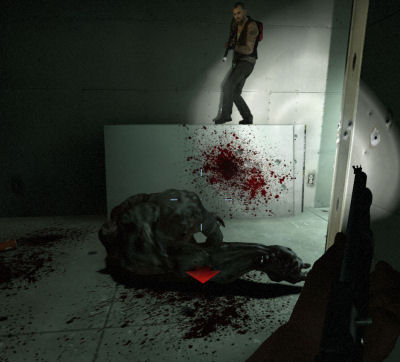 “Standing victoriously over a tank.”

The next time we played all four of us got together. We got to the end of the second act and, hilariously, when the ship finally showed up to rescue us I immediately ran my ass off towards the dock, missing almost the entire last zombie push but accidentally leaving all my teammates to be slaughtered. Hobotix ended up making it to the boat, barely, but Radium and NetworkShadow ended up biting the dust… Oops!

Another time with all four of us we made it to the end of act 3 but NetworkShadow died before we made it onto the plane. It was quite an epic battle with all of us almost dieing multiple times. So fun! 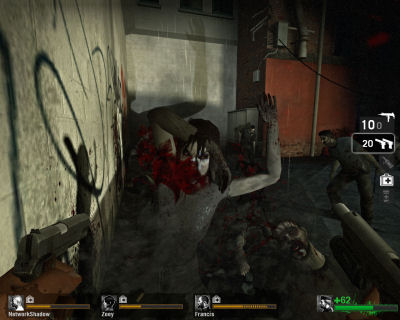 “Up close and personal.”

I’ve said it before (on the podcast, in particular) but Left 4 Dead is one of those games that dieing and/or doing bad in is actually fun. Maybe simply because it’s a shared experience but perhaps also because the game sort of pits you as the loan survivors struggling against the odds to make it out of alive so it’s not entirely unexpected when you don’t. Either way I’m not complaining…