I tried out the demo for the new XBLA game Death Tank after reading some Saturn fanboys gush about it on NeoGAF and I’m happy to say that I liked it a lot. I played a bit against the computer and even hopped online and played some match making games. The demo is very representative of what you get in the full game save, of course, for the additional weapons and upgrades that are unlocked.

The game itself is an “artillery” style game very similar to Gunbound, the Worms series, and the PC shareware classic Scorched Earth with one major difference – it is real time instead of turn based. This can change things quite a bit as you might imagine. Not only do you need to be quick in aiming your shots but also deciding who to target, what weapons to use, when to move, etc. comes into play like never before. Turns do, err, sort of exist though, in that reloading takes time, so it might not be quite as chaotic as it sounds. 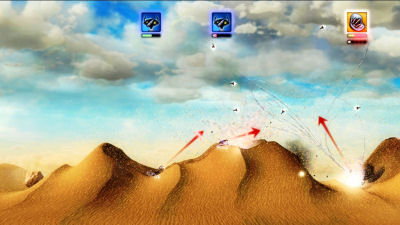 “Ahh, warfare! What deserts were made for.”

I’ve read (and heard) a lot of criticism of the game, however.

One complaint was about how the Targeting Computer upgrade, which basically lets you see exactly where you’re aiming, is sort of the be-all end-all weapon. I definitely disagree – since it’s real time you can see exactly when and where your opponents using it are aiming and use it to their disadvantage by moving out of the way, preferably using your Jump Jets or Fuel to move quicker, or by activating your shield just before the moment of impact. It can be annoying but it really isn’t as big of a deal as people make it out to be.

One thing that I can’t totally disagree with though is the whole arms race factor: The better you do the more money you get to buy more weapons and upgrades while if you don’t get any kills you might not get any cash. This can sometimes lead to a situation where consistent winners ensure more and more victories through superior fire power where consistent losers simply feel cheated because they’re stuck with the basic artillery shell ammunition and none of the cool upgrades for almost the entire match. Pretty much all of these games work this way though – it’s part of the genre practically, but having been on both sides of that fence in other games I’d say that it is indeed a flaw.

The biggest one is probably the price though. The gameplay is pretty limited – you play the same randomly generated (I believe?) maps over and over again in more or less the same scenarios though they do occasionally mix it up with some theme rounds where you get free weapons and upgrades, or are locked to specific ones. Still, the game comes in at a 15 dollar price tag which seems pretty steep even with the game’s seemingly decent production values. As I’m sure most Worms players would agree these types of games make excellent party games though so if you’ve got the friends (locally or on Xbox Live) then it might indeed be worth it.

It should be noted that the original Sega Saturn version of the game (Death Tank Zwei) is included as a not-so-publicized (why?!) unlockable which does add a bit more value to the package.

As for me, well, I had pretty much decided not to drop the 15 bucks when I won a copy of it for free thanks to a drawing over at Evil Avatar. Woot!

Last weekend I had my parents over for dinner and ended up playing it with my dad who picked it up relatively quickly and seemed to be having fun with it which cemented the idea of it being a great pick up and party game. I intend to force it upon more visitors in the future to help test the theory and, more importantly, introduce some new people to the awesomeness of these kinds of games.