Again, apologies for the crummy screenshots. They’ll return back to being a little better setup and shot with the next update. 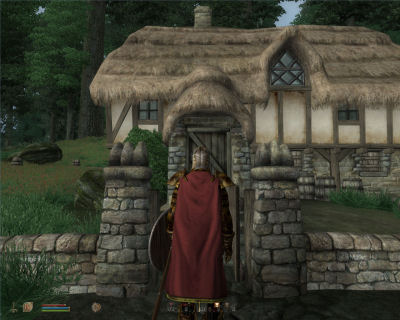 “…but I did stay at a Faregyl Inn Express last night!”

After leaving Hircine’s shrine I needed to bed down for the night and decided to head back towards civilization. After a short while I found a road and soon came upon a small inn where at I purchased a room for the night. The next morning I chatted briefly with the locals one of which recognizing me as an adventuring type asked if I’d find some potatoes that had just been stolen from her. She claimed she saw the thief running away through the woods but didn’t dare to pursue him herself. A bandit, eh? No problem. Hell, I figured it was probably a hungry kid and I wouldn’t even need to draw my blade to get her stuff back. 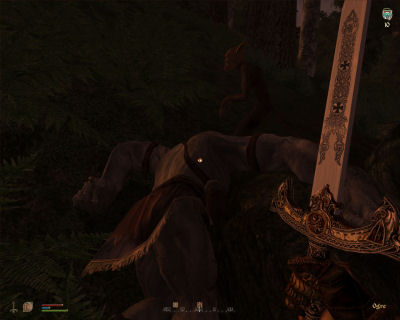 I left the inn and headed west through the forest. After not having much luck I took a seat on a hill to catch my breath and maybe eat a little when I noticed a strange figure in the distance. I quickly threw down my half eaten apple, grabbed my sword, and began to cautiously work my way back down the hill towards it. Once I got a little closer I recognized the huge, muscular, grotesque creature instantly – it was an ogre.

Unfortunately I had little time to prepare. A twig snapped beneath my feet and the ogre spun around towards me. It was no time and charged towards me. Although the ogre possessed great strength it was no match for my speed and dexterity. After searching its corpse I was surprised to find the potatoes in one of his belt pouches. The people at Faregyl Inn were lucky all this ogre did was a little pilfering. 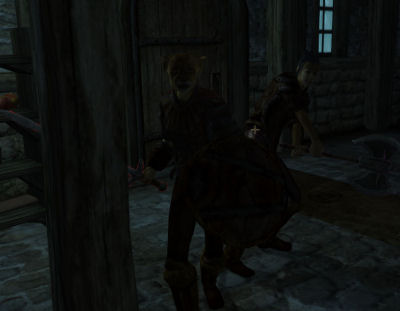 After returning the stolen potatoes to the Khajiit at the inn I decided to continue heading west through the forest. As usual I picked herbs, skinned some wolves and even a few bears, made note of but steered clear of a few caves, ruins, and other bandit habitats.

I soon came upon a secluded house nestled inside of a small valley. The house appeared to be abandoned so I decided to take a closer look and quietly entered. As I took a look around at the sparsely decorated, dusty den I overheard a conversation coming from upstairs. Oops! I crept back towards the door but froze when I noticed the voices suddenly stop – had they heard me? The very next moment two bandits were rushing towards me, weapons drawn. As it was quite evident that these weren’t simply protective homeowners I did not hesitate to defend myself. After slaying both I looted their corpses and picked the house clean of valuables of which there were few. 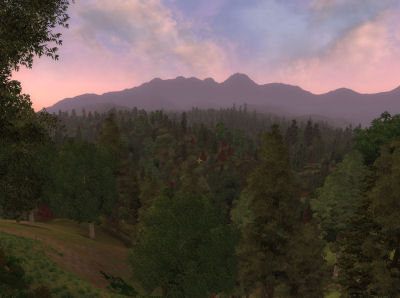 Next I wandered far south. So far south, in fact, that my herbs and prey seemed to dry up entirely. As night fell I was quite lost in this desolate part of the forest but soon spotted some far off lights and made my way towards them. I did not know if I was approaching friend or foe but as I got closer and saw the silhouettes of a massive ruined temple of some sort I began to suspect the latter. Luckily when I finally came upon the source of the lights, a couple of torch bearing travelers, they turned out to be peaceful pilgrims coming back from a visit to a nearby shrine. I followed them as they made their way along the path back to their town and soon found myself entering Skingrad. 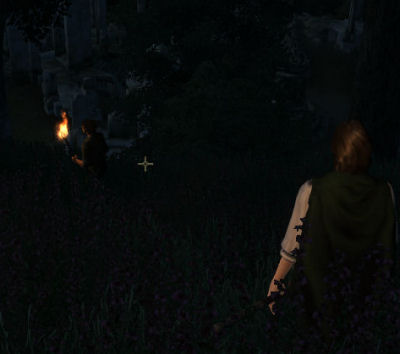 “Off to see the wizard! The wizard… err…’s guild.”

I had heard of Skingrad while in prison. Many of the wines that are found in and around Cyrodiil originate here though I know little else about it. The city seems to be almost entirely walled and I quickly observed that there were an abundance of guards on patrol.

As I spoke to a few locals out in the street I suddenly found myself under attack as an arrow glanced off of my shoulder armor. Thankfully before I even spun around several of the aforementioned guards were pursuing the criminal and quickly slew him. I have no idea why I was under attack – was this an accident, perhaps a case of mistaken identity, or was I the target of a failed assassination attempt? 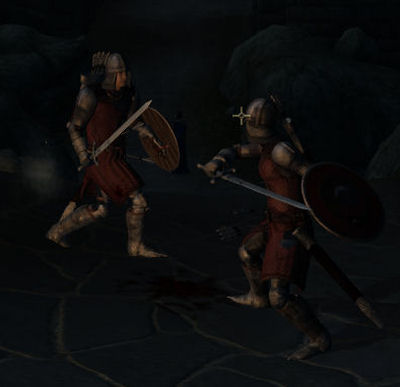 I didn’t have time to reflect on this, however, as the guards soon started to turn on each other. What was this? Conspiracy? When the dust settled two guards had been cut down in the streets. I’ve no ill will towards the guards nor the people of Skingrad but opportunity knocked and I looted the downed guardsmen after the public grew disinterested in the scene.

Wow, I’ve only been in this city for few minutes and I’ve already stumbled across some strange, strange stuff.

As Elder Scrolls veterans might suspect the guards were attacking each other because of some friendly fire while they were trying to catch the thief NPC. Oops! Nice loot though.