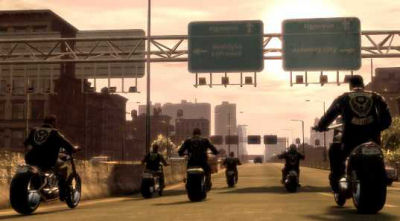 “Tonight there’s gonna be a jailbreak… somewhere in this town!”

I beat Grand Theft Auto 4: The Lost and Damned last weekend. I don’t have a lot to say about the ending – it wasn’t disappointing but it wasn’t as good as I felt like it could have been. Still, great game and, again, worth the 20 bucks if you’re a GTA fan. Oh, and I loved the ending credits which showed these slow motion, panoramic, birds eye views of scenes from both GTA 4 and TLAD and how some of them tied Niko and Johnny together. Very enjoyable.

The next game I’ve picked to play out of my Xbox 360 backlog is Battlefield: Bad Company. I’m a big fan of the series starting all the way back with the original Battlefield 1942 on PC but I’ve never really got into any of the attempts to bring the series to the console. I played a healthy amount of the demo of the Xbox Battlefield 2: Modern Combat and watched some friends play the Xbox 360 version when it first came out but these console version just never seemed to be as appealing to me as the PC versions. Bad Company, built from the ground up as a console game with actual effort being put into the single player mode, seemed like it could be a good opportunity to break the mold and indeed reviews of the game were pretty favorable.

The game greets you with an awesome little lounge tune on the menu screen that feels humorously out of place for a war game (obviously intentionally) and brings in some nice cinematic cut scenes as you kick off the campaign. A great first impression. Once I got into the game, however, I was immediately sapped by the odd field of view the game gives you – it seems super narrow and therefore feels unusually zoomed in compared to most first person games. This wasn’t a problem, per say, it just took a little getting used to.

Once I played around in the game a bit I was quite impressed by this new “Frostbite” engine that DICE put together. The graphics look pretty good with some interesting lighting and shadow effects. The maps are fairly large and the draw distance seems quite respectable. I didn’t really notice any crazy pop in or other issues like that either – in fact the only real immersion breaking thing I ran into was the disappearance of destroyed vehicles after a couple of minutes – it seems rather odd for destroyed vehicles and dead bodies to vanish when so much effort has been put on making the environment destructible. You can knock the side off of the building and it’s gone for good, yet the wreckage of the giant heavy tank next to it vanishes into thin air? Eh, that’s a little knit pick I suppose. 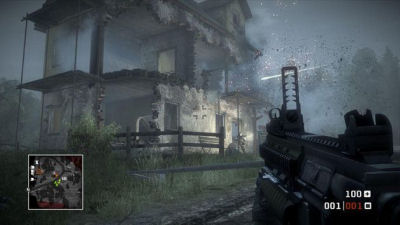 Speaking of the environmental destruction though… Wow! It’s great. Trees, signs, fences, etc. all (finally!) fall down when your tank goes barreling into them. Some shots even seem to leave craters in the ground. The experience of walking through a forest only to have a group of trees suddenly fall all around you from a surprise cannon blast is totally unique to say the least. The world doesn’t necessarily feel too delicate though – your dune buggy won’t be knocking walls off of buildings and you’re not going to spray your assault rifle into a forest and watch dozens of trees come cascading down.

As far as buildings go I was pretty skeptical at first given that you can’t blow up everything. Indeed, only certain walls will blow out – you can’t completely knock a building down to it’s foundation or anything that drastic but it is an still extremely effective. With tanks firing cannon rounds, helicopter firing rockets, and soldiers lobbing RPGs and grenades all over the place in a lot of these fire fights it is great to actually see some tangible destruction as a result.

There was at least one occasion where a couple of enemy soldiers were holed up in a barracks and the door was on the other side of the building from where I was standing. I decided rather than go around the barracks and risk getting shot at from the windows just to lob a M203 round at the side of the wall and walk straight in. There have also been a few occasions where the illusion of safety presented to me by taking cover behind a wall in typical video game fashion suddenly went out the window as the wall I was hiding behind crumbled down and I was left completely exposed. On the other end of the spectrum during one firefight I was dashing between buildings evading enemy fire when an enemy chucked a grenade at me. It didn’t injure me notably but it did destroy the wall to a building behind me suddenly revealing another enemy who, apparently finding his morning shave to be much less of a priority, started firing on me from my other side. Neat.

Beyond the destructible environment the engine seems to have quite a lot of nice effects that help the action feel more alive. On that front the sound in this game is also great. While I wouldn’t suggest that the sounds themselves are particularly realistic they’re very satisfying. Thumbs up to the responsible parties at DICE.

Guns feel pretty good though I do wish the damage was a little higher. I just hate having to pump half a magazine into a dude to kill him. Vehicles, so far, feel decent enough though the controls took a bit of getting used to. I’ve still yet to climb into a chopper at this point though. The controls for on foot are pretty good though – you can swap between weapons with the right shoulder button and between other gear with the left. The right trigger fires while the left zooms to your iron sights. The other gear I mentioned can be anything from C4, RPGs, and laser designators to your trusty healing syringe. Melee (a knife) has it’s own button but seems to deploy a little too slowly for my tastes, especially after playing Halo 3 recently. 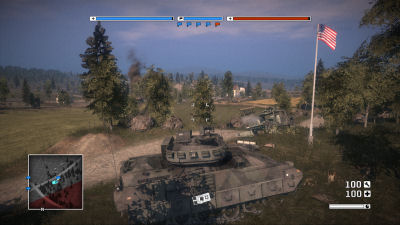 The healing syringe system is pretty different – you can switch to this item and heal yourself completely with the press of a button as often as you like. While there is a recharge timer to keep you from spamming your heal it is pretty short. It kind of reminds me of a manual take on the whole Halo shield recharge system that so many games have barrowed over the years. As silly and unrealistic as it is I think I actually like it. Speaking of health, when you do actually die you don’t really incur much of a penalty. You’re basically revived a short distance from where you died, with your squad, with everything you did just before dying persisting. Between those two features you can feel pretty invincible at times even during some of the more difficult sections that have you healing and respawning constantly.

Your squad mates have it easy too. They never really die, they don’t need to be healed, and they’ll even rubber band to your position when need be. In fact as soon as you hop in a vehicle, no matter where they are on the map, they’re in it with you. Pretty unrealistic but it works well enough. On the other hand it does give you the impression that your character is the focus of the game despite the story telling you otherwise – that is, your character is the new guy in your squad and you’re certainly not the leader, yet your squad mates follow you around and never seem to object to any decisions you make. To be honest this stood out as feeling a little odd to me from the very beginning – your squad leader pretty much only actually leads in cut scenes. Ah well, at least these AI squad members are actually capable of killing enemies from time to time.

One last thing to mention is the humor. I honestly thought there would be a lot more of it. Sure, there are a few funny lines here and there but what little comedy is there often fails to impress me and I’m certainly not one of those people who is exceedingly snobby when it comes to humor. Probably the opposite, even.

I’m about half way through the game and looking forward to wrapping it up relatively quickly. I haven’t even stepped foot into multiplayer which is a significant portion of the game, if not the focus. It seems to have a lot of great features and, given the rest of the game, could be great. If I started playing it when it was first released and/or had friends playing it on a regular basis I could definitely seem myself dumping a considerable amount of time into it but most likely won’t even try it during this playthrough.