The current game on my Xbox 360 backlog hit list is Grand Theft Auto 4: The Lost and Damned expansion. Wow, something semi-current?! Yep. I’m only about half way through with it at the moment so don’t expect a full review here but I’m really enjoying it so far. It’s definitely a much more interesting piece of content than I thought we’d end up with way back when I first found out that the 360 would be getting some extra GTA 4 content and it’s definitely worth the 20 bucks if you’re a fan of the series. 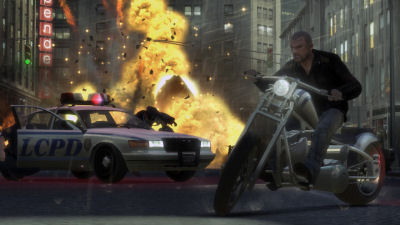 “Not at all conspicuous.”

As I’m sure almost everyone who is still reading by this second paragraph already knows TLAD is essentially a whole new game – a new cast of characters, a new story, a slight change in focus from GTA 4, and there are even some features of GTA 4 that have been removed from TLAD for various reasons. One of my favorite things about this new side story is that it isn’t very long. While some people might take issue with that for me it means the game’s story should resolve itself fairly quickly and hopefully by that time the repetition of playing the same typical GTA missions over and over again won’t have reached the point of tediousness yet as it occasionally had in past GTA games.

A small change but one well worth praising is that missions tend to have more check points. It’s now much more likely that if you’re doing a long, multipart mission and fail you won’t have to start over from the very beginning. This makes failing much less aggravating – something I complained about in past comments about GTA 4. In contrast I was doing some side missions (the optional missions Stubbs offers, for the record) which didn’t have this feature, in fact they didn’t even have the usual text message retry feature at all and failing those, even a few times, annoyed the hell out of me. These check points should be in every mission, even the ones that don’t feature any real story such as the collection and gang war missions. The number of times I’ve gotten smoked in a gang war is ridiculous (I’m a bit rusty at GTA 4’s combat system, I admit) and the ability to retry one, starting over just after collecting my gang members, would make them so much less painful.

Back to the important stuff though. I’m really enjoying the story and the new characters so far. The whole biker gang angle is something fairly new to GTA and feels pretty fresh. Johnny is probably a more fascinating character than a lot of people give Rockstar credit for – I’ve read a lot of comments accusing him of being a violent, bullying scum and all around low life but, while that might not be completely off base, it is clear from the power struggle between Johnny and Billy, amongst other things, that Johnny is in no way that one dimensional of a character. The same goes for some of the other Lost members as well. 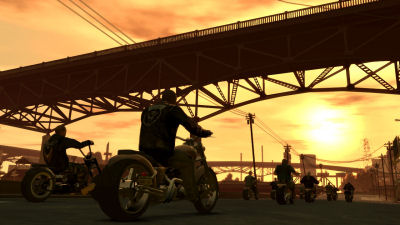 “Riding off into the sunset…”

I also dig the bikes. I thought the motorcycles in GTA 4 were more fun and less of a liability than those in past GTA games and would often have Niko nab one for quick runs through the city. Sure, they still hurt like hell when you wipe out on one but it is generally easier to avoid collisions thanks to their small footprint and high degree of maneuverability. I’ve got to comment about the apparently improved physics of the bikes in TLAD though – I don’t see it. They feel more or less the same to me as they did in GTA 4 proper and there are still some physics oddities, maybe even more. While every single time it happens I find it damn hilarious when my bike hits a tiny bump and is suddenly catapulted 50 feet straight up in the air my amusement quickly turns to concern as I realize I’m probably going to take some significant damage as well as be knocked off my bike when I land. If this happens in the middle of a difficult mission you’ll be ready to throw your controller through your TV. Thankfully it doesn’t happen too frequently but it still occurs enough to mention.

On a final note I did make it to the infamous penis scene. I talked about it quite a bit on last week’s podcast. To clarify my level of interest and excitement about the subject I’m not any kind of cock enthusiast, rather I felt like it was somewhat of a milestone in gaming. Male full frontal nudity displayed in such a way in a mainstream game? I think some sort of new barrier has been broken.