After my very exciting first night in Skingrad I’m gently woken by the bright morning sunlight and the sound of singing birds chirping merrily outside of my window. I gear up, purchase some fresh fruit from the tavern keeper to eat throughout the morning, and after a quick visit to a few of the city’s shops, am on my way.

I had decided to continue traveling, without much of a goal, towards the northwest. As expected I come across a few odd caves, shrines, and ruins, but, as usual, decide to steer clear of exploring them due to the almost guaranteed chance of them inhabiting vile bandits or, worse yet, monsters or beasts. Instead I take the opportunity to forage and hunt and only have to worry about the occasional encounter with wandering creatures and bandits. After a particularly painful fight against a group of bandits who attempted to ambush me while hunting wolves I decide to head back to he city to rest. 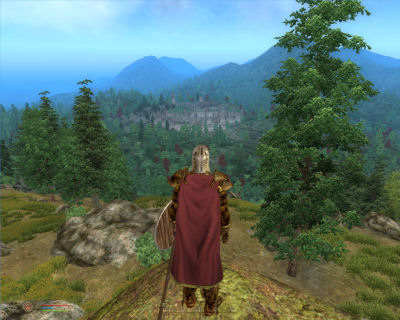 “Admiring Skingrad out of the reach of its psychotic guards.”

After spending the afternoon and much of the evening recuperating I decide yet again to head out. This time I decide that it would probably be wiser to stick to the roads. As I start out on the western road from Skingrad I’m surprised to be almost immediately ambushed by highwaymen. These bandits are either very confident in their abilities or very stupid to be setting up camp so close to a known route of frequent imperial patrols. After a quick but violent battle I soon find my answer – stupidity. I loot their valuables and continue down the road leaving a trail of corpses strewn behind me. 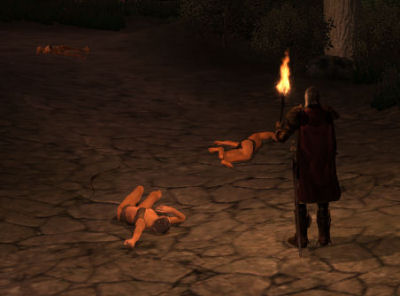 I come to a small cave nestled right beside the road and let my spirit of adventure take hold. What harm could a quick poke around cause? As the cobbled together wooden door of the cave creaks open and my eyes adjust to the darkness of the narrow corridor I immediately know that this place is most likely still inhabited. I encounter a few imps but nothing that can’t be easily dispatched until, that is, I reach what appears to be the treasure room of the cave. It is guarded by a fearsome gargoyle and it takes every ounce of my ability, both as a magician and a swordsman, to defeat it. Upon reaching the treasure chest the beast was guarding I come across a grizzly sight… 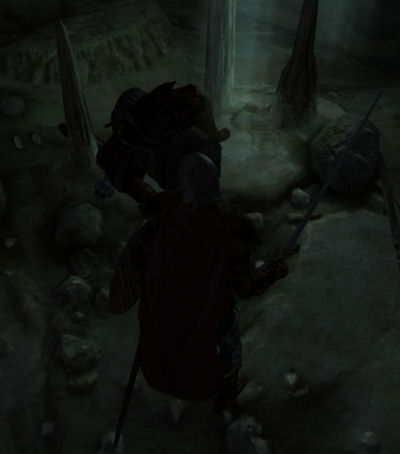 “Sometimes you really don’t need to use a spell or ability to know when a chest is trapped.”

The gargoyle, luckily, kept getting stuck on the geometry of the door between the room he was in and the corridor I occupied, making this fight much easier than it probably should have been.

As I fill my bags with what is, ultimately, an unimpressive selection of items I note that the entire corridor opposite me has a very, very high ceiling, yet the corridor walls only reach a third or so of the way up – there’s a second level to this cavern! I search for nooks, hidden passages, and any other ways to access this second floor that I might have missed but come across nothing. Annoyed, I leave the cave and continue on the western road.

I had only walked a short while before I spotted the tell tale sign of grey smoke winding slowly against the near black sky. As I approach its origin it becomes clear that I have found a second entrance to the cave system that I had just been in. I swing the cave door open to be greeted by a giant bonfire burning fiercely in a rather large, and of course smoky, chamber. I encounter many more creatures, mostly varieties of imp, and as I venture deeper into the cavern the system of chambers becomes more and more elaborate.

Perhaps it should be noted that in OOO there are many varieties of imp, including crazed imps, mystical imps, and the rather tough gargoyles. 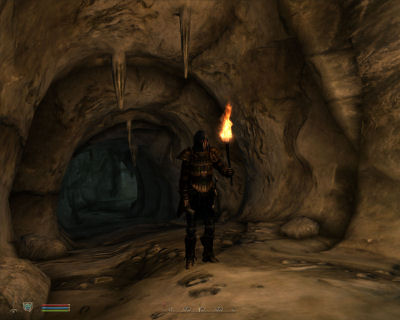 “At this point I’m wishing this were a steampunk game so I could just hop on the fucking mine tram.”

When I finally reach what I’m sure is the last treasure room of the structure I face yet another gargoyle. This time, however, it pulls an unusual trick. After trading blows with it for sometime the creature simply disappears – unlike most forms of invisibility magic that I have witnessed there is absolutely no trace of the fiend save for the pain of his fiery magic and its small but extremely sharp claws. I make a few wild swings towards what seems to be the origin of the sound of its leathery wings flapping but hit only air – I have no recourse but to run for my life. Indeed, I’m bleeding badly, struggling to keep pace when I unexpectedly trip on a rock and tumble head first into a small creek that runs through the middle of one of the larger chambers. The unpleasantly cold temperature of the water is actually rather sobering. As I snap to my senses I somehow make out a source of light shining through cloudy sediment filled water coming from upstream, under the rocky walls of the room. It is a risky maneuver but I decide to swim for it.

Note that as far as I know this gargoyle turning invisible was a glitch. It almost seemed like he was stuck in the ceiling, below the floor, or something odd like that. He followed me wherever I went, was able to damage me, and I couldn’t seem to lay a finger on him. Role playing aside, running away really was my only option! 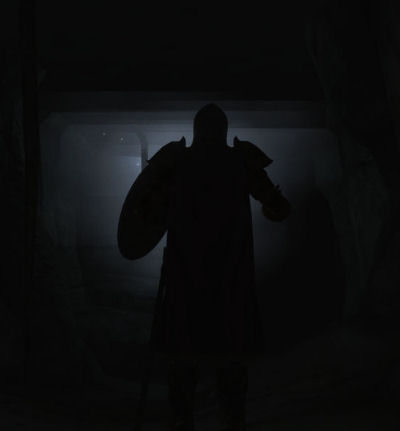 “Crap! If I drowned now I won’t even be able to get a good screenshot of my corpse.”

After a short swim I finally make it to another open room. I drag myself out of the frigid water and tend to my wounds. This was a close one. As I search my knapsack for a vial of healing potion I hear the distinct snarl of a wolf echoing through the chamber. I jump up to my feet and pull my sword from its scabbard but see nothing. I cautiously creep through the chamber until I see a smaller, connecting room that is chock full of unpleasant looking creatures.

The wolf immediately catches my scent and darts towards me, joined by two mystical imps. This is no normal wolf, however, but some sort of spectral wolf. My blows do little to harm it and soon I’m forced to retreat back into the water. The wolf, crazed by the taste of my blood, perhaps, dives in after me. Luckily the creature cannot maneuver in the water as well as I can and after a long, tedious battle I’m able to slay him. I emerge from the water to do battle with the imps. Finally, it is only myself and a lone gargoyle left. I summon a scamp to aid me and quickly pepper the gargoyle with a barrage of flame spells. Although it takes quite some time, with my magic all but depleted, I finally slay the creature.

I certainly have no plans to chronicle every fight Garn gets into but this one was amazing. The entire fight probably took me over 30 minutes of trial and error, reloading, etc. The wolf, the imps, and especially the gargoyle were all extremely challenging and obviously intended as an encounter for higher level characters than I was at the time. 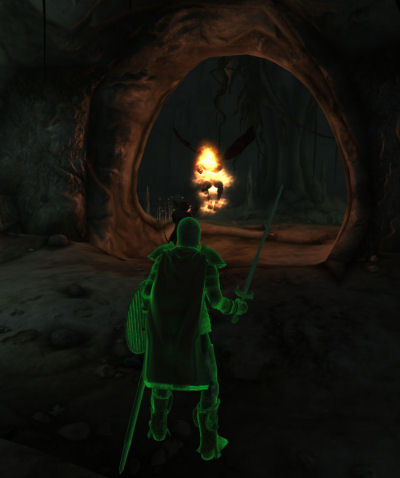 “I see your green glow… thing… and raise you incineration!”

There are three chests in this room and each one is filled with more impressive loot than the last – all manner of magic items and other, miscellaneous valuables. That hard fight is suddenly all worth it.

Note that I turned off OOO’s security skill requirements in order to loot these chests. I understand and appreciate the idea of the change but given my limited play schedule it seemed like it would be far too much trouble to have to worry about raising my security skill before ever being able to loot anything.

If you don’t already recognize my vague description of this place it is Fyrelight Cave. I actually set OOO’s leveling rate back to Oblivion’s default rate after going so long without leveling (again, taking my play schedule into mind) and managed to gain 3 levels entirely in Fyrelight!