I ran into some remarkable frustration earlier this week as I continued my play through of Ninja Gaiden 2 on Warrior difficulty. I had just beaten a mid level boss in chapter 6 and decided to push ahead to the next save point so that I could make sure my game was saved one last time and get to bed.

Sounds easy enough, right? Well of course not! I ended up spending over an hour, wishing hideous acts of violence upon Itagaki, trying to reach this next save point.

After the boss battle I was met by several fiends, including the annoying scorpion variety that I had mentioned in my last game log, as I climbed upwards along the rocky paths that lead out of the cavern where the boss battle had taken place. Thankfully I quickly developed a fairly dependable strategy of dealing with them with a minimal loss of health.

There were also a few jumps that could be tricky to pull off when being harassed by enemies. Failed jumps themselves were not deadly but would result in a free fall back to the bottom of the cavern. This was most irritating early on in the process when I had made it to the very end of the journey only to fail to stick my last landing and fall all the way back down to the beginning. 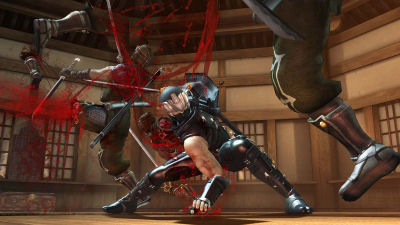 This is where a fairly new enemy, the bone scorpion, comes into play. Bone scorpions aren’t particularly tough enemies yet they appear in such numbers in this section that killing them was quite time consuming and usually resulted in some damage to my health bar along the way. The big annoyance here is that after falling back to the beginning they respawn for some reason. The attrition of my health bar after repeated falls was a frequent cause of death. After awhile I began attempting to simply run past as many of the bone scorpions as possible though this didn’t always work out for the best. If I wasn’t quick enough they’d usually catch up with me in a deadly mass and overwhelm me.

Finally, while the game generously auto-saves at the beginning of boss fights to allow you to replay them easily it evidently doesn’t see fit to save afterwards. This meant that I had to replay this boss battle over and over again. Perhaps the most annoying factor was that I easily schooled this particular boss the first time I fought him. A great deal of our subsequent battles, however, were major struggles. Even when I did survive them I had often used a costly number of my health scrolls in the process.

This all added up to be the most controller breakingly angry I had been while gaming in quite a long time. While I did eventually succeed I’m now, not even half way through the campaign, left thinking that I may be playing through this game for a much, much longer time than I would have ever predicted.