After another few days spent in Anvil I felt that I had worn my welcome and decided to ride back towards the east. As I rode slowly out of the Anvil gates I noticed a farmer woman tending to her crops, only the way she was doing so caught my eye. The woman was violently swinging her hoe with a deep hatred in her eyes. I slowly approached, at first curious about exactly what (or who?) she might be swinging at in such a manner. It turned out it was indeed just the soil. The woman noticed me and looked up, at first with the same angry expression though it quickly changed into a much friendlier one. She politely asked me if I was an adventurer and if I was available for work. 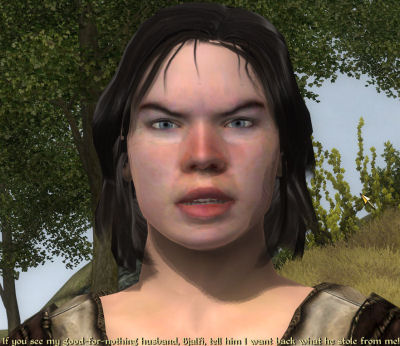 “No, I have no idea why he would have wanted to leave you.”

Curious about whether or not this related to her strange demeanor I inquired further. The woman, she told me her name was Maeva, explained that her husband, no longer content with a boring life of farming, had stolen an enchanted weapon, a mace named Rockshatter, from her and abandoned her to join a gang of local bandits. The weapon was apparently a family heirloom and she was looking for someone to get it back for her. She was offering a surprising amount of gold coin as a reward so I agreed to assist her despite it seeming like a somewhat trivial task. She told me that the gang makes the nearby ruins of Fort Strand their headquarters and that I’d most likely find her husband and her mace there. She provided no hint of concern for her estranged husband’s safety.

Beneath the ruins of Fort Strand lay a twisting maze of crumbling passageways and rooms. The gang the farmer woman had described was quite a bit larger than I had first assumed though I was able to slay most of them without much effort as I slowly worked my way through the corridors. When I finally reached the bottom level of the fort I faced quite a tough battle against the inner-circle of bandits there which including one wielding Rockshatter. In the end I stood victorious. I took the mace and returned back to Whitmond Farm.

Maeva was not happy to hear about her husband’s death but didn’t seem to be in a great deal of grief over it either. She handed me a small coin purse and mentioned that another local farmer, Thorley Aethelred at Shardrock Farm, might also have work for me. 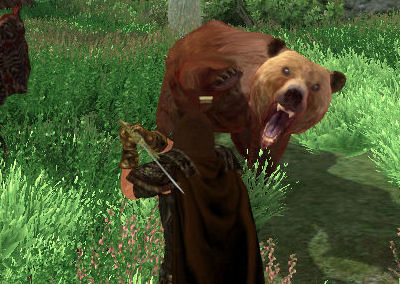 As I was headed his way anyway I paid Thorley a visit. Shardrock Farm was a quaint little farm with several animal pins nestled next to a small pond with a grand view of the northern hills. Thorely was startled, drawing a short sword and yelling that he had nothing of value when first casting eyes upon me. After I explained that I had heard he needed work he chuckled and explained to me that while he has little trouble in his area his sheep had recently been harassed by a group of mature West Weald Bears. This particular type of bear, he explained, was far too tough for him to take care of himself. I had come across this type of bear in my previous travels and understood his situation. He had little to offer me but after showing me some of the possessions he’d part with in return for the work I found an ancient tome of sorcery that I thought might make it worth the effort. 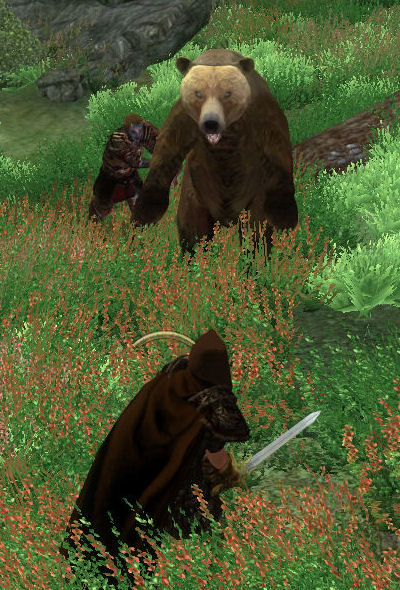 Thorley wasn’t exaggerating about the bears, they were incredibly vicious beasts – probably the toughest I’d faced yet. Luckily they were spread apart enough that I was able to heal myself and summon fresh assistance between skirmishes. After slaying the final bear and preparing its pelt to bring back to the farmer as evidence he rewarded me and sent me on my way, mentioning to me that I might want to check with Slythe Seringi at the nearby Shetcombe Farm.

Upon reaching Shetcombe Farm I discovered it to be thoroughly abandoned. The farmhouse itself offered little clue to the farmer’s whereabouts at first until I discovered a note – a page ripped from Slythe’s journal. The journal entry on this page painted a picture of a troubled man who blamed all of the troubles of late, not the least of which the Emperor’s assassination, on his god, the so called Sunken One, being displeased with mankind. Slythe noted that he believed that The Sunken One perhaps needed an offering to appease it as in years past when his father before him saw to the very same task. It seemed as if Slythe has taken a collection of his valuables to a nearby site to make this offering.

I darted to my steed and galloped off through his fields and into the surrounding wilderness. Soon I discovered an old cave entrance that looked like it had been freshly disturbed. The path leading into it suggested that it was either the place I was looking for or I was about to be wandering into the middle of a bandit hideout. I drew my sword and raised my torch and cautiously crept into the cave, which soon opened up into a fairly large cavern filled with dusty, twisting passages. 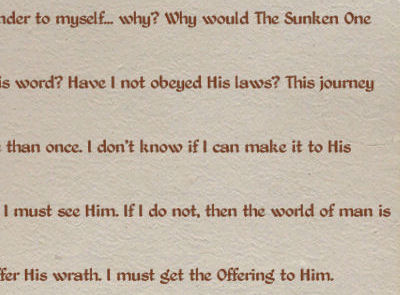 “A sample of page 2 of Slythe’s journal.”

After slaying another already rather agitated monster I knew I must be in the right place and that Slythe had been here, perhaps even only moments ago. Soon I discovered another page torn from his journal. This entry seems to recount his dangerous journey through the caverns – one that he apparently barely survived. At this point the outlook didn’t look too good. 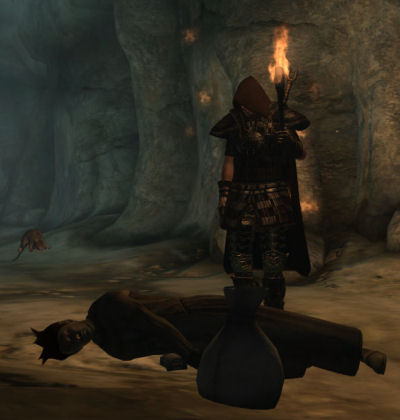 I continued on through the maze of rocky passages, battling the occasional cave dwelling monster until I finally found him. Laying face down near in a wide passage lay the body of Slythe Seringi. The apparent offering, a small sack with a lackluster assortment of gold pieces and poor quality gemstones – most likely his entire life savings, lay by his side. Clinched in his hand lay a final journal entry. It explained that he had been ambushed before being able to make his offering to The Sunken One. I briefly thought to myself about Slythe’s mental state before I was interrupted by the sound of rocks shifting behind me – a cave in?

I quickly turned to find my point of exit as to prepare for my escape yet it wasn’t a cave in that I saw at all. It seems as if The Sunken One was real after all, though not a god per say, but as an atronach. I know little of atronach except that, like many of the creatures I’ve learned to summon, they are daedra and they are often quite fearsome. I pulled my sword from my back just as the fiend roared with rage and shot a shocking bolt of energy in my direction. I parried its giant rock arm as it swung powerfully down towards me and cleaved my blade heavily into it. It swung its other massive arm causing me to jump backwards and roll to the ground to avoid it. I then unleashed upon it with a flurry of my own magics, soon bringing the creature to an end. 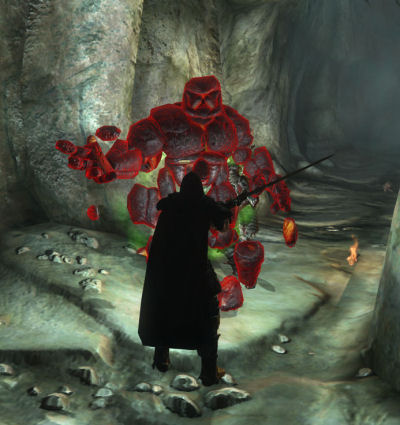 I suppose I’ll never know if this creature was really The Sunken One that Slythe and his family before him and feared and honored as a god but if so vengeance was now theirs. I gathered up Slythe’s would-be offering as payment for my troubles and began to backtrack. I had second thoughts about leaving Slythe’s body deep in this cavern eventually to be eaten by the rats and spiders. Instead I drug his corpse out of the cavern, slung him on my horse, and eventually deposited him back into his house. I was hopeful that a friend or, at the very least, a guard, would find him soon enough and give him a proper burial.

I knew one thing – I’d had enough of farm life for awhile. It was time to ride back towards the east as originally planned.

At this point thanks in large part to purchasing training at every available opportunity I had managed to make it up to level 21. Hopefully in another 9 or 10 levels I’ll be at the point where the vast majority of the non-leveled creatures I run into will stop kicking my ass.