Feeling it time to make my leave of the city of Chorrol I began to travel to northeast towards the city of Bruma.

As I was exploring some ancient ruins I discovered a chest. Most of the chests left around ruins, especially on the surface, belong to bandits and other newer inhabitants and rarely seem to contain anything of interest and this one seemed no different at first though the skeleton of a long dead warrior next to it did at least give me pause to take extra caution whilst opening it. 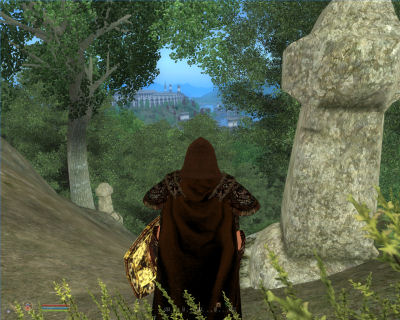 The chest contained only a key and a scroll. The scroll contained a small note – something about “the sword pointing the way.” I admit while I’m not one for riddles I was of course intrigued. Though I didn’t recall any sword bearing statues or anything else which might have guided me to the answer to this riddle I scoured the ruins regardless. Finally ready to give up I returned to the sight of the chest one last time and almost tripped on the silver long sword of the dead warrior. Of course! I took the warrior’s sword (as it was a fine enough blade to sell later) and began to carefully walk in the direction it had pointed. 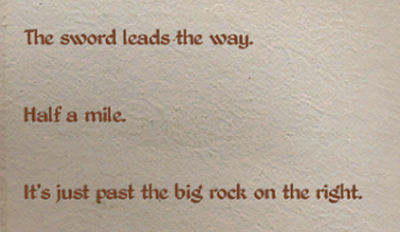 “Ok, maybe it isn’t that difficult of a riddle.”

I reached a large boulder on a hillside with a magnificent view of the Imperial City in the river valley below. Nestled beside the boulder and some other, smaller rocks sit another chest. I carefully searched around the still locked chest for any sign of hidden traps such as pressure plates or trip wires. Nothing. I unlocked the chest and it only contained a fine dagger, some gold coin, and another riddle like note. Having enough of these puzzles and feeling ever more like I was walking headlong into a trap I continued on my journey.

I soon wandered back into relative civilization onto the Red Road in the Heartlands north of the Imperial City and into a small farming village called Aleswell. Dark was quickly approaching and walking Cyrodiil’s roads had often proved to be more excitement than I was wanting at the time so I stopped at the tiny Aleswell Inn. Unfortunately the innkeeper was nowhere in sight – in fact, no one was anywhere to be found in the entire village. I was both confused and cautious and my heart almost jumped through my ribcage when a disembodied voice broke the silence and greeted me. Soon, along with the sounds of creaking footsteps, more voices joined in. 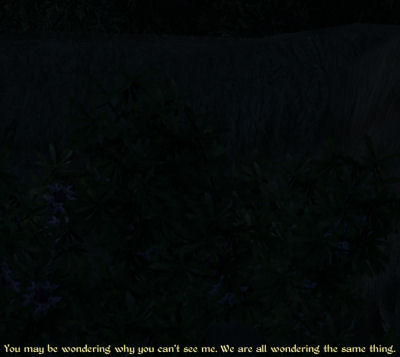 “And you thought some of my other screenshots were dark!”

It turned out that the entire population of Aleswell had been turned invisible and although they didn’t quite know how or why they unanimously seemed to suspect a wizard named Ancotar who had moved into some nearby ruins a relatively short time before this. They asked me to check into it for them, promising a reward if I were able to cure their strange condition. Although I suspected the people of Aleswell didn’t have much to offer an adventurer of my growing stature other than some food from their impressive fields I decided to take up their cause anyway.

I wandered down to the ruins of an old fort and as I quietly crept towards the entrance I was attack by not one by two invisible creatures. As I began to fight I quickly recognized them as common bears. I remember thinking it highly unusual that even the wildlife there was invisible. After all of the commotion of fighting them off I kept my sword drawn and entered the ruins with much less of a concern for stealth. Although I found what appeared to be a small camp belonging to the mage on the second level I found no sign of the man himself. As I ascended the steps to the third story of the ruined tower, however, an invisible figure ahead attempted to frighten me away. I was sure this was no spirit, however, and figured that the mage himself must be invisible too. 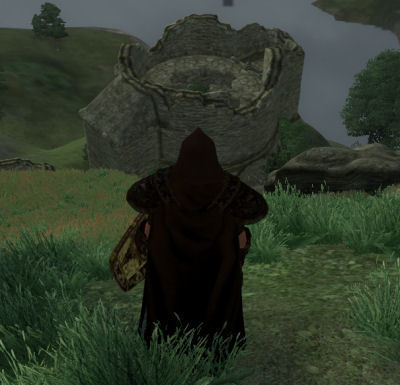 “Not the nicest magic laboratory I’ve ever visited.”

When I question him about the invisibility it appeared that Ancotar was unaware about the plight of the villages, intending only to make himself invisible so he’d be left alone to attend to his studies. He reluctantly gave me a scroll to reverse the effects and sent me on my way.

As I returned to the villages the people of Aleswell gathered around me in a strange, shimmering circle. As I finished reading from Ancotar’s scroll suddenly the shimmering around me gave way to reveal the true forms of the villagers. Although some of the people of Aleswell were indifferent to being cured of the inconvenience of being invisible, most were very happy to be rid of their curse. The inn keeper perhaps most of all, as he rewarded me with free lodging for life at the Aleswell Inn. Not quite as grand of a prize as many might quest for but something I could definitely make use of, starting with that very night.