In the morning I made my goodbyes with the people of Aleswell and continued on my journey, heading north along the Silver Road and soon arriving at the city of Bruma. Embarrassed, I had wondered if the people of Bruma, specifically the guard, remembered me from the run in I had with a frost titan last time I was in the city. Thankfully no one seemed to recognize me or, if they did, they kept it to themselves.

I quickly sank into what was now becoming a routine of chatting with locals about rumors and other local going-ons, and casually mentioning that I was looking for work whenever possible. My main target was usually the local inns and bars as they were the easiest places to be social without drawing to much attention to myself – that, and the fact that drunk men often can’t hold their tongues is a useful bonus. 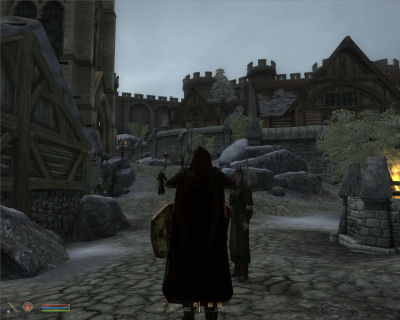 “Relax guys, I’m not dragging a vicious monster behind me this time.”

One rumor I was consistently hearing was that of some domestic trouble between an Imperial named Arnora Auria and her Nord boyfriend Jorundr. Apparently Jorundr had stolen a bunch of her gold and got himself arrested as a result. Not only was she out her fortune but her love was now imprisoned. While I wasn’t particularly impressed by this story I couldn’t help but feel that the very presence of it on so many people’s lips seemed to indicate that there was more going on. I paid Arnora a visit.

As I suspected Arnora seemed poised for someone to approach her about these rumors and quickly dispensed with several more details of the story. She claimed that her and Jorundr were both thieves and when there marks started getting larger and larger she wanted to get out of the arrangement, yet Jorundr intimidated and coerced her into sticking around. Apparently the pair had scored quite a haul of loot on the night that he was arrest. Arnora wants me to speak with him in jail and attempt to find out where he had hidden it as reparation for her treatment. She promised me a large cut of the value if I could help her recover the loot.

I was rather suspicious of Arnora and her motives but not only did I need money but I was here for adventure and it seemed that this task might lead to some. I visited Jorundr in the Bruma Castle Dungeon.

Jorundr was belligerent and refused to talk to me but while I was there I overheard some other prisoners discussing the slaying of a vampire by a professional vampire hunter that very night. Vampire hunting sounded both rewarding and incredibly exciting. I decided to pursue this rumor and see if I could introduce myself to this vampire hunter and possibly join him.

For the record to complete this quest involving Arnoa and Jorundr it seems I would have had to get myself sent to the Bruma jail the hard way. Unwilling to set Garn on a life of crime (yet) I abandoned the quest for now and moved on to the next one… 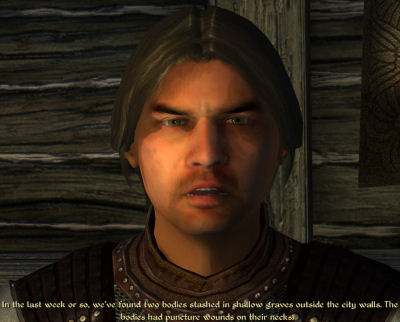 After canvassing the city I learned of the location of the slaying – a villager named Bradon Lirrian’s house. As I reached the scene I saw several guards mulling around the premises including a man who identified himself as Carius Runellius, the investigator. While at first he refused to discuss the killing after explaining to him while I was there he eased up a bit.

According to Carius several bodies with bite marks in their necks were found around the city recently. The city had just begun their investigation when a Dunmer vampire hunter called Raynil Dralas entered the city and found the vampire who turned out to be Bradon Lirrian. The guards investigated his claim and it seems the citizens had only seen Bradon out at night. Furthermore, a body was discovered in the basement of his house. As if that weren’t enough the Bruma guard had also verified Raynil’s good work with the city guard of Skingrad.

While the story seemed pretty straight forward I couldn’t help but notice the presence of a woman at the scene. When I asked about her Carius told me that she was Bradon’s wife, Erline, and that she was suffering from a severe level of shock, most likely from unknowingly living with a vampire for so long.

When I spoke with Erline she didn’t seem to be suffering from shock at all to me. In fact she seemed quite far from it. However, she was very insistent that her husband wasn’t a vampire and that he had, in fact, been murdered. She told me that her husband simply worked at night and that alone didn’t make him a vampire. Carius scoffed at her claims and told me I could take a look at the scene if I wished.

When I entered the house I immediately noticed that the scene before me conflicted with what I was told. Carius said that Raynil had claimed to have snuck into Bradon’s house and killed him while he slept during the day. However, it seemed pretty clear that there was a struggle and that Bradon hadn’t been sleeping when he was killed.

I decided to continue my search for Raynil though now with a different purpose in mind. I searched high and low but was unable to find any sign of a Dunmer matching his description. A few people told me they thought he might be staying at Olav’s Tap and Tack inn so I made that my final stop. Although there was no sign of Raynil the inn’s proprietor Olav spoke of his own suspicions regarding the vampire slaying and eventually confirmed that Raynil was staying there and volunteered the key to his room so that I could take a quick poke around while he was out. 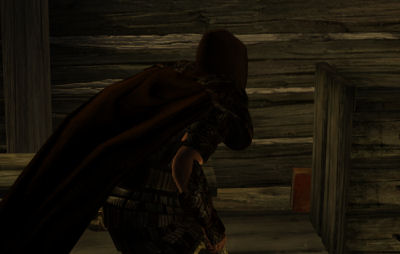 At first I found little of interest in Raynil’s room but soon I spotted an old, worn out looking book wedged carefully behind a dresser. The book spun a worse tale than I would have guessed.

The book was a journal belonging to a man named Gelebourne – the very name of the “vampire” who Raynil apparently slew in Skingrad. It seems that Gelebourne, Raynil, and Bradon were all part of an adventuring group known as “The Brotherhood” that plunder dungeons, ruins, and other dangerous sites for treasures.

It seems that one of the group’s greatest hauls was that of an Ayleid artifact that they suspected to be of such value that they didn’t immediately sell it. Instead the trio had a special chest made with three locks, with each man keeping a separate key for security. They hid the key in a cave near Bruma.

Now not only did I have my suspect but also my motive. Raynil obviously framed both Gelebourne and Raynil to get their keys and recover the treasure. I quickly snatched up the journal and brought it directly to Carius.

Carius was filled with sorrow about being partially responsible for the death of Bradon but that sorrow quickly turned into vengefulness and we hatched out a plan. Bradon knew of only one nearby cave the matched the description in the journal and suspected Raynil was probably there at this very moment. If the Bruma guard were to approach the cave Raynil would surely be warned of their approach and flee. Instead he suggested that the guard secure the city in case he attempted to return to his room at Olav’s and I go, alone, in their place. Fair enough.

I borrowed a steed from a guardsman and raced towards the cave. As I quietly approached I knew I had the right place as a few of the boards that had been placed over its entrance had been recently pried off. Once inside I could see Raynil preparing a camp. From the shadows I called out his name. 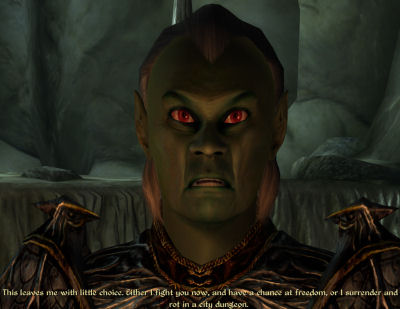 Raynil drew his sword and spun around. He knew who I was – he had caught on to my investigations and was planning on hiding out there in the cave until morning broke, or even longer if need be. He also knew how I had found him and cursed himself for not destroying Gelebourne’s journal once he acquired it. I suggested Raynil turn himself into the authorities but instead he seemed to think that my involvement would only delay his plans long enough for him to dispatch me.

Raynil was an excellent swordsman and had quality equipment as well. Still, after a lengthy exchange he lay dead on the cave floor. I retrieved the artifact and set back to town to tell Carius of what had transpired.

After Carius and a small retinue of his men left to retrieve Raynil’s body I spoke again to Bradon’s wife. She was extremely grateful to me for bringing her husband’s murderer to justice. I presented her with the artifact that Raynil had so desperately sought but she refused to take it. I couldn’t blame her, given the circumstances. She then revealed to me that Bradon had always suspected a day would come when one of his old group might turn to betrayal and had put a spell upon the artifact just before having it sealed away. She spoke a word of power and in a flash of light the Alyeid amulet turned from something rather unremarkable into a piece of obvious beauty and magical power. She asked me to have it, insisting that it was what Bradon would have wanted.

Not only did I accomplish bringing a murderer to justice but I was rewarded for it as well! Although I had yet to find a source of steady income my adventuring had been paying off quite satisfactorily.