The Horror of Dive Rock

It feels like it is time to leave the mead-soaked halls of Bruma behind and travel elsewhere. After a quick glance at a detailed map of the area in one of the city’s book shops I decide to take an indirect route to the city of Cheydinhal in the east. My plan is to head directly east until I’m more or less above the city and then head straight south. Hopefully this will help me avoid bandits.

I spend much of the morning purchasing supplies – rations, camp supplies, etc. before heading out of the Bruma gates. The trip through the snowy hills of the north is fairly uneventful save for a few attacks by wolves and bears. I spend most of my time trying to keep covered up and watching my footing on the often frozen ground. I spend the night in a shallow cave where I make a fire to stay warm for the night and gnaw on some awful tasting iron rations. 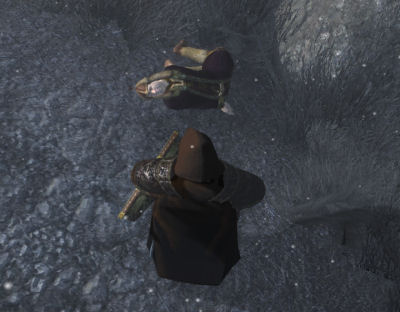 Eventually I come across a curious sight – the body of a man lying at the bottom of a massive cliff face. I search his body and discovered a letter from the man’s daughter. Apparently he was trying to climb to a famous spot known as Dive Rock. Obviously he slipped and fell here. I take a few of his belongings along with the note in case I should encounter one of his family members in the future.

Given that there has been a bit of a lull in the near constant snow storms in the area I decide to investigate this so-called Dive Rock myself. While I’ve certainly done a lot of hiking in the mountains so far given my bundle of armor, weapons, and supplies I don’t think I have what it takes to safely climb up a sheer cliff face, especially one covered with ice and snow. I decide to walk all the way around the base of the mountain and up some of the smaller foot hills to the northeast of it.

When I finally reach what I believe to be the top of the mountain the snow on the ground is thick and the snow is falling hard. It is becoming dark and my pace quickens – I must find a decent place to make camp before nightfall. Soon I see a campfire in the distance. While I attempt to be stealthy the sound of my boots crunching into the frozen snow is impossible to mask. Finally I get close enough to see that the camp site is surprisingly abandoned. 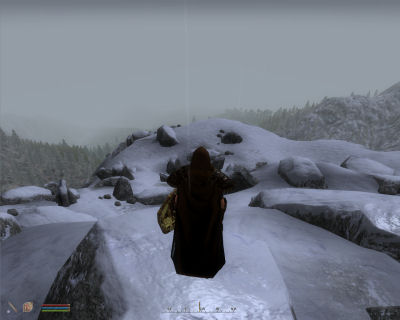 “A much more impressive view when it isn’t foggy.”

The campfire is accompanied by a tent that appears to be in good shape and I quickly take advantage of it, bedding down for the night. I try to sleep lightly in case those who were camping return in the night and aren’t happy to find me.

I wake in the morning with the rising sun bouncing off of the pure white snow and blinding my already sleep-dulled eyes further. It seems that I slept a bit heavier than I intended though with the exception of some more fallen snow the campsite doesn’t appear to look any different than it did the night before – apparently no one has visited. As I put my gear back on and warm up next to the fire I admire the amazing view from this point – I can see for miles!

I decide to take advantage of the fire one last time by warming up some wolf meat. It seems my stoking of the fire has melted some of the surrounding snow and I notice some objects left by the previous inhabitants of the campsite including a journal. The journal details a man and his wife on a quest to find and slay a creature known as the Uderfrykte Matron. Apparently they had tracked the creature to a nearby location. When finally making their attack the creature quickly and savagely slew the man’s wife, swallowing her almost whole. He retreated to their camp once more. Resigned to his fate he planned to return to the site of the attack and face the creature once again – he’d either have his vengeance or join his wife in the afterlife.

Given that the fire was still burning and the campsite seemed to be in good repair I figure that I had only missed the man by a matter of hours, if that long. Depending on how far away this creature lurked I might even be able to catch up to the man and assist him in his revenge. I gather my gear and head toward the area he described in his journal. 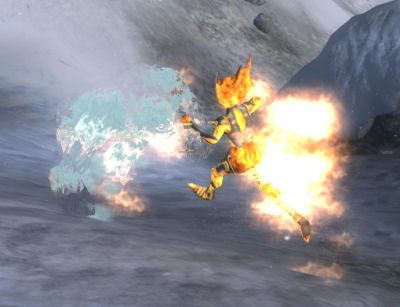 “Ice versus fire… who will win?”

As I crest the hill I see what must surely be the creature that the writer of the journal described: A large, troll like creature that shimmers with a magical looking frosty blue aura. As I stand staring at the creature in wonder it senses my presence and charges quick towards me. Taking the man’s own observations into account I quickly summon a flame spirit and then pepper the creature with fireballs. The atronach and the creature wrestle and I circle it, chopping at it with my own attacks from behind. Soon the creature lay dead, its weakness to fire aiding me to quickly dispatch it. 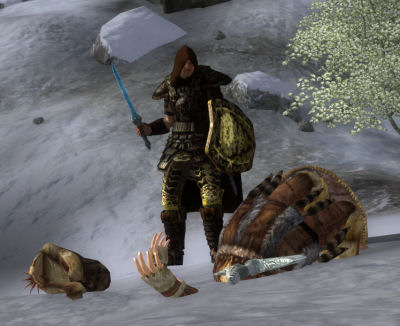 I take in the magnificent view around me one more time and start to head back down the mountain. This begins what feels like an unending decent, eventually leading me to the green, craggy river valleys of Cheydinhal County and soon enough I see the city itself.

As I walk through the impressively battle ready looking gates of the walled city my first order of business is to get a proper room at an inn and try to get dried off. Perhaps a good, warm meal is also in order…

While verifying that I was indeed spelling “atronach” correctly I stumbled upon an Elder Scrolls page filled with amateur (to put it nicely) pornography drawings of atronachs and other daedra. I’ve been using the Internet for almost 15 years now and I’m still amazed by some of the bizarre shit I come across.