A Brush with Corruption

After ending my long, cold trek through the northern mountains only the night before my less than luxurious accommodations at Newman’s Lodge in Cheydinhal felt more than worth the 10 gold pieces the establishment’s proprietor charged me for them.

I left the inn to scour the town for work but did so in a bit more of a lackadaisical way than usual as I had spent little time (that I remembered) in the city and knew little of its people and customs. One thing I did note right away, however, was that there was a strong Dark Elf influence here, from the buildings to the racial makeup of the citizens themselves. While I’d certainly guess the Dunmer of Cheydinhal are used to dealing with other races I still made a note to be wary. Up until now though the Dunmer I’ve run across haven’t been much more difficult than any other race to deal with and I’ve even enjoy listening to a few of them jabber on drunkenly in taverns thanks to their well known cynical dispositions.

Even treading carefully it took me practically no time at all to secure my first lead. It seems that the famous painter and Cheydinhal resident Rythe Lythandas had recently disappeared. While there are certainly many possible ways for one to “disappear” Rythe apparently rarely left the confines of his home, let alone the city walls. On a tip I visited his home to speak to his wife to see about the possibility of making my investigation an official job. Thankfully his wife, Tivela, was quite happy to offer payment and lay out the entire scenario for me. 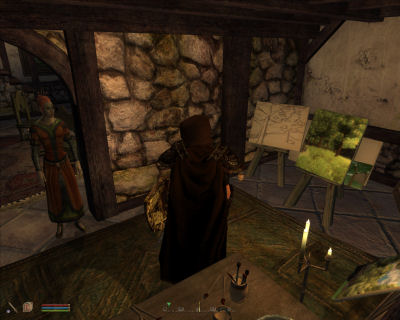 “I’m going to need some privacy for this next part, ma’am.”

Tivela explained to me that it was custom for Rythe to lock himself in his study when painting a piece and work, sometimes totally uninterrupted, for quite a lot of time. However, in this instance Rythe hadn’t been heard from in days. Concerned Tivela unlocked the room only to find it empty. This is where I began my search. There was no sign of any struggle whatsoever, and the only real clue lay in a freshly painted picture sitting his easel. As Tivela walked off to attend to another caller I touched the painting to check on the firmness and/or dampness of the paint when something miraculous happened: I was teleported to another realm! 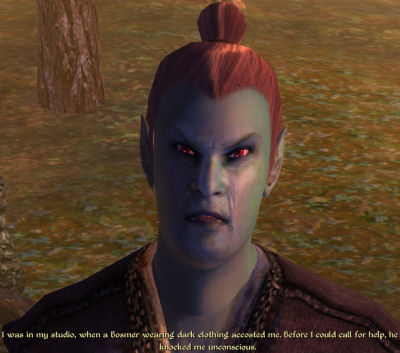 While it resembled The Great Forest something was amiss about the entire place – a haze of some sort lay over it, and everything appeared quite strange. I didn’t have long to take it in when a Dark Elf came racing towards me from behind some large boulders. It was Rythe himself. It took some prodding but eventually Rythe came out with the entire story. He had inherited a powerful enchanted paint brush which let him teleport to within a canvas and conjure anything he wished in painted form. This let him paint astonishingly realistic paintings in very little time without the need to posses any actual skill in painting. 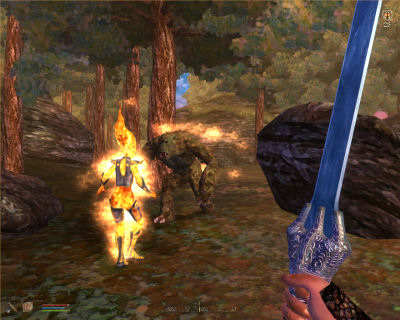 “If only I had some turpentine!”

According the Rythe a thief broke into his study, stole this paintbrush, teleported into his painting in progress, and painted some trolls in order to protect him. The thief’s plan, if he ever actually had one, had backfired however and the trolls slew him. Rythe, desperate to escape, begged me to go attempt to retrieve the paint brush from the body of the thief so he could paint us an exit. I’d have to fight the trolls, of course, and Rythe was no fighter and he could tell I was. Armed with a summoned flame spirit and my own fire spells, traditionally quite handy against real world trolls, I venture through the strange painted world. 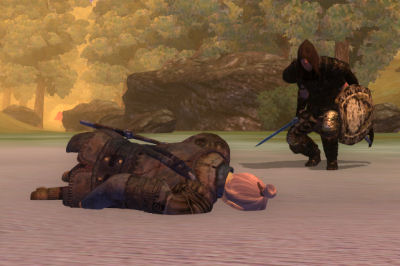 “If there were a looting corpses skill I’d have maxed it by now.”

I fought many a difficult battle against these painted trolls until I finally found the thief’s body and the enchanted paintbrush. As promised, Rythe was able to paint us an exit back to his study. After asking me not to reveal the secret of his talent, to which I agreed since the concerns of artists mean relatively little to me, he paid me for my trouble with a magical item of some worth. Another job well done and news of Rythe’s mysterious return spread quickly throughout the city. 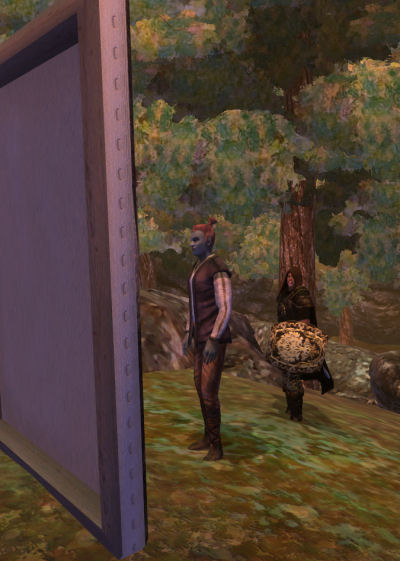 My next task in Cheydinhal was much more grounded in the realities of city life, fortunately. I began to note the abundance of guardsman in the city and soon came across a high ranking soldier who seemed to enjoy flaunting his authority as I personally witnessed him threaten several citizens for merely being in his path. When I mentioned this curious guardsman to some I was quickly referred to a local Dunmer woman who could tell me much more about him. 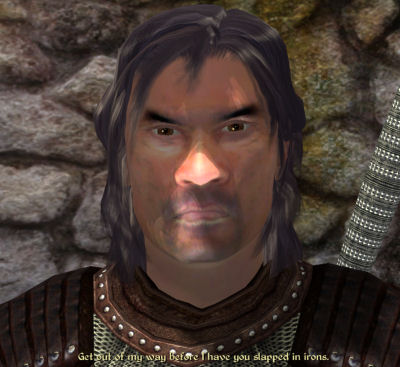 I visited Llevana Nedaren who was an outspoken critic of the city guard, accusing them, particularly of their captain, Ulrich Leland, of corruption. Apparently his preferred method of extortion was that of charging exuberant fines for practically any offense, even those that never happened. Llevana’s only real idea for a course of action was to speak to Ulrich’s second in command, Garrus Darelliun, who was apparently already suspicious of Ulrich and a circle of his men. 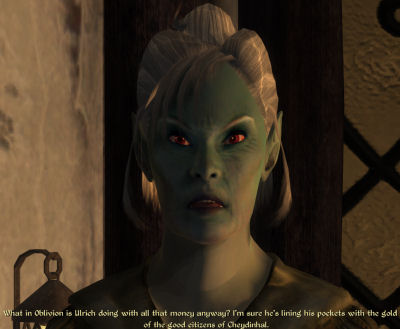 “What? Do they not have cops in Morrowind or something?”

I went to speak to Garrus in Cheydinhal Castle. Garrus struck me as a very by the book man – one who both rigidly followed and enforced the rules and morals of his station. He seemed to be honest and above corruption himself. He was indeed interested in catching Ulrich but had little solid proof of his crimes. He told me if that if I could investigate more on my own perhaps he could do something about the issue. One thing he had suggested was to speak with a man named Aldos Othran who could possibly act as a witness.

Aldos was apparently a local man who turned into a drunkard after losing his wife in a bandit attack and soon turned to binge drinking to ease his depression. He was fined for his drunkenness several times despite rarely being warranted according to witnesses, and the fines were so extreme Aldos eventually had his home confiscated by the guard.. 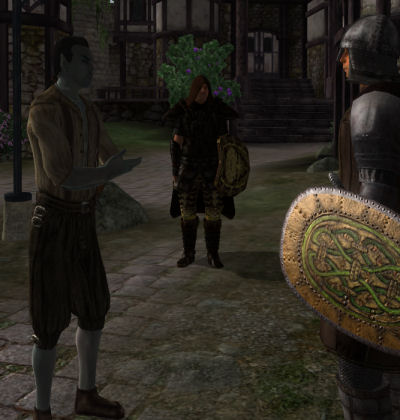 I found Aldos living in a small camp near the river that cuts down the middle of Cheydinhal but he was little help. The few questions I was able to ask him sent him into a drunken rage as he quickly sought to stand up for himself against the guard that had been such a source of injustice to him. He went to his former home and challenged the guard posted there and eventually directly attacked the guard who wasted little time responding with deadly force. I was quickly running out of options. 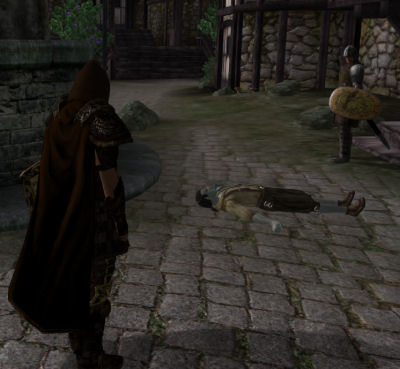 Garrus had suggested one more possibility: perhaps I could search Ulrich’s private quarters in the barracks for evidence. He, himself, had noted extravagant furnishings and the like in the captain’s quarters and suspected that some sort of undeniable proof was probably hidden there as well. Garrus couldn’t provide me with the details I’d need to do this easily but his idea was perhaps enough to give me the ammo to seal the deal. 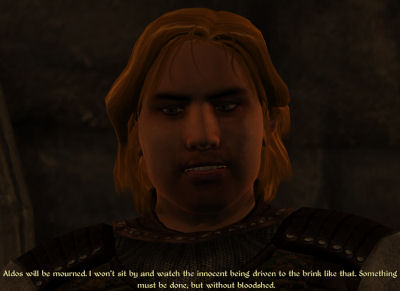 “Without bloodshed? How am I supposed to… what am I… what the?”

I stood outside of the barracks with a view of Ulrich’s door. While it was difficult to be entirely inconspicuous in such a place other than a few strange looks from guards nothing became of it. Once the main dining hall had cleared out during a change of the castle guard and I saw Ulrich himself leave I snuck into his quarters. It didn’t take me long to find the proof I needed – a letter describing a huge some of money and goods being sent to Ulrich’s relatives outside of the city. Now it was clear why the guard had been handing out massive fines with such frequently. I snuck out of Ulrich’s quarters as quietly as I snuck in and reported to Garrus with the letter. Garrus was quite happy with my findings and ran off to speak to the Count of Cheldinhal himself, instructing me to meet him at the Cheydinhal Bridge Inn in a couple of hours. 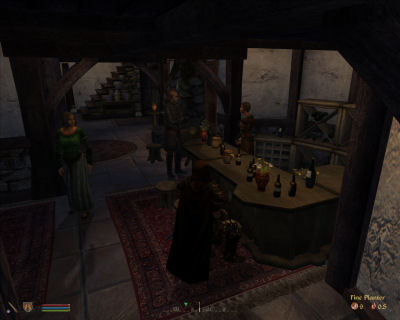 “Working on my seventh drink waiting on Garrus to show up.”

I sat in the inn drinking at the bar, hoping that the results of this task wouldn’t get me more trouble than reward and soon enough Garrus appeared. He quietly thanked me for my work and told me that the Count had Ulrich stripped of his rank and sent to the castle dungeons. Garrus himself had been promoted to be the new captain of the guard and the Count had instructed him to give me a handsome sum of gold for my assistance in “helping the people of Cheydinhal” in this matter.

Ahh, another task that worked out even better than expected! And my name was once again on the lips of another city’s Count. While I still didn’t know if this were a good thing or not, fearing that my past might eventually come back to haunt me, it would at least aid me more and more with getting future jobs.