Well, I finally completed The Ballad of Gay Tony last weekend. I can’t say I’m quite as positive about it as I was about my The Lost and Damned playthrough though. I don’t know precisely what my main issue was. Perhaps I’m just experiencing some general GTA 4 burnout? Maybe this playthrough was a bit too soon after TLaD? I’m not entirely sure. While I’ll dish out some positives later let me continue this train of thought and bring up some of my specific negative issues first:

While the missions were generally more “over the top” and varied than those in the previous two installments of GTA 4, the disparity wasn’t quite as large as I was under the impression it might be after hearing so many other people laud the game for them. It still felt very much like Grand Theft Auto IV territory the entire time. The only real new thing was the parachuting/base jumping mechanic which would have been right at home in San Andreas or Saints Row. 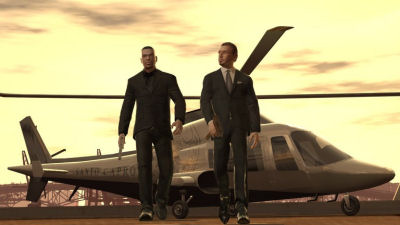 Next, the characters weren’t quite as enjoyable to me as those in the previous two titles. Gay Tony himself wasn’t the easiest character to fall in love with thanks to his drug problems and the often stupid, reckless decisions he makes that drive the story. While the lead character, Luis Lopez, seemed quite interesting at first, I felt like his character actually devolved as the game came to an end. I went from intrigued about his history with prison, his relationship with his family, particularly his father, and of course his friendship with Gay Tony, to completely bored of him and his frequent comments about how he’s “a total psychopath, bro!” and “likes killing people for money, bro!” As a lot of people took issue with Niko’s various anti-social crimes and violent acts seeming to be at odds with his character in the main campaign of GTA 4, I found there to be something a bit disingenuous about the pairing of Luis’s character as it is presented to us with his apparent fondness for murder.

I still have some gripes about the checkpoint system. In my original rambling post about GTA 4 I had a few complaints about the system but only specifically touched on the number and placement of checkpoints being an issue. In my playthrough of TBoGT, however, I was completely annoyed by an entirely different aspect of the system: When I die during a mission (which is typically why I fail missions) I hate, absolutely HATE, having to wait to load up at the hospital, wait to get and reply to my “retry?” text message, and wait yet again to load back up at the mission checkpoint. I realize that Rockstar probably does it this way to give the player more options before retrying and ultimately help instill a further sense of persistence in the GTA 4 gameworld, but I’d so rather prefer a simple “retry?” prompt to pop up on the screen the second I fail a mission. Honestly, I can normally really respect the persistent world aspect to these kinds of game design decisions but in this case I feel like the fun factor should have weighed a bit heavier into the equation. The funny thing is that I didn’t even fail that many times in TBoGT, certainly not as much as I did in GTA 4 proper, so I’m not quite sure why it annoyed me so much this time. 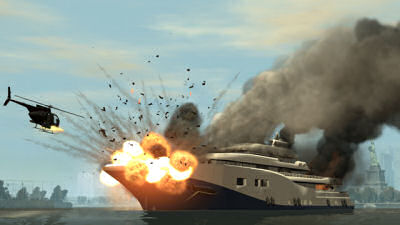 “This is for all of those food poisoning victims!”

Finally, after the much more streamlined narrative of The Lost and Damned, The Ballad of Gay Tony’s story didn’t feel quite as fetching nor as well told. There’s really no need to go into specifics about this point, it’s just my general take-away after playing both DLCs fairly close together.

Anyway, enough bitching! Is it good? Yes, it is good. I can safely say that if you’re a GTA fan and you enjoyed GTA 4 you should probably go out of your way to own both The Lost and Damned and The Ballad of Gay Tony. In fact, save yourself some hard drive space and buy the Episodes from Liberty City disk. Plus you get to rock out to Vice City FM and the awesome RamJam FM.

Both times now when I’ve come back to Liberty City I’ve been blown away by what an amazing job Rockstar did on the city itself. Sure it doesn’t always look amazing (some of the textures, particularly) but the amount of detail is astounding! I always felt that much of that detail was squandered since there are so many locations you don’t really spend any time in or only see in a blur as you fly down the highway. Still, occasionally I end up on foot in a strange new place thinking “wow, this place is pretty neat for somewhere you never go in any missions or anything.” To that end I’m sure the guys who did the bulk of the development work on the city were quite happy to see it brought back in The Lost and Damned and again in The Ballad of Gay Tony. 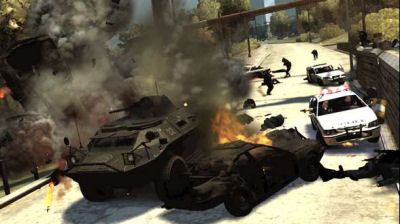 “Yes, there is finally a tank. Upgrade!”

I also still think the character and story crossovers are totally genius. Niko, Johnny, and Luis all influence each others stories, sometimes directly and sometimes more subtly, but it is there and it is often presented in such a way that you have to wonder if Rockstar didn’t have these different stories, and maybe others we’ll never get to experience, penned down from the get go. Again, totally brilliant!

Well, I’ve already written a lot more on this than I had planned too. Again, if you’re a big GTA 4 then you need this. I personally think The Lost and Damned was a better, more cohesive game but TBoGT is well worth your time as well. I have to wonder if we’ll see more, non Xbox 360 exclusive episodes in the future. I wouldn’t doubt if they’ve considered it but I’m sure all the guys at Rockstar are probably ready to move on by now.

As usual my Xbox 360 screenshots were swiped from far more reputable sources.