I haven’t updated in a while but I’m still playing through The Ballad of Gay Tony on my 360 and plan on another Oblivion session real soon.

Christmas and New Years have come and gone (happy holidays!) and, naturally, I’ve acquired some new stuff. First and foremost my I got me a generous gift certificate which I more or less had to spend on video games. I’ve already used it to grab Assassin’s Creed 2 and Modern Warfare 2 for the 360. Assassin’s Creed 2 is probably the one game I’m most anticipating playing right now and I can’t wait to hop into Modern Warfare 2’s multiplayer. I was planning on grabbing Borderlands as well as I thought it would be fun to play co-op but they were sold out of it everywhere I went for some peculiar reason. I’ll either try to be patient or grab Arkham Asylum instead. I win either way, right?

I also had a friend gift me Trine on Steam, a game that I’ve had my eye on for quite some time now. I was hoping it would eventually make it to Xbox Live Arcade but since that doesn’t look like that is going to happen I’m stoked to play it.

I received a points card for Xbox Live which I’ve used to buy two games that were on sale at the time – The Secret of Money Island: Special Edition and Shadow Complex. Both excellent games and since I plan on reviewing Monkey Island soon owning the SE will be quite useful as well as entertaining. I’ve still got some points left to spend but I’m not sure what I’ll spend them on yet. There are tons of Arcade games I want to play but relatively very few that I’ve actually purchased.

Speaking of Xbox Live Arcade titles I’m finally at the point where I’m seriously considering upgrading my 360’s hard drive. At this stage my Premium’s drive is totally undersized for the large collection of Rock Band tracks I have combined with some of the bigger Arcade games and expansion packs and patches I have. It is getting to the point where I almost don’t have a choice in the matter – having to delete content every time I want to download something new is a chore and in some cases entirely unreasonable. My only hang up is that as a long time PC guy the price of the 60 or 120 gigabyte drives strikes me as totally ludicrous. 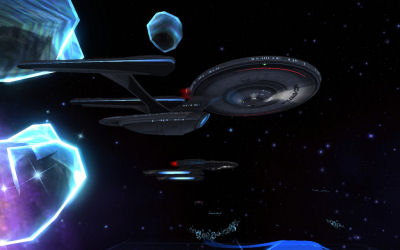 Finally, on an entirely unrelated note I am amazingly hyped for yet another MMORPG: Star Trek Online. Ugh, I’m so sure this game is going to bomb (at least to some degree, although with World of Warcraft out there that is true for every MMO) but the previews and beta leaks look great so I just had to drop the dime on the preorder.

I’ve always been a little bit of a Trekkie thanks mostly to my brother, who is a much bigger one than I and raised me on all of the movies and series up through Voyager. I’m currently experiencing a major reinvigoration of my Star Trek fanaticism not unlike what so many others I know went through as a result of the 2009 reboot movie. I’m pining to see the old movies again and I’d even love to re-watch The Next Generation, Deep Space Nine, and Voyager despite that being a lot more cost prohibitive to do.

Anyway, I’ve always thought the idea of a Star Trek MMO was a brilliant one and even when the game was having massive troubles under a different developer and the naysayers were out in full force I was quietly looking forward to seeing how the game turned out. The idea of being able to create and customize my captain, my crew, and my ship and go exploring where no man has gone before is quite appealing. At the very least you’ll see me write a lot more about it here in the next month or so when I make it into the “open” beta (what’s up with all of these closed open betas lately, anyway?) and finally the retail launch.