The Petty and The Pious

As soon as I arrived at Leyawiin’s city gates I was hailed by a guardsman. He welcomed me to the city and, after quickly scanning my attire, inquired about my availability to help the city guard with a small task. He told me of a local Skooma dealer who had setup shop in a house in Greyland to the south that the city authorities wanted dealt with. 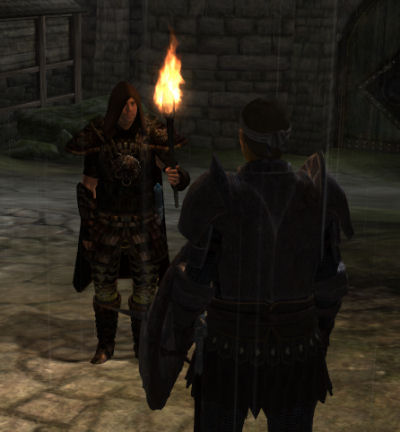 When I arrived at the house I could see the shadows of two men cast against the ground from the torchlight within. I was able to creek the front door open without either of them noticing thanks in large part to the noise of the heavy rain fall outside. I crept into the house and took a quick look at my adversaries. Both men were well armed and seemed to be somewhat tense, in mid discussion about business no doubt. 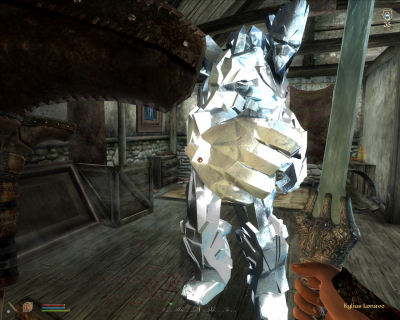 I summoned a frost atronach in the middle of the room, immediately catching the attention of both men who quickly drew their swords in panic. I then drew my own blade and rushed at them from behind as they attempted to stand with the atronach. After finishing off the first gang member I focused my attention on the second. Alas, the frost elemental was too much for the drug trafficker to handle and as I turned to face him the atronach sent the poor bastard flying through the air, narrowly missing me.

I searched the bodies and the rest of the building and gathered a few identifying objects to bring to the Leyawiin Guard. I was greeted with a fair bounty in gold for my services. My visit to the city of Leyawiin was starting off quite favorably.

Later that day I wandered around Leyawiin learning the lay of the city and doing a bit of shopping. While looking through the spell library at the Mage’s Guild I was approached by a Khajiit mage named S’drassa who wanted to talk to me discretely about some personal side work. 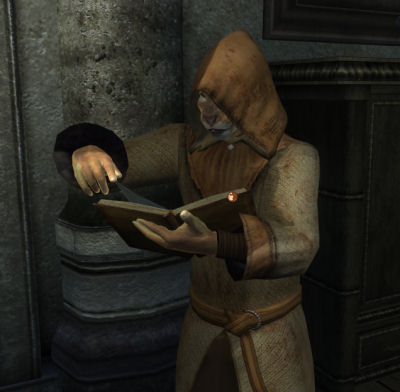 “These Mages Guild guys sure seem to have cushy jobs.”

It seemed that S’drassa was a bit of a collector of rare and precious crystals and stones and wanted my help in tracking down an extremely rare, magical crystal known as Garridan’s Tears. He suggested I ask around at other Mage’s Guild locations and, in particular, the Arcane University in the capital city. Normally I don’t agree to such lengthy quests that involve so much travel but S’drassa’s story sounded interesting and I was sure from his dress that he had the money to pay me handsomely.

After traveling north to the Imperial City I spoke to a few of the staff of the Arcane University and was quickly directly to Julienne Fanis. Julienne spoke a little about the legend of Garridan’s Tears but soon directed me to a book that told the tale. I purchased a room in an inn on that side of the city and read the book by candle light well into the night.

The story of Garridan’s Tears was a fascinating one indeed. The book told of a good Knight who lorded over a small farming community. When a vicious drought struck his lands his people sought his aid. Helpless to aid them himself he paid the best sages in the land to seek a solution. Eventually, as the situation seemed the most bleak and desperate he was approached by a sage who told him of the legend of the Everflow Ewer – a magical vessel which never ran out of water. Garridan believed that this was the answer to his people’s problems and set out on a noble quest to retrieve the artifact.

Following the sage’s advice Garridan breached an ancient cave and then a magically sealed door that lead to a small glade. Finally, inside the glade he discovered an altar on which sat the Ewer, just as the story told. All was not well, however, as when Garridan grasped the artifact the ground rumbled and an immensely powerful ice golem or elemental of some sort appeared and began attacking the knight. Garridan defended himself bravely but the guardian of the glade was too much for him.

The tale goes that as it was about to land it’s final blow Garridan blocked it with the Ewer itself, splitting it and causing a massive explosion of ice, freezing the surrounding areas and incasing both Garridan and the golem in a block of solid crystal. Tears erupted from Garridan’s eyes as he realized that he had failed his people. The few small crystals that were ejected from the grasp of the icy tomb are what are known as Garridan’s Tears today.

I traveled back to S’drassa to tell him of what I had learned as well as to see if he could prepare me to enter the frigid area where this epic story had come to a close. The narrator of the story claimed to be there when these events transpired and, according to his description, the entire area around the altar was now cursed by a deadly frost. Luckily S’drassa had just the perfect solution in some powerful potions and I set out on my journey to the cavern rumored to be the one in the tale: Frostfire Cave.

“At the entrance of Frostfire Cave.”

As I entered Frostfire Cave I found it to be strangely abandoned. Most of the caverns, ruins, and other interesting sites throughout the Empire had some obvious signs of visits from treasure hunters, bandits, or monsters, even if they were remotely located and well hidden as with this location. When I entered the cavern, however, I was greeted with an almost choking eruption of silt from the rocky floor. I navigated the rocky passages slowly and deliberately through dust clouded torchlight. 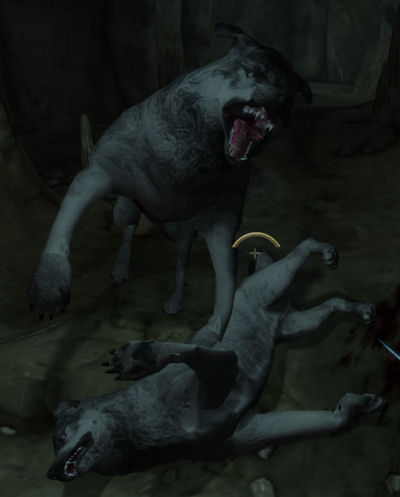 The only creatures that inhabited the cave were a large pack of artic wolves. Oddly enough many of the wolves in the cave seemed to be either extremely agitated or slightly distracted. I suspected that this was a side effect from the powerful magical seal that protected the entrance to the glade, which I soon discovered in a large room at the end of the cave system. I opened the door in the manner described in the book with little difficulty. 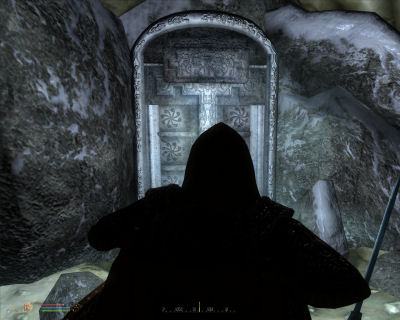 The strange glade was, at first, beautiful and lush. A peaceful place that I could easily have imagined once served as a resting place for a powerful magician or even a great ruler in times long past. Still, one had to travel only a few paces over a small foothill to see the frost scorched area where my objective waited.

I crept slowly towards the frost and ice covered area attempting not to alert whatever might still occupy the area. The narrator of the tale in the book didn’t lie – the closer I got the colder I became until it became completely unbearable, practically burning my skin. I took one of the potions S’drassa provided me with and continued on. 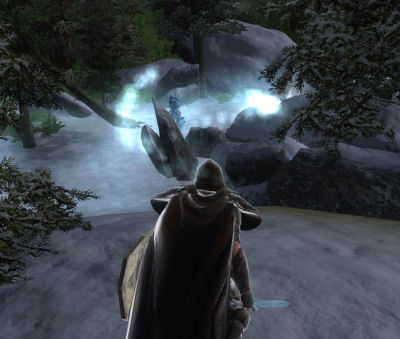 Luckily the only guardian I saw protecting the area was a single frost atronach or golem of some sort. It definitely wasn’t the intimidating one from the tale, as I could see his towering silhouette against the translucent edges of the large block of ice set dead center of the frozen area. Still yet undetected I positioned myself behind a large boulder and soon let lose with a barrage of fireballs into the creature. It was mighty indeed, and I quickly found myself locked in melee with it. Still, between my sword and my mastery of fire based magic it posed little real threat to me. 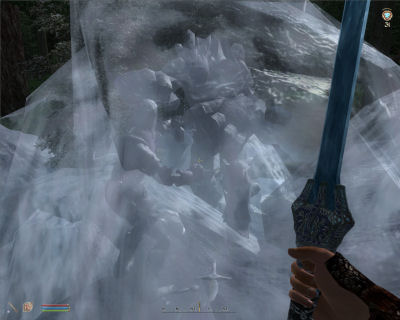 Once the sole protector the glade fell I began exploring the frozen patch of earth. Just as the legend described there stood Garridan and the great ice creature, locked in battle and entombed for all eternity in icy crystal. Garridan clearly held the remains of the Ewer and soon I found my first crystal of Garridan’s Tears nearby. I quickly realized that my supply of frost protection potions was running dangerously low and began more purposefully searching for crystals. Moments later I was sure I had gathered that I could gather without myself becoming part of the usual scenery of Frostfire Glade and made my way through the doorway back into the caves. 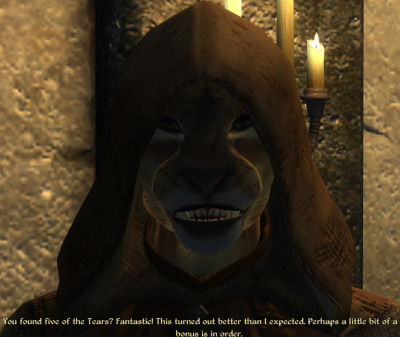 “If the cat dudes are happy I’m happy.”

S’drassa could barely contain himself when I arrived with not one, but five of the legendary crystals in hand. The mage pulled out a small satin sack of coin and threw it on his workbench and then reached around him and pulled out a second. It was a handsome reward of several thousand gold pieces – the most I had yet earned from a single payment and it was all earned relatively easily.