Damn, it seems like it has been an eternity since my last update. I guess it has been almost a month already. I guess time flies when you’re not having much fun too.

First and foremost after finishing up with The Ballad of Gay Tony I started playing Call of Duty: Modern Warfare 2 on my 360. I wanted to go ahead and start playing it right away to capitalize on the massive buzz surrounding its much lauded online multiplayer. 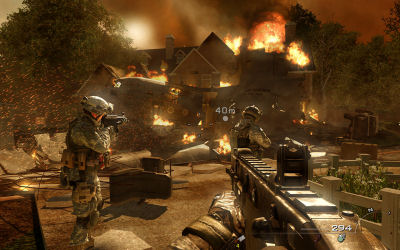 “There goes the neighborhood…”

I played my share of Call of Duty 4’s multiplayer and liked it a lot. Modern Warfare 2 is more of the same, only now cranked up to 11. Of course adding more rewards, perks, unlocks, challenges, etc. does tend to change the game quite a bit despite the similarities and I’ve talked to a fair amount of players who prefer COD4’s less insane (and possibly more balanced) multiplayer to that of MW2. Still, MW2’s increased focus on rewards succeeds in achieving an almost MMO level of addictiveness that is hard not to appreciate. In fact I had a hard time convincing myself to play the single player while the multiplayer was there, calling out my name. It isn’t usually the most tactical or cooperative of online military shooter experiences but it is definitely a hell of a lot of fun and has become my go to “kill a few minutes” online game on console.

I did eventually finish up the single player campaign on “hardened” difficulty and unfortunately enjoyed it about as much as I enjoyed Call of Duty 4’s. Most of the observations I made in my write up of COD4 a few months back remain true in its sequel. It’s a highly polished experience but I’m just not a big fan of the whole “get funneled around the map while running and gunning through hordes of enemies” thing and would rather be granted the freedom to use some actual tactics to complete my objectives. I suppose the checkpoints are a little better this time around. There have also been claims that there are now always a finite number of enemies so you can never run into nigh impossible situations facing seemingly infinitely spawning enemies that you often could in previous COD games. While this may be true it is honestly hard to tell as the unpleasant, often controller-smashingly frustrating “meat grinder” sections of old are still alive and well here. If you don’t care about the additional achievement and this frustration doesn’t sound like your idea of fun then do yourself a favor and play it on one of the easier modes and for god’s sake stay the hell away from “veteran” difficulty. 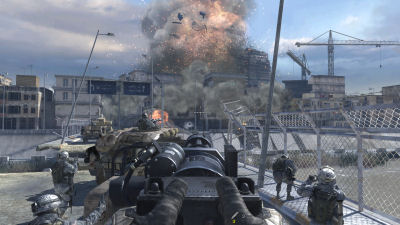 “Boom! One of the first of MW2’s innumerable huge explosions.”

While I’m bitching the plot of this one makes the COD4’s story look like a classic war documentary or something. It’s completely over the top and full of weird plot holes. Games Rader has a pretty funny article about it. I really wonder what happened over at Infinity Ward to make them go from writing stories more or less based on real life WWII events to the bizarre shit they’ve given us in the last two COD games. It doesn’t bother me that much – it’s more amusing than anything. These stories at least give us plenty of opportunity to shoot stuff which I suppose is their primary purpose.

As a complete aside I’ve always liked the way Infinity Ward handles first person cinematics and the perspective in general. The spacewalk scene and the flare popping scene on Whiskey Hotel’s roof both come to mind from MW2. There are others as well. They might not always look accurate but they always look cool and feel fairly immersive. It’s too bad they never actually do anything with it by venturing outside of the usual FPS gameplay conventions. 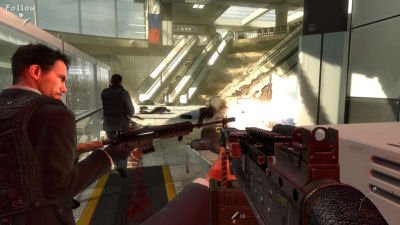 “This mission makes it disturbingly clear that someone at Infinity Ward hates waiting in line at the airport.”

Oh, before I move on let me reiterate a piece of advice that has been passed around a lot since it was first announced that Party Chat wouldn’t be supported in some of MW2’s game types. Its usefulness goes far beyond replacing Party chat though and finding it isn’t nearly as intuitive as it might sound.

How to mute everybody, all the time on Xbox Live: Hit your guide button. Scroll to the right to the “Settings” section. Select “Profile”, “Edit Profile”, and then select “Privacy Settings”. Select “Voice and Text” from the menu and change it to “Friends Only”.

This will make it so that you can ONLY hear people on your friends list in chat (and vice versa so you won’t be spamming public chat with weird half conversations.) It’ll also block that ever so pleasant after match hate mail you might get from time to time. It can allegedly have some odd effects in some games but for the most part muting all of the insufferable shitheads that plague Xbox Live is easily worth any negatives I can think up. I just wish it were a tad more accessible so that one could simply toggle it on and off for those moments when you might actually want to work together with your teammates and the like but I guess that might go against the spirit of everyone having voice on Xbox Live. *shrug* 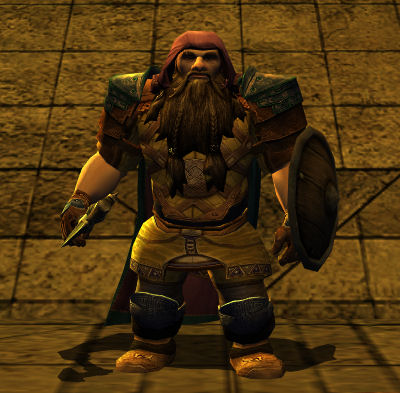 “Molgrun the Wary at level 7.”

On the PC front I really haven’t been playing much lately. I grabbed a copy of the collector’s edition of Lord of the Rings Online for dirt cheap and decided to check it out after not setting foot into (onto?) Middle Earth since beta. Other than the utterly ridiculous patching system I had to endure I had fun. I still contend that it is an excellent game but it definitely feels “slower” and a little bit less exciting than some of the other post-World of Warcraft MMOs out there. Actually, it very clearly feels to me like a good pre-WoW theme park style MMORPG that they’ve bolted on lots of WoW influenced features to, which I suppose is probably pretty accurate. That said like Turbine’s other current MMORPG offering, Dungeons & Dragons Online, I could easily see myself playing LOTRO if I had a regular, small group who I liked to run instances and the like with. I played my Dwarf Guardian for just 15 or so levels before I felt WoW itself calling me back.

It has been quite a while since I’ve really played WoW besides occasional romps with some low level characters some friends and I play but as I mentioned before I finally purchased the Wrath of the Lich King expansion recently and have now finally decided to start working my main character up to level 80. I’ve only been playing it very sporadically when the urge and/or boredom strikes and it has been working quite well for me so far. The new content is, for the time being, pretty fun (if not more of the same) and no matter how sick I get of it I always find it hard not to appreciate what Blizzard has done with WoW over the years. It still feels like the most complete, most polished, and best bang for your buck MMORPG out there. 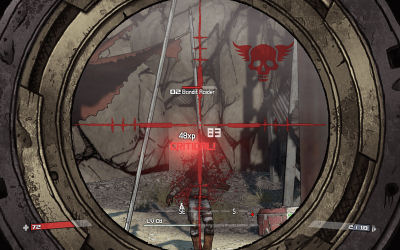 “Borderlands: not your kid’s cartoon violence.”

Speaking of MMORPGs Star Trek Online was a game that I was pretty hyped up for around this time last month but unfortunately due to waiting on some features and fixes I wanted patched in and the horrible stability of the game servers during the first few weeks after launch I really haven’t played much STO since it officially launched last month. I’m sure I’ll get back into it sooner or later but for the time being Cryptic kind of missed the boat on hooking me in.

Finally, back to the Xbox 360 I started playing Borderlands. I’d had my eye on Borderlands since first hearing about it but when it finally came out it just didn’t seem to equal the sum of its parts. Of course, next thing I knew peer reviews started rolling in and people loved it. When I heard how good co-op was in particular I knew I had to grab it to play through.

It is very much a traditional FPS combined with the quest, skill, and loot systems of an MMO. Actually, I’d probably equate the loot system with more loot centric games such as Diablo and its ilk. It sounds kind of disjointed and odd but it actually works well enough. The game definitely has some issues (which I’ll probably expand upon more in a later entry) but the combination of the random loot-a-thon treadmill and the furious combat is fun and very addictive. In fact I think I may need to cut this short and continue the hunt for more purples…

As usual my Xbox 360 screenshots were shamelessly swiped from elsewhere. The LOTRO one is mine though! 😉