I’ve been majorly slacking on my updates lately. Sorry readers! I’ll be trying to force myself to play more and more Oblivion this month so expect several more updates before May.

After the successful completion of my last quest I was preparing to continue on my journey, heading back up north to the Imperial City. I spent one more night sleeping in a semi-civilized manner, in an inn, before stopping by the city market in the morning to purchase some fruits and vegetables. While walking around the market I overheard several different people discussing a citizen called Rosentia Gallenus. Apparently she hadn’t come out of her house for days and there was a horrible stench and strange noises emanating from within as well. I decided to postpone my departure slightly and investigate.

Knocking on her front door I wasn’t sure what I’d find. Had she committed some kind of grizzly murder? Was she some sort of powerful necromancer, or had she possibly become undead herself? When she finally opened the door she looked worried and exhausted. Recognizing me as an adventurer a weight seemed to instantly lift from her shoulders and she invited me in.

“We wouldn’t want the neighbors to think you’re the wrong religion, now would we?”

Immediately upon entering her house I was surprised to find the room flanked by several scamps. Rosentia explained. After the death of her husband left her with a fair amount of free septims she began collecting rare, magical artifacts. Her most recent purchase was a staff of Daedric origin. While attempting to translate the runes on it she accidentally activated it, summoning the scamps. Apparently the scamps didn’t cause much in the way of mischief but they followed her everywhere, and even killing them wouldn’t cause them to go away – a new one just appeared in its place. Rosentia had tried getting rid of the scamps, and indeed the staff itself, but nothing worked. She needed help figuring out how to get rid of it. Unable to go herself without raising all kinds of questions about her new, little friends she asked me to talk to one of her friends at the Mage’s Guild. 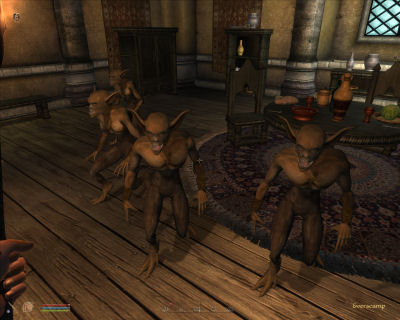 Alves Uvenim had already suspected what might be going on and conducted some of her own investigating. She believed that the staff was a creation of Sheogorath, the Daedric prince of madness, and that we might be able to get rid of it by leaving it at a shine to him. Fortunately Alves discovered that Rosentia could give me the staff as long as I would willingly accept it. Not only that, but there was a little known shrine to Sheogorath in a cave not far from the city. Problem solved! I visited Rosentia one last time to retrieve the staff and began my journey.

I soon left the city, legion of scamps in tow. Thankfully I wasn’t concerned about rumors of my own dabblings with the Daedra as I was routinely spotted traveling with much worse than mere scamps. The scamps were indeed annoying, however. Unlike summoned creatures they wouldn’t fight for me. In fact, if anything they preferred to stand in the way and hamper my efforts, cackling and snarling as if they were well aware of the twisted joke their Daedric master was playing. 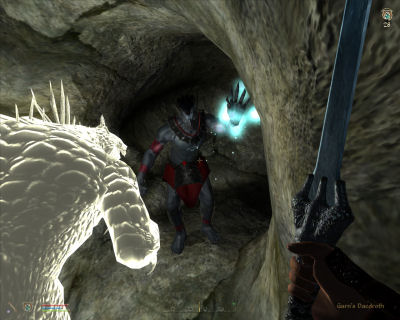 When I finally pushed open the long disused wooden door barring the dark pathway leading down into Darkfathom Cave I immediately heard the scurrying of more Daedric creatures. My attempts to quietly sneak into the cave were of course nullified by my own beastly entourage. Inside the cave I faced a large variety of exotic Daedric creatures, many of which I hadn’t laid my eyes on before. Thankfully few of them posed much of a threat and I soon found myself standing at an ancient, long disused shrine to Lord Sheogorath. 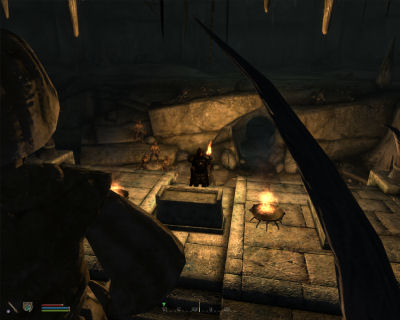 The shrine was impressive – probably once a central place of worship in Tamriel long ago. I approached it cautiously and laid down the staff upon an empty alter in front of a large statue of Sheogorath. The scamps scattered and the curse appeared to be lifted. Upon returning to Leyawiin Rosentia was relieved to hear of the news and for my trouble she offered me an less annoying artifact from her collection – a magic ring that seemed as if it would be useful indeed. Another job well done and thankfully another reward worth my trouble. I was hopeful that this might become a trend and I might be able to make my living as an adventurer.