The next day I spent most of my time hanging around in some of Bravil’s taverns. Unfortunately most of the taverns in the city were more of the inn variety thus most of the relatively few patrons were travelers rather than regular locals. Still, it was only a matter of time before I heard rumor of a woman who was claiming that her husband had been kidnapped. This, naturally, sounded worth investigating.

I found the woman, Ursanne Loche, chatting with several others outside of the city chapel. She was easy to spot as she wore the look a person who had done much grieving in days passed. After I introduced myself she told me that her husband Aleron had manged to get himself into a significant debt thanks to an out of control gambling habit and had been kidnapped by a loan shark named Kurdan. This sounded like absolutely none of my business but I figured it couldn’t hurt to at least go chat with this Kurdan character. 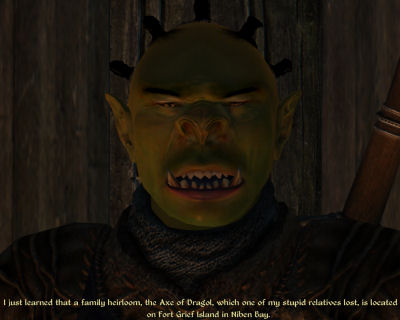 “Since you’re obviously incapable of getting it yourself I guess I’ll accept.”

After asking around a bit I located Kurdan hanging around at The Lonely Suitor Lodge. Kurdan was a large Orc who seemed suspiciously well armed for a loan shark. I was surprised to find him offer me a straight up trade without much discussion at all. Kurdan simply wanted me to travel to a nearby ruin and track down a lost family heirloom of his. While this sounded reasonable the whole setup seemed a bit too casual, and I remained suspicious of his intent even as I agreed – or perhaps that was why I agreed! Once I accepted Kurdan’s offer he seemed eager to have me leave and said he had even provided me a small boat to take me to the ruins. After agreeing he seemed oddly rude and forceful, even for an Orc, insisting that I leave immediately and not dilly-dally. My hand never left my sword’s pommel as I stepped into the boat and made my way down the city canals. 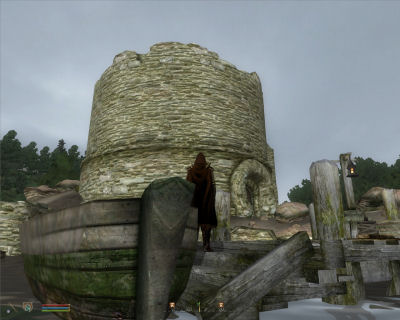 I reached the ruins of Fort Grief, just across the bay from Bravil. The ruins consisted of a large, destroyed tower poking out of a sandy beach. For being so remote the area looked well traveled and used, even having a dock to tie the boat off on to. The only entrance to the ruined tower I found was an archway blocked by a large metal portcullis. A small leaver raised the portcullis and I cautiously stepped inside.

The portcullis fell back down with a loud clanging noise as it slammed against the stone. While I wasn’t too surprised by this my attention quickly shifted to trying to locate a means to reopen it from the inside. Unfortunately I couldn’t locate one near the archway itself though my search was soon interrupted by the shouting of a man. As shouts of “Hello?” and “Is anyone there?” echoed through the ruins I made my way towards their origin. Much to my surprise I saw a Breton man who matched Ursanne’s description of Aleron perfectly. 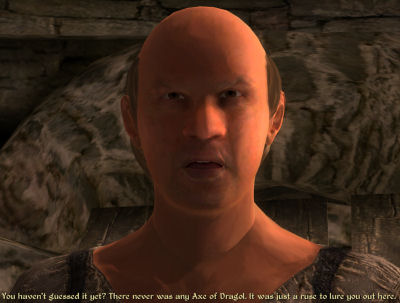 After introducing myself Aleron hurriedly told me that he had been lured here by Kurdan in a similar way as I had, and that we were now apparently unwilling participants in some kind of bizarre hunting game run by Kurdan. Unfortunately it seemed that our roles in the game were to serve as prey, and that the only way out was to go into the sub-levels of the ruins where the hunt took place and survive the hunters, one of which would have a key to the outside. I had heard tale of such “man hunts” while in prison though I never bargained I’d ever see one myself, never mind be the one being hunted in one. I told Aleron, who certainly didn’t look like the fighting type, to hide himself nearby on the outside while I searched down below.

Thankfully I still had my equipment and my magic so I didn’t feel like I was at a large disadvantage in this game. I lit a torch, drew my sword, and walked down a stairwell into the enclosed portion of the ruin. The inside seemed to be relatively well kept, with obvious attempts at recent repairs and modifications made to much of the structure. Near the entrance was a locked room containing a leaver – likely the key to our freedom. I attempted to pick the lock for several minutes only to discover that it was an uncommon sort of lock that my picks were not suited to working with and continued on my way. 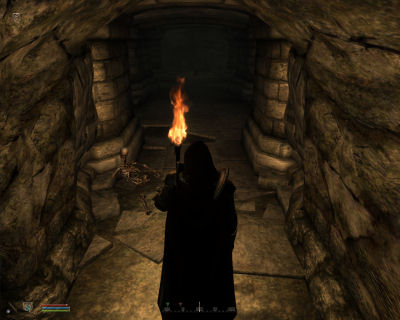 “Ok, I’m reporting this to the Better Business Bureau.”

The walls were scarred with signs of battle, pocked with arrow hits, and there was even the occasional humanoid skeleton to be seen – obviously Aleron and I were not Kurdan’s first victims. My train of thought was broken by a battle cry as a man wielding a massive poleaxe rushed towards me. I sidestepped his attack and slashed across his belly as I did so, landing a lucky hit on a weak area of his armor. As I turned to continue the fight he was already dying, clutching his wound. 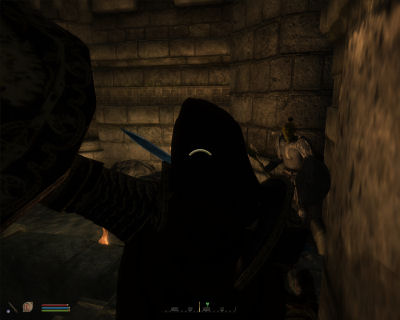 As I continued on I came across many traps – some of which were probably part of the original structure while others, such as crude pit traps, were obviously recent creations meant to spice up the hunt. Some of these traps were hidden quite well as the second hunter who attempted to ambush me discovered. A large boulder smashed into the hunter, sending him flying off of a ledge and to his death before I was even aware of his approach. Finally I reached the end of the accessible part of the ruin, and the last hunter – an Orc who fiercely charged me as I entered the chamber. I struggled to keep the Orc at bay with fireballs while continuously moving away from him before we finally clashed and I finished him off. I claimed my key from his corpse and started to backtrack. 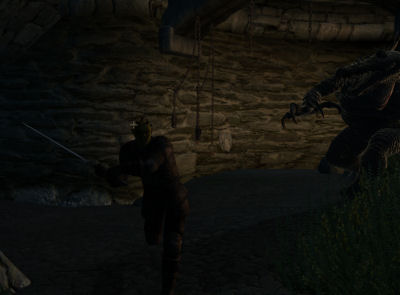 “Look out behind you!”

I was quite surprised to find that the key that I had found on the Orc hunter didn’t fit the locked door to the gate room either but I had little time to contemplate the situation as I heard screams coming from the outside. I rushed back up the steps to find Kurdan himself standing over Aleron’s body. He turned to me and smiled before lifting his sword and approaching me. I didn’t hesitate to engage him. Kurdan was a strong warrior but I quickly found that his brutal, overbearing attacks were of little match for my sword skill and I finished him as a brief but violent sword fight. Upon searching his body I found the actual key to the gate room – Kurdan obviously never intended to let us leave the hunt alive regardless of the outcome. 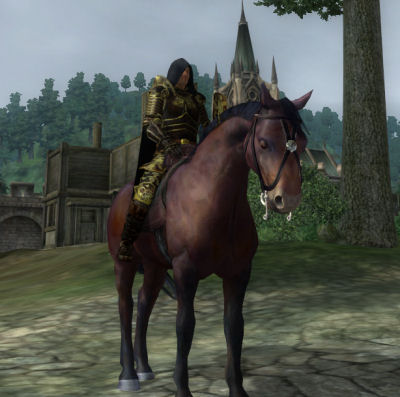 I loaded Aleron’s body onto one of the small boats still tied off near the ruins and rowed back into Bravil. I sent for Ursanne immediately upon seeing the first city guard and by the time I had tied off a small group had gathered around at the docks. I told her that Kurdan had double crossed us and that her husband had been brave despite the circumstances. I left the somber scene quickly and headed off to the stables to purchase a steed. This job hadn’t gone at all as I had hoped and I wasn’t very pleased at failing to bring Aleron back alive. It was time to continue on to the Imperial City where I was hopeful that better fortune awaited me.