Though the Imperial City is within sight I have to continue my journey around to one of the entrances in the north. Night falls quickly and despite the frequent patrols of the roads this area is teaming with wildlife, Goblins, and other undesirables that I’d rather not let catch me off guard so I decide to make a stop at the Roxy Inn. When I inquire about a room the Nord lady behind the bar, no doubt noticing my garb, says she’ll make me a deal. She has a desperate look in her eye which draws my full attention – I hear her out. She tells me that a Necromancer named Raelynn the Gravefinder has moved into a cave nearby and has been causing a lot of trouble, sometimes scaring away potential customers. She says that if I can clear out the rogue mage she will give me a room for free whenever I desire. While I probably won’t need to stay this close to the Imperial City very often an adventure is an adventure. 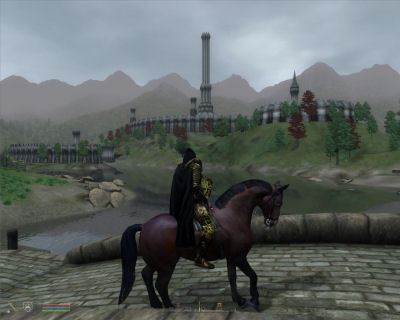 Since I’ll likely be in the dark the entire time anyway I decide to go ahead and visit the necromancer’s cave now. She almost certainly won’t be expecting unwelcome visitors of the adventurer variety at this hour and, if I’m lucky, she’ll even be asleep. I’ve heard and, to some extent, seen myself by now that rogue mages and other outlaws often prefer to live in groups so the possibly that Raelynn isn’t alone doesn’t escape me. I carefully creep up to the cave, putting my torch out 25 feet or so before the cave’s entrance as to not cast any light that might give my approach away, and slip into the entrance. 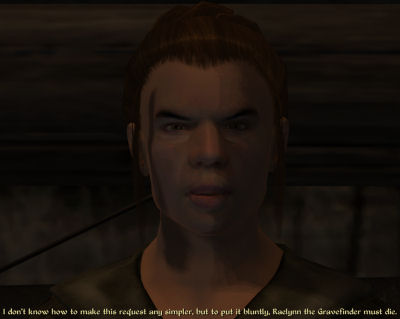 The cave is much larger and more open than I would have suspected – now I’m even more concerned that this might be some sort of a necromancer coven’s base of operations. Soon, despite my attempts to remain stealth, my presence is detected and I hear the telltale signs of a summon spell being cast. A reanimated corpse comes charging at me. As I hack at the decomposed body mindlessly swinging at me I catch a glimpse of the necromancer behind it – and it isn’t a woman. After defeating the animation I charge the necromancer and despite his attempts to flee I finish him off. Hmm. 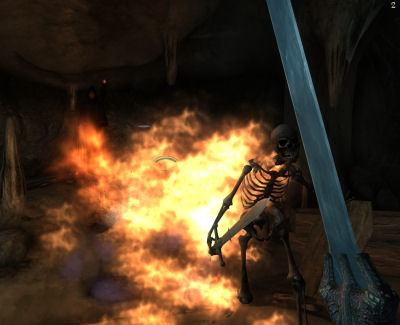 “Sure, stand there smugly behind your burning skeleton… thingy..”

The next coordinator leads to a double door way. As I prepare to quietly open it the doors both swing open with great force. I only narrowly avoid being bashed in the face by one of them. Two summoned skeletons rush me and I prepare for a tough fight. Obviously two separate necromancers are behind this attack as each animation is quite powerful. After downing the skeletons I rush the first necromancer I see. She screams at me, something to the effect that she knew they’d come for her eventually she won’t go easily. Indeed she doesn’t – we trade spells until I am able to corner her and finish her with my blade. Raelynn the Gravefinder is dead yet I barely have time to take in the kill as the second necromancer attacks. Wounded from my battle with Raelynn this fight is quite a struggle. This necromancer seems to be much more powerful and I only narrowly survive his constant summons and lightning attacks. 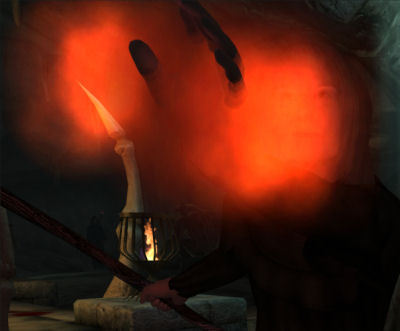 “Raelynn the Gravefinder curses you!”

Although my job here is done I believe I’ll explore this cave system just a bit more, after all, if any necromancers remain then the Roxy Inn’s troubles will too. The next chamber I enter contains three necromancers, though thankfully not nearly as powerful as the last one. I summon a Daedroth who quickly dispatches one of the spell casters before he can even summon an animation. The Daedroth and I quickly dispatch the second as well, though the third proves more elusive and begins running down a far corridor away from me while at the same time hurling all manner of spells and curses at me. The necromancer and I trade magical blows evenly for what seems like minutes. While she did a good job of keeping me at bay I eventually gain enough ground to charge her and land a fatal blow, cleaving one of her arms cleanly from her body and sending her staff quietly rolling down the passage. 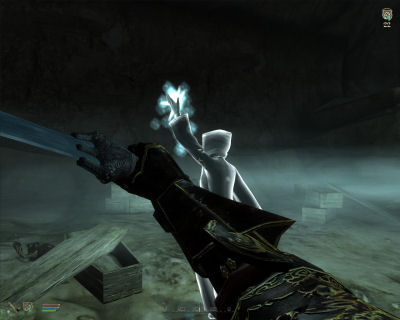 I loot the bodies of their possessions. There isn’t not much in the way of treasure but rare and valuable magic supplies are numerous. I move on to the final large room in the cave and am greeted by another necromancer and his summon and I can see another, more powerful necromancer further in the room who also begins to send his animations at me. I land a fireball squarely on the first necromancer and slide my blade through his side for good measure as his screams, burning to death, then kick him off of my sword and charge, shield raised high, to the necromancer lord. The lord summons additional animations and animates some of the nearby bodies. Soon a wraith joins the battle as well. Obviously this necromancer knows he is the end of the line and is giving it all he has. Unfortunately for him so am I. 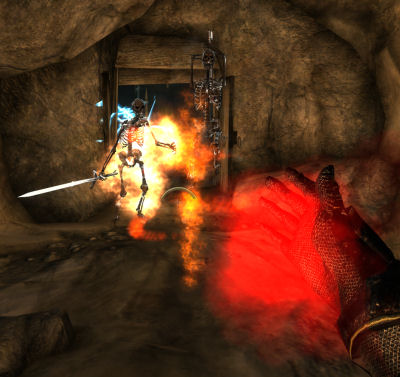 “I skillfully block the attacks of my opponents by employing a meat shield.”

As I summon another Daedroth to distract some of his summons I pepper him with fireballs and advance on him. As I hear the wraith’s agonizing yelp of defeat beside me I charge further at the necromancer, this time bashing him with my shield and following through with a swift sideways strike. Despite my crushing advance he is able to block my blow with his staff though it is cut cleanly in half, its pieces flying to either side behind him. This time I lunge my sword towards his belly and it hits its mark. While the necromancer is obviously mortally wounded his finger tips still crackle with lightning as if he is going to strike at me a final time with his dying breath. Taking no chances I draw my sword from his belly and with one powerful strike cleave off his head. The cave seems vacant once again.