I was minding my own outside of the Roxy Inn, packing up my horse and preparing to set out once again when I was approached by a stranger in a grey cloak. He introduced himself as a runner from the Court of Bruma and said that the Countess insisted on seeing me about work. The runner tossed me a small coin pouch and told me it was a stipend to help ease my consideration. Temporarily dumbfounded by this I had little time to ask questions before the runner again made his way back to the road and disappeared into the surrounding hills.

At first I was a bit puzzled by these events: Had my reputation grown enough that a Countess would send for me from afar? Had my reputation grown so much that people were starting to take note of my whereabouts even? Was this a trap? Should I be concerned? The 25 gold coins in the pouch sealed the deal – I had few enemies in Bruma so far, had certainly done a few things there and around there to gain reputation, and I still had little to go on regarding my suspicions of a forgotten past that I should be wary of catching up to me over. This was what I was after, and what my adventuring career had been building up to. I mounted my horse and began to ride towards Bruma. 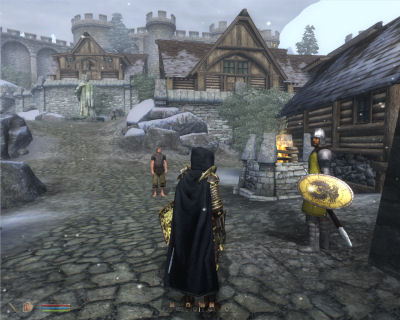 As I walked into Castle Bruma I was greeted by the court’s herald, Tolgan, who had been expecting me and escorted me to the Countess. Countess Narina Carvain seemed absolutely giddy with excitement upon my introduction. The Countess told me that she had been looking for an experienced adventurer for quite some time and began to lay out the entire scenario for me. Apparently the Countess was an avid collector of ancient Akaviri artifacts. Although I didn’t know of their origin, I could see signs of her being a collector by the various displays in her throne room. The Countess told me that she had been in search of a particular item, an amulet called the Draconian Madstone, that she had been able to track to a location known as Pale Pass. Pale Pass, however, was thought to be a legend and no one knew exactly where it was. Some of the Countess’s scouts were able to track down one of the landmarks mentioned in the journal of a Akaviri messanger that was part of her collection which lead her to believe that it might actually exist, however. This was where I came in – her scouts were unable to continue their search due to dangerous monsters and wildlife in the area. 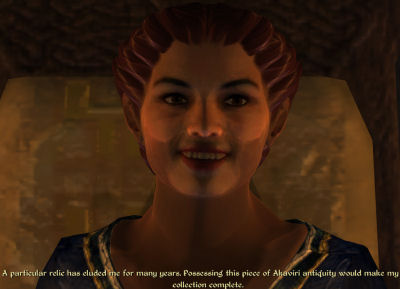 “See how happy I make her?”

This sounded like a simple enough task – she gave me a copy of a simple landmark map that was drawn in the journal as well as precise directions to one of these landmarks. She seemed quite certain that if I could find the other two land marks described in the journal I’d be able to locate the Pale Pass and hopefully find the Draconian Madstone. The beasts roaming these northern mountains weren’t much of a concern either – sure, they could be dangerous, but I’ve dealt with them before without a problem. 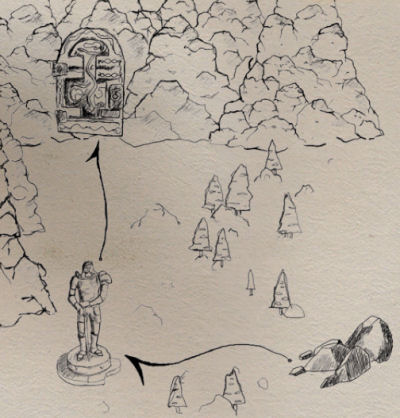 After a quick trip to a local supplier for some extra furs I saddled up and began to ride away from Bruma. It was a lonely ride up into even higher elevations than city sat at, with snow blowing at my face and poor visibility to watch for predators. As I set camp for the night I began to read some of the journal transcriptions the Countess had given to me. Assuming the accuracy of her scribes, the journal tells of a messenger who was being sent to the invading Akaviri army’s headquarters which was hidden in Pale Pass. The message was a simple one but not delivering it could have dire consequences – the fort would not be supplied as scheduled, and they would have to ration their supplies for longer to hold out. The messenger never made it, besieged by the elements, wolves, and what sounded like Ogres. 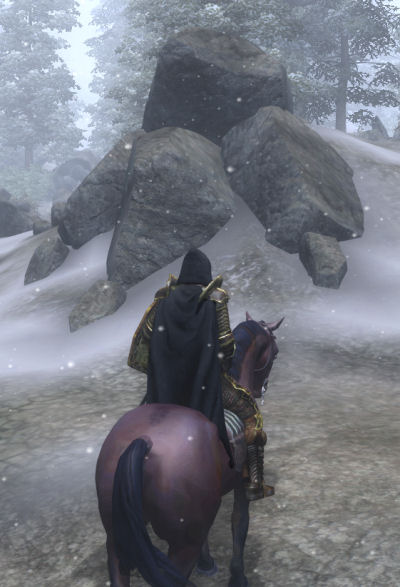 At day break I set off again and soon found the second of the landmarks – an huge and ancient Imperial statue of a knight. I thought it to be quite an odd location for such an elaborate piece of art but who knows what this place was in ancient times. As I admired it I heard my horse, left to graze nearby, in distress. As I dashed to it I discovered a hulking Ogre kneeing over its corpse. Nimbly out maneuvering the creature I slashed my sword deep into its shoulder and again across its midsection. Luckily I wasn’t carrying too much extra on my horse and I was, in theory, close to the final landmark and entry way into the Pale Pass.

Soon I found it – an ornate doorway carved into the very face of the mountains. As I opened the door it was quite clear that I was the first visitor here in a very, very long time. I carefully made my way through the dusty cave – it seemed to be mostly one long passage, though there were outcroppings containing chests and strongboxes and what seemed to be some caved in rooms and passageways leading off in different directions. Most of these chests seem to have been picked of their more precious items by thieves long ago despite the generous smattering of traps scattered throughout the cave system. In one of these outcroppings I discovered the remains of the very messenger whose journal had been so useful in finding this place. Although his skeleton had obviously been picked clean long ago, I did find a copy of the message he was supposed to be delivering. Feeling that this might be worth something to the Countess I pocketed it and continued on my way. 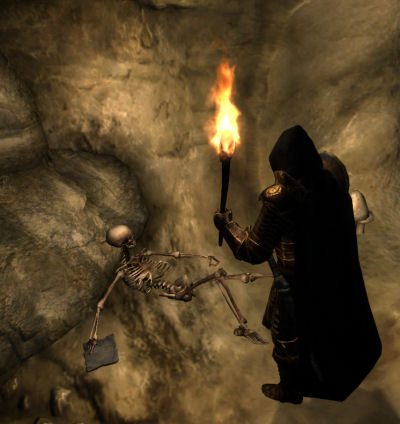 After hiking a good 20 minutes I emerged from a door on the other side into what was unmistakably Pale Pass – ancient ruins fill the basin whilst the wildlife, nearly undisturbed for years, thrived as best it could in the harsh climate. I said nearly because the creature at the top of the food chain in this forgotten place soon made itself known – Ogres. The entire area was simply teaming with Ogres and I had to continually check every corner for potential danger. Luckily Ogres are seldom known for their stealth or their cunning so I never gave them the chance to get the better of me. It didn’t take long for me to discover the fort – the ancient Akaviri headquarters. The upper levels of the complex appear to have been almost entirely decimated by a landslide but a quick search through the ruins soon revealed an intact passage into the lower levels of the building. 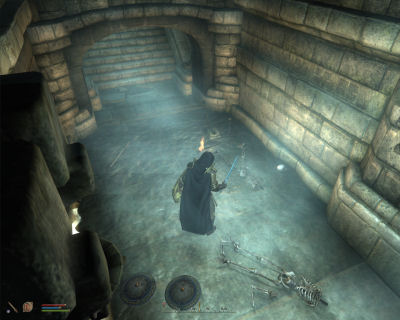 Below the ruins I found an surprisingly intact fort. There was little in the way of interesting treasures to be found but it may have been kept quite lean in times of war. I didn’t get to explore long before I encountered two things I’d be coming across quite a bit while down there – traps, and undead. Traps were simply everywhere in this place though many of them were too ancient to continue to function now. I theorized that the holdouts at the fort, knowing of their fate, barricaded themselves in. Perhaps they feared an impending attack? Such knowledge is likely forever lost. More mysterious to me, however, was the presence of undead Akaviri soldiers that frequently ambushed me as I moved through the complex series of passages and rooms. How did Akaviri became undead? Perhaps a curse or some sort of necromantic charm used on recruits. In any case this was not my idea of good adventuring – much danger with very little reward. Even the Akaviri armor and weapons which could be priceless to collectors such as the Countess, were so deteriorated as to be worthless. 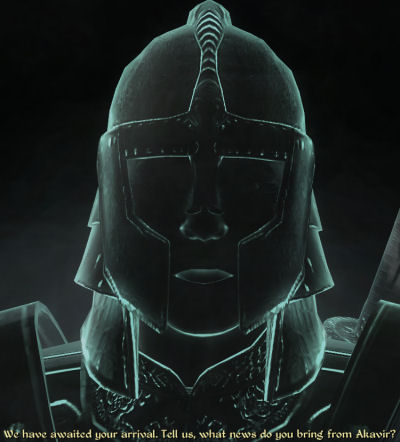 “Well, the weather hasn’t been so great…”

I continued to make my way through the dark and dusty underhalls of the fort carefully looking for traps and any sign of the Madstone. Not having much luck I eventually came to what appeared to be an officer’s quarters judging by the decor. My search was interrupted by another undead solider, although this one began to speak. It was the Akaviri Commander, and he seemed to be addressing me as the missing messenger. He demanded to know of what his orders were. Instinctively, rather than attempting to fight it I reached into my pocket and presented him with the copy of the message I had found in the cave. Seemingly content with whatever details lay within, the commander collapsed into an unanimated pile of bones and armor and I could hear echos of other undead soldiers doing likewise throughout the fort. While I was happy to be rid of the nuisance I was still no closer to finding the Madstone. Almost as soon as I had completed that thought, however, a large stone slab began to slide away – something had triggered it opening in the officer’s quarters, revealing a small treasure room. The treasure certainly wasn’t the great heaps of spoils of war that I had imagined, not too surprising given the less than successful end to the campaign, but at least the Draconian Madstone did seem to be amongst the items I recovered. I quickly filled my bags and began the long walk back out. 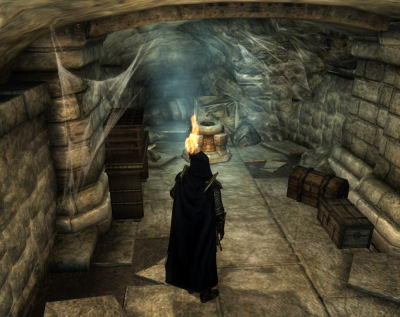 The walk back out of the fort, the pass, and finally the mountains, without a horse, was quite miserable, but before long I found myself back in Bruma. Countess Carvain couldn’t believe her eyes when I presented her with the amulet. She was so pleased with its condition that she gave me one of her other, lesser Akaviri artifacts, a magical ring, as a reward. Although the ring didn’t seem to be exceedingly useful to me it was likely worth quite a bit to one of the dealers in the Imperial City. Speaking of which, I had seen my share of these cold mountains for the time being and decided to set out for home, hoping my modest shack hadn’t yet been robbed of its riches in my absence. It could very well be filled with squatters by now…