Modryn sent me back to Anvil to speak with Azzan about an important contract. After the cold and wet journey southwest I was greeted at the guildhall’s entrance by Maglir, who I had previously been sent to investigate for defaulting on one of his jobs. Maglir was none to pleased to see me but managed to put forth at least a little effort in feigning indifference towards me. After bedding down in the guildhall for the night I went upstairs to speak with Azzan. Azzan informed me of reports that a gang of Bosmer thieves had been striking out against the local populace as of late. The gang’s base of operations was unknown but patterns seemed to suggest that they were based in or very close to the city. Azzan told me that since we didn’t know how many thieves there were I’d be working with another guild member – Maglir. As you might guess, I wasn’t thrilled with the idea and was eager to get this job taken care of immediately.

Maglir and I split up and canvased the city asking around for witnesses, victims, or anyone with any kind of clue as to where the gang might be based. Finally someone referred Maglir to Newheim the Portly – a large Nordish man who was incensed about having his flagon, a family heirloom, stolen from him by the same gang we were hunting. Newheim had heard that they had been hanging around in Hrota Cave off of the northern road out of Anvil. Although Maglir was less than interested, I told Newheim I’d keep an eye out for his flagon and we set off on our way. 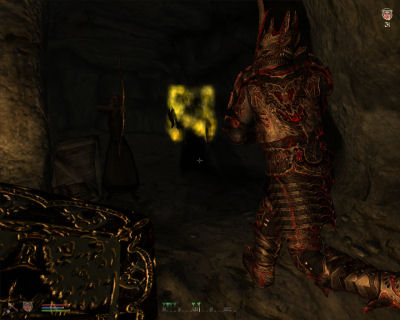 “My Dremora Lord bravely takes an elvish arrow in the face.”

As Maglir and I crept into the cave and drew our swords we heard whispers in the darkness ahead. We were able to sneak up on the first two thieves and dispatch them quietly though a third walked in upon us as we searched the bodies and screamed out as he peppered us with arrows. As Maglir dove for cover I summoned a Dremora and followed suit. Although none of his companions came to assist they were all too aware of our presence by that point so we tread less carefully while clearing out the rest of the cave. Despite his apparent lack of dedication to the guild Maglir performed admirably in Hrota Cave – he seemed to have absolutely no qualms about killing his own kin. We dispatched 8 thieves in total, cleared the place of its meager loot, leaving much of for the Anvil guard to sort with later, and returned to the city. 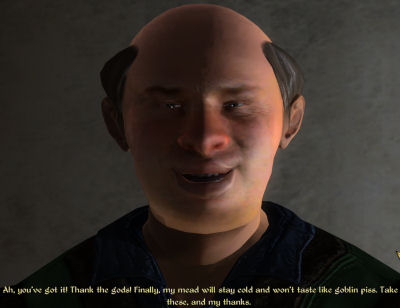 “Ughhh, is this what I’ve come to? Talking to ass ugly Nords about drinking piss?”

Azzan was pleased with our success. He offered me another contract that involved escorting a scholar named Elante of Alinor to an old Daedric shrine located at the bottom of Brittlerock Cave. Having to kill a variety of minor Daedra aside, this was another contract that I was able to complete with ease. Azzan took me aside and told me that Burz had a job he thought I could handle up in Cheydinhal. While I wasn’t thrilled about the lengthy ride back east I was happy for more action so quickly. After a long journey I was disappointed when Burz rudely informed me that the job was far south, in Water’s Edge near Leyawiin. Another long ride and I met the subject of the contract: an attractive Breton named Biene Amelion. 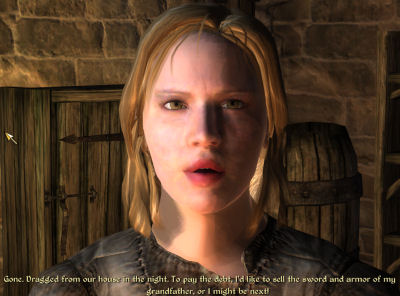 Biene explained to me that her father had been taken away due to some outstanding gambling debts. At first I was confused about the nature of the job – surely she didn’t expect the guild to intervene in such a matter unless her father was someone of some kind of significance. Indeed, she clarified – she wanted me to retrieve her grandfather’s precious enchanted armor and sword from the family tome so that she could sell them to pay off her father’s debts. While this sounded a lot more in line with my usual line of work I didn’t quite appreciate the idea of her selling off her precious family heirlooms and, indeed, robbing her own family tome in the process. Instead, having sized her up to be a decent person I decided take a more chivalrous route and simply pay her myself and let her keep her and her family’s honor intact. She was overjoyed with this previously unthinkable option and I got to head back up north in record time, knowing full well that my payment would take care of the majority of my cost and I’d recover the rest in due time.

Finally, I was dispatched back to Chorrol. Modryn performed a small ceremony and declared me to be promoted to rank of Protector within the guild for my exemplary performance. After the attending members cleared off he took me aside to tell me about my next job. My duty was to take Viranus Donton, the son of the Guildmaster, to help him get his feet a little wet and boost his confidence. Officially the mission was to search for Galtus Previa, a farmer who went missing exploring Nonwyll Cavern. I have no idea why a farmer would be heading into any wilderness caves or ruins alone though perhaps he was tempted by the same tales of riches that had drawn me into my life as an adventurer. 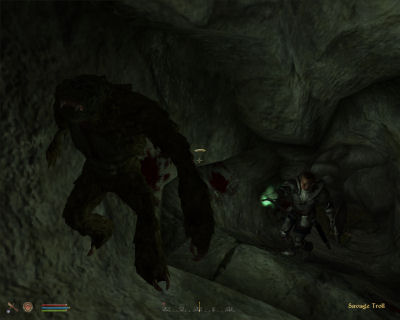 I met Viranus at his house in the city and we marched by foot into the northern wilderness to hunt for the cave. Viranus has a vague idea of its location and we soon found it easily enough. Almost as soon as we entered we were ambushed by a pair of bloodthirsty trolls. Thankfully Viranus wasn’t as green as Modryn let on and we were able to dispatch them without too much difficulty. Further into the cavern we encoutered more trolls and even an odd ogres or two. Nonwyll Cavern definitely wasn’t a place for farmers – in fact I was starting to wonder if the guild hadn’t misjudged my own qualities as a protector. Surely the Guildmaster wouldn’t look favorably upon her son dying under my watch. 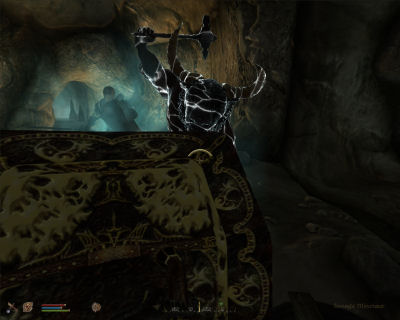 “Hiding behind my shield in mortal terror.”

More and more trolls rushed us as we explored the narrow passageways, in fact the most I’d seen in any one place up till then. Finally we made it to the bottom level of the cave only to be greeted by a fearsome minotaur. Finally, the body of Galtus Previa lay in front of us. Of course I wasn’t shocked to find him dead considering the opposition we encountered just making it down there, if anything I was surprised that the corpse had been brought this far below but hadn’t been devoured. We collected a couple of his personal effects to bring to his relatives to prove that we found him and Viranus attempted to map the location of the body in case his family wished to retrieve it for a proper burial.

Modryn was saddened to hear about the death of Galtus but quite intrigued by the shield we found with his body, confiscating it for further study. While I didn’t know what that was all about he was quite pleased with the completion of the contract regardless and rewarded me with my share of the gold and a powerful enchanted Daedric longsword which, my misgivings about furthering my bond with the Daedra aside, I’d no doubt be using. At last my guild membership was starting to yield some real benefits!

I didn’t expect such a nice blade for an reward in this quest but I believe Oscuro’s Oblivion Overhaul boosted the stats of this rare weapon. Sweet!