My next assignment was another seemingly typical job from my Fighters Guild experience up till that point. Modryn asked me to check up on a band of Guild members who were supposed to be cleaning out a troll infested cave but hadn’t been heard back from in some time. Modryn was particularly troubled by this one though, as the group was headed up by none other than Viranus Donton, the son of the Guildmaster whom I had brought along with me on an earlier assignment as a sort of confidence building and mentoring exercise. He was sure Viranus and his group would be able to handle the assignment and, even if it had been taking longer than anticipated, would have kept in communication with the Guild. Off I went to “Forsaken Mine” located near the city of Leyawiin. 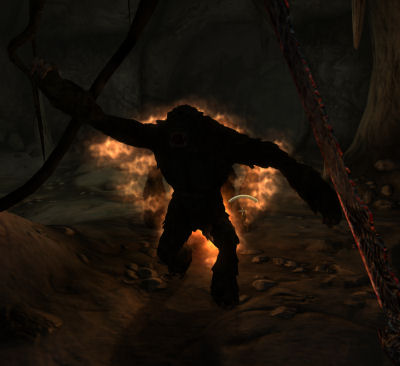 As soon as I entered the old mine it became obvious that something had gone terribly awry – there were a few bodies of Fighters Guild members scattered throughout the various shafts and rooms. Of course, I discovered troll corpses as well, but nothing that seemed to indicate that the trolls were putting up a particularly fierce fight. Curious, I checked the bodies of some of the dead Guild members and noted that they seemed to have mostly been struck by weapons – swords, axes, and arrows. Trolls are not known to be very intelligent creatures and definitely did not use more than the most primitive weapons such as sticks and rocks in my experience. While this was quite puzzling the riddle was soon solved in blunt fashion: amongst the bodies I found the body of a man wearing the telltale armor of the Blackwood Company. Had the Blackwood Company been here as well? It seemed likely that they were responsible for whatever happened here. Still, I had yet to encounter a body recognizable as as Viranus and had started to encounter the more and more living trolls so I figured I’d continue exploring the mines and at least attempt to finish the original contract. 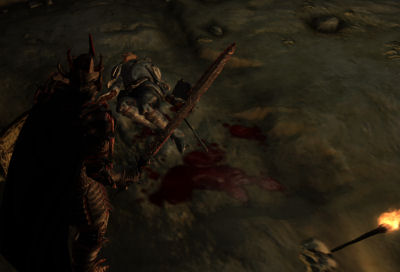 I did eventually discover Viranus’s body. I found a bloody journal laying nearby which was quite revealing. It seemed that Viranus’s group was clearing out the trolls when Blackwood Company members suddenly ambushed. As quickly as they appeared they then vanished. Viranus was gravely wounded in the attack but managed to crawl away and record his last moments in the journal as some of the surviving trolls searched for him. A disturbing end and one that would no doubt trouble the leadership of The Fighters Guild to as of yet unforeseen levels. 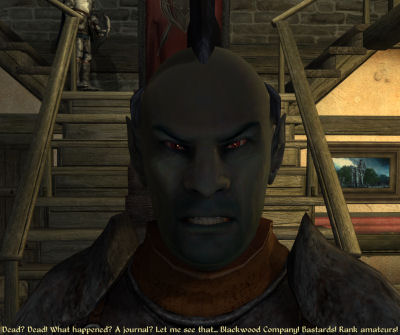 “Rank amateurs? That’s all he has to say after that?”

Modryn was quite angry. I could see the hatred in his eyes has he cursed the Blackwood Company and vowed revenge. He told me that he’d break the bad news to Vilena, the Guildmaster, himself but asked me to keep a low profile in the meantime. Given the circumstance and respecting Modryn’s wishes, I decided to ride far back to the East to see if Burz had any work for me at the Cheydinhal guildhall.

Good old Burz gro-Khash had a simple job, or at least it would have been pretty simple if he weren’t so concerned with berating me about making sure I did it properly. Still, I was getting used to his temperament and he was an Orc after all. I was tasked with locating and returning Orc nobleman Lord Rugdumph gro-Shurgak’s missing daughter. An Orc nobleman? Perhaps there was more to Burz’s tone this time around.

Arriving at Lord Rugdumph’s Estate I spoke with Lord Rugdumph himself about the contract. While Lord Rugdumph was quite an interesting character the case seemed pretty cut and dry: his daughter was likely abducted by a group of ogres who lived in a nearby cave. Off I went. 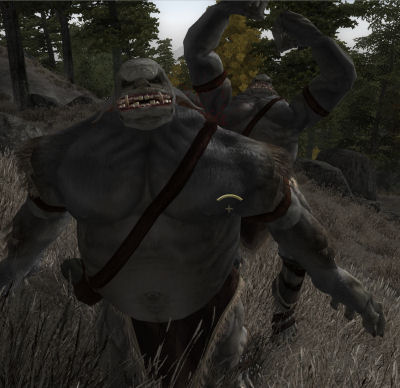 “Look at these cute little guys!”

After a short hike around the perimeter of the estate looking for clues I headed east towards the area that Lord Rugdumph had suspected I might find her. Sure enough, as I crept through the woods I spotted her surrounded by three brutish ogres. She seemed to be unharmed but without knowing for how much longer I jumped out from behind a tree and hurled a rock towards them to get their attention. It worked, as all three ogres started my way leaving Lady Rogbut to make a run for it. I drew my sword and fought the three ogres. Despite their size these ogres obviously hadn’t done much fighting in their day and were no match for a blade and a few well timed fire spells. As I wiped my sword clean on the last of the ogres I called for Lady Rogbut to escort her home. 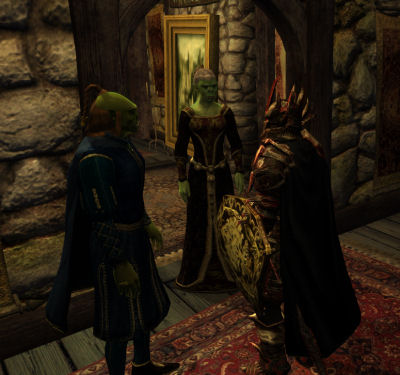 Burz was quite pleased about the fact that I was able to close out that contract so easily even if he seemed to be incapable of offering a complement that wasn’t backhanded. Thankfully I didn’t have to endure his unpleasant demeanor for too long as he had another job already waiting and offered it to me right then and there. The people of Harlun’s Watch, a small village south of the city, had been recently experienced a number of disappearances and wanted the Fighters Guild to track down their missing villagers.

I rode down to Harlun’s Watch and spoke to the contact for the contract, a Dunmer woman named Drarana Thelis. Drarana told me that the residents had started seeing strange lights in the swamp at night for the past several days and that some villages had foolishly gone out to investigate at different times, never returning. I waited for nightfall and then set off towards the swamp, sword in hand. 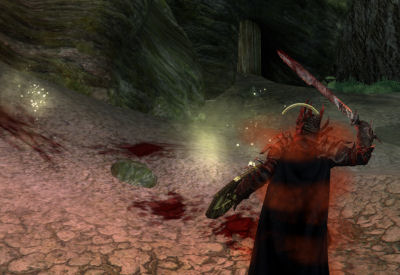 As I reached the swampy western shore of the Reed River I could definitely see them. Three bright yellow glowing balls hovering around the entrance to a rocky cave face. I watched them for a moment and noted them disappearing and reappearing. How unusual. I attempted to approach them stealthily but the terrain made it difficult to conceal my footsteps and soon I found myself stepping into a deep, wet hole causing my armor and packs to clang together loudly. Soon they were upon me and I could feel them sapping the very life from me as they hovered closer. These weren’t just lights, they weren’t some kind of mage’s enchantment or natural phenomena, these were will-o-the-wisps! I’d never encountered a will-o-the-wisp since escaping my cell many months ago but I’ve heard tale of them both in prison and since. I had personally always regarded them as legend… but here they were, attacking me.

I freed my foot and raised my shield to attempt to push the wisps off, giving myself just enough time to summon a Dremora Lord to help me fend off the attack. Although it took some time to take the wisps down I found that they caused a lot less damage to me than the rumors would have had me believe, thankfully. 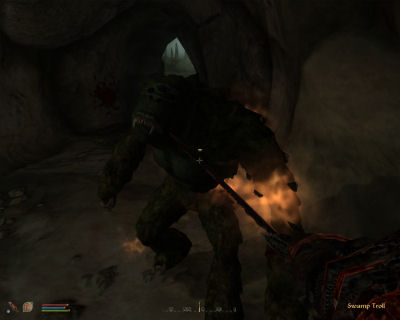 With no more will-o-the-wisps in sight I lit a torch and began to look for signs of what became of the missing villagers. With nothing obvious cluing me in I decided to venture into the near by cave. As I explored the dark, damp cave I soon came across a swamp troll which I quickly put down with my usual combination of fire magic and steel. Venturing further into the cave I came across more and more trolls. This place was absolutely rampant with the beasts, comparable to what the Forsaken Mine must have looked like before Viranus and company began clearing it out. Eventually I came upon a room where I found a grizzly site: a pile of bodies in various states of decomposition. The wisps must have lured the villages into the cave where they were then killed and eaten by trolls. Disgusting. I decided that since I couldn’t return any good news about the fate of the villages I should at least clear out the entire cave of these bloodthirsty creatures. 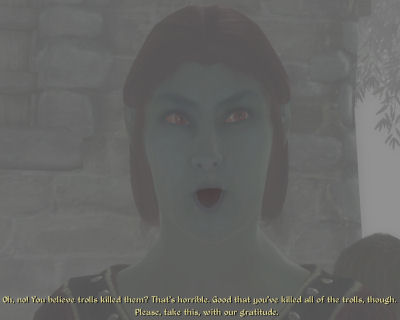 With my task complete I returned to Harlun’s Watch to bring Drarana the grim news. While she was disturbed to hear of the fate of her villagers she was at least pleased that I had taken care of the problem and rewarded me with a nice enchanted ring. I tried to refuse the reward but she insisted and I returned to Cheydinhal to report to Burz. With no more contracts available in the area I said my farewells, loaded my belongings onto my horse, and began to journey back out west to Anvil.

Random observation: Gah, you do a lot of looking for people in caves in these Fighters Guild quests!