As soon as I stepped into the Anvil guildhall I was greeted by Azzan who told me that he only had one contract on the books for me, but he had me in mind for it and wanted it taken care of as soon as possible. The job sounded interesting: apparently the Stone of Saint Alessia, a religious artifact of some significance to followers of the Nine, had been stolen from the Chapel of Talos in Bruma and I was to track it down and see it returned. I joined in a small banquet with some of my Fighters Guild brothers and then set off on the long ride north from Anvil to Bruma. 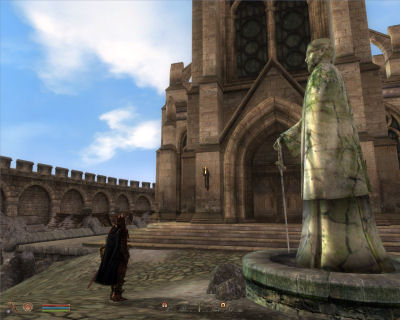 “Like a sore thumb, the Chapel of Talos in Bruma.”

Arriving at the Great Chapel of Talos in Bruma I was quickly greeted by Cirroc who introduced himself as the chapel’s resident healer. Cirroc said that 4 or 5 men were spotted leaving the chapel and heading east on the road out of the city on the night that the artifact was stolen. Bandits? Thieves? Pagans? It didn’t really matter – I left immediately, mounted up, and began riding along the road to the east.

Soon I came upon a lone Khajiit limping along the road back towards the city. By his dress I suspected that he was a bandit or a thief of some sort so I rode up upon him, leveled my sword to his throat, and began to question him. Surprisingly the Khajiit gave no resistance at all – without much prompting he fully admitted to being part of the group of thieves who had stolen the stone and that he suspected I was the one who was hired to retrieve it. He then told me that the gang had camped near the Ayleid ruin of Sedor when they were ambushed in the night by a large group of ogres. Apparently he was the only one who managed to get away. With the stone most likely in the possession of the ogres now I sheathed my sword and rode onward to the east. 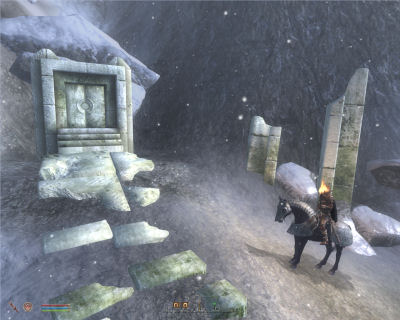 “Almost more appealing than staying out here in the biting, frigid cold… almost.”

True to his word I found the freshly devastated site of the camp exactly as the Khajiit thief had described it. There wasn’t too much to investigate though as it had apparently been looted clean by the ogres. Given the proximity to it, I figured there was a good chance that the ogres lived in the old ruins and made my way there. While Sedor resembled most Ayleid ruins on the surface when I breached the subterranean level it was obvious that something else had been living there, and recently too. 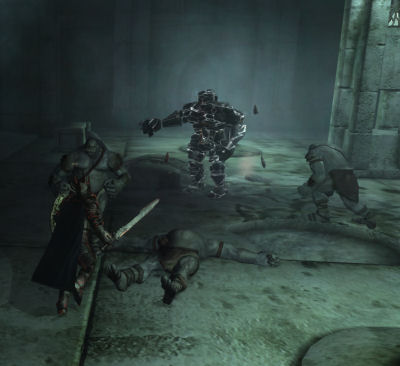 Creeping into the lower passages it was only a matter of time before I encountered my first ogre. Soon, one ogre became two, and then three, with the sounds of battle attracting them from all around. By the time I had cleared the ruin I had faced more ogres than I’d ever encountered in one place before and they were of a particularly fierce variety as well. Still, between my blade and my magic they posed little threat to me. I then tended to the unpleasant task of rummaging through their stores to find the precious artifact. Finally I found the stone placed carefully upon an pedestal – apparently the church weren’t the only ones fond of it.

Azzan had no more contracts for me and didn’t think Burz did either. Work was really starting to dry up for the Guild. When I made a casual mention of the Blackwood Company being at least partly to blame Azzan dropped several hints that I should give Modryn Oreyn a visit at his home in Chorrol. Curious… and at his home? Having nothing else on my agenda I set off back up north to Chorrol.

A rather dejected and somewhat washed-up looking Modryn answered his door. He explained how he had been relieved of his title and his duties in the Fighters Guild after the death of Viranus Donton. He didn’t seem too upset about it though, at least not in contrast to his focus on exposing and/or destroying the Blackwood Company. In fact apparently his time away from the guild had proven quite productive, as he had already started hatching a plan to delve deeper into uncovering their secrets. 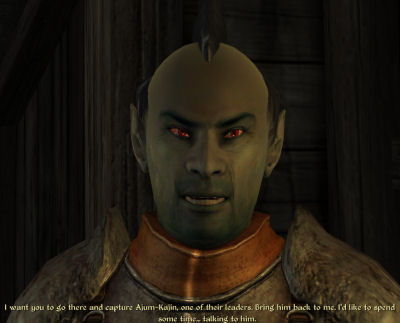 “”Seriously, you can just say we’re going to torture him for information. It’s not like I haven’t already ruthlessly murdered like 500 people for you…”

Modryn wanted to capture some high-ranking members of the group. This might have been fairly challenging under normal circumstances but he had learned of a camp being setup in a cave off of the Orange Road, to the east of the city. He theorized that this new hideout was probably meant to be strategically located near the Fighters Guild’s headquarters in Chorrol, perhaps they even had plans for a full scale war against the Guild. Regardless, one of their leaders, an Argonian mage named Ajum-Kajin, was said to be overseeing the project. Modryn then asked me if I’d do the honors of attempting to infiltrate the hideout and capture the Arongian. He feared that his Guild status and notoriety made him pretty poor choice for pulling such a stunt. I was definitely no fan of the Blackwood Company and had of course witnessed some of their schemes first hand so gladly volunteered to help out Modryn even if this time the job came without pay.

Glademist Cave was dusty, well lit with torches, with corridors lined with fresh supplies. Further into the cave I started coming across Blackwood Company guards. Although I had hoped to make a stealthy infiltration the layout of the cave system made avoiding direct action impossible. Perhaps if I had been able to disguise myself as a Blackwood Company member, but alas, after the first time I was spotted I was left with little choice but to slaughter my way to my goal. The Blackwood Company guards and other workers here seemed to be fairly inexperience and fell easily. Soon I was face to face with my target. 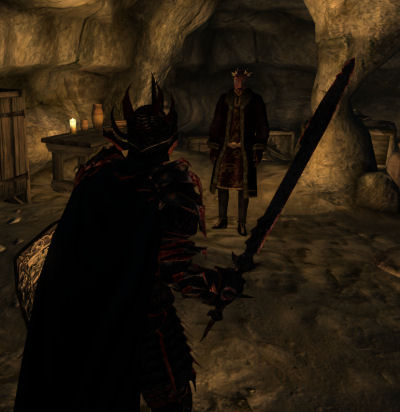 “Fancy meeting you here, my friend!”

The Argonian called for his guards but upon hearing nothing but silence in response, agreed to come with me. I lead him out of the cave with the tip of my sword in his back, then tied him up, blind folded him, threw him on my horse, and brought him to Modryn’s house. 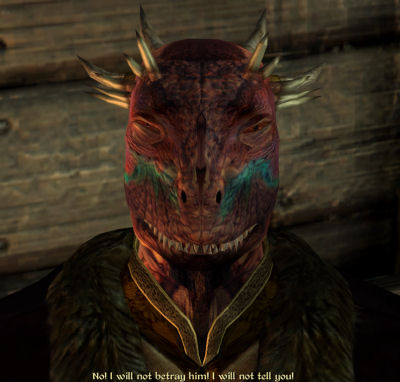 “This is where it gets ugly… (Argonian joke!)”

Untying Ajum-Kajin and having him sit down, Modryn and I began to interrogate him. He wasn’t cooperative at first. Modryn insisted we force him to talk but I decided to try to win him over by making it seem like we were sympathetic to him. At first he refused to have any of it but eventually I succeeded in swaying him a little. We learned of the Company’s size and who their leader was, but as we started to put more and more pressure on him to provide more details he suddenly screamed in defiance and exploded into a fireball nearly taking us up with him. He must have had some sort of enchanted item on him, or had some kind of a suicide spell, but regardless our interrogation was widely unsuccessful.

Modryn’s next course of action was slightly less direct but perhaps much more risky: He suggested that I infiltrate the Blackwood Company itself by pretending to be a perspective member. This was definitely a surefire way to learn more about them but how long would it take? Still, it seemed like an easy way to get started, providing of course that my identity hadn’t been linked to any of the previous assaults on the Company. I rode for Leyawiin while Modryn stayed behind to clean up the mess…