Oh yes indeed! I’m pretty damn stoked about my latest retro hardware pick up: I finally got myself a good General MIDI module! I’d been wanting a Roland SC-55 MkII for a while now. Instead ended up with its younger, more powerful successor, the SC-88. I ended up with a VL model, specifically, which is even better as I don’t have any need for the bigger footprint of the original version. Not only is the SC-88 a much more power module, it also has a totally different sound bank than the legendary SC-55 so everything sounds different in it. Not necessary always better since most General MIDI soundtracks were composed on an SC-55 but hey, it can also be put into SC-55 mode which, while not quite identical, does a pretty damn admirable job. 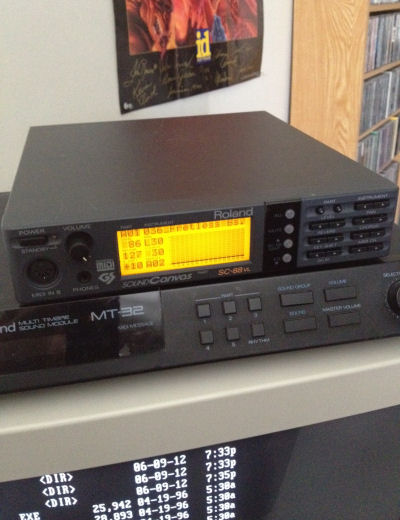 There she is with her grand pappy, the Roland MT-32. Speaking of which, it’s fucking nice not to have to be able to listen to General MIDI through my MT-32 trying to front as a normal MIDI module. It’s not a very dignified way to treat the old gal and the MIDI sounds pretty horrendous that way to boot. Speaking of horrendous sounds, no more MIDI via a AWE32 or even a GUS now. I’m moving on up!

Okay, enough mad gibbering for now. Since there aren’t many out there I intend on posting some SC-88 recordings of classic General MIDI tracks in the future, probably in conjunction with more retro reviews. Speaking of which, I’ve got one of those in the works at the moment too. Stay tuned!