There’s been all kinds of buzz lately around the release of Minecraft 360 Edition on Xbox Live Arcade. I first played the original all the way back in 2010 and I’ve revisited it plenty of times since and yet I still managed to get swept up by the hype. One boring evening I bought it with the intention of “just checking it out” for a couple of hours, max. That night ended up being the latest I’ve stay up gaming in a couple of years…

The game is largely identical to the PC version, save the crafting menu, the limited world size, and the Xbox Live integrated multiplayer. The biggest draw for me though was the achievements. I’m not exactly an “achievement whore” but I do sometimes go out of my way to go for those sweet, sweet points and, more importantly, some of the more creative ones inspire me to play games in different, interesting ways. While the PC version also has achievements these days I’ve pretty much ignored them. With Minecraft 360 Edition I set my sights on “one hundred percenting” them! The achievements in Minecraft are mostly tied to pretty basic things that you’re likely to get through normal play. Even some of the harder ones could be stumbled into, really. The most interesting ones to me were probably “Leader Of The Pack”, “When Pigs Fly”, “Into The Nether”, and “On A Rail”. 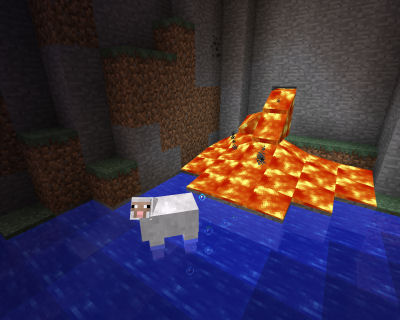 “Random picture of a sheep enjoying a hot soak. *shrug*”

I set off going for On A Rail almost immediately. The idea was simple: ride a mine cart 500m in one direction. 500m is, for the record, 500 blocks which is definitely nothing to scoff at. I believe the world size on Xbox 360 Edition is only 1024 x 1024 so it’s approximately half the width of the entire map. Damn!

So, I started by building a modest cabin and gathering the usual resources to kit it out nicely and start doing some real mining. I next built a massive 10 or 15 block wide one block stair step down from my home’s basement all the way to bedrock. This ended up being a pretty epic mine shaft and once I got to the bottom and started doing some strip mining out from there, then having to make a few exhaustive runs up and down for supplies, I decided would be a great place to build my new rail system. I’ve only dabbled with rails and carts in Minecraft and have barely scratched the surface on using Redstone but some experimenting and a bunch of gold and iron down the drain later and I had an awesome fast ride up and down the shaft. Nice! 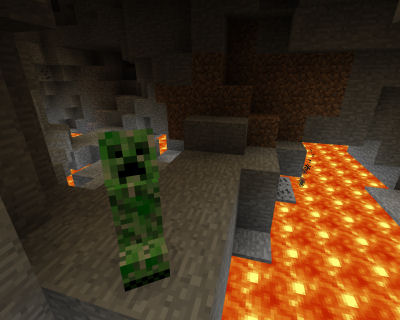 “Come here and give me a hug, you loveable little scamp, you!”

I next continued to strip mine just above bedrock from there, mostly searching for iron to continue my railway but I also started a new tunnel straight out from where my old track stopped to try to hit the 500m mark the achievement called for. This took quite awhile as I ran into the two walls I always seem run into with Minecraft: iron and lava. That is, a lack of the former and an abundance of the latter. At first I didn’t run into any lava and I was quite pleased with myself but eventually it hit. I mined around it. I hit it again. I mined around it again. I hit it again. Soon my track went from being straight to being this funky zigzagging mess. I also couldn’t find iron to save my life. In fact, I found far more gold and diamond than iron oddly enough! Eventually after extended my tracks a tiny bit yet again and not getting the achievement I realized that I had unfortunately forgot about the requirement of the 500m being in one direction. All of my lava detours meant that I’d be using quite a bit more than 500m of track. Doh…

For the second phase of the project I took my now MASSIVE collection of cobblestone and started building a 3 block wide raised railway from one end of the map all the way to the other, up and down mountains, through and sometimes totally over forests, over lakes, over lava pools. It was quite a construction project – in fact I ended up having to build a series of smaller houses to stay the night in along the way since I was so far out. On the plus side I did gather quite a lot of wood and other resources. About 2/3s of the way to the end I spotted a giant pack of wolves. I had no idea wolves spawned in packs like that and figured it was the perfect opportunity to get Leader Of The Pack. It’s a simple one: tame 5 wolves. 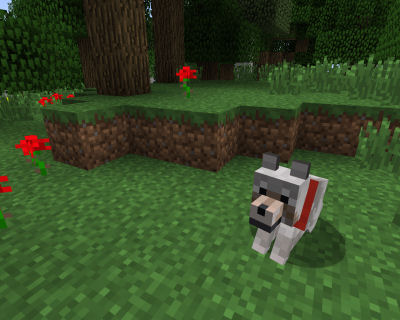 Now, I’ve never tamed a wolf in Minecraft so this was all new to me. It seemed simple enough – give them a bone and they become your pet and follow you around. Bone in hand I approached the pack. For a brief moment I thought to myself “I sure hope this doesn’t attack them…” and sure enough, hit the wrong button and was instantly mauled to death by a pack of 7 or 8 angry wolves. Okay, I’ve had some pretty funny deaths in Minecraft but this one was just fucking hilarious.

I eventually finished it and then dug up all my old track. Still not enough track to finish the entire railway nor enough for the achievement. Around this time I decided to explore a bit and poke around for some dungeons. Dungeons were also something I hadn’t really experienced yet and were required for the When Pigs Fly achievement. I figured the easiest way to find one would be to explore mountains and existing caves for signs of them. Shortly after starting I discovered a MASSIVE cave system and it was absolutely chalk full of iron to boot. My expedition to explore and mine these caverns became such an undertaking that I had to come and go to restock on food, torches, and picks multiple times. One of the times I was making a supply run I ran across another pack of wolves. This time I didn’t make the mistake of accidentally hitting with the bone instead of using it and tamed my 5 wolves. Achievement unlocked! I figured while I was taming 5 wolves I might as well use all my bones and ended up with a ridiculous number of wolves all following me into the caves. Unfortunately this actually became a huge nuisance for some of the riskier mining and climbing I had to do as the dumb bastards had a bad habit of blocking narrow paths and even nudging me off ledges. Eventually the problem resolved itself as they all dove into a huge, dark pit to attack some skeleton rangers and zombies never to be heard from again. 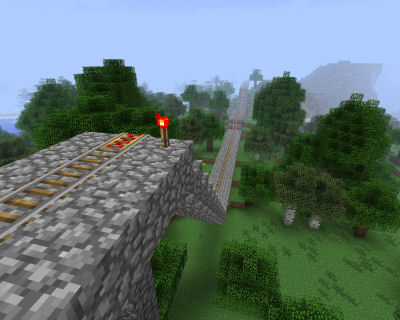 By the time I was through with my crazy cave exploring expedition I had more than enough iron to finish my track. One long, glorious ride later and achievement unlocked! Now that was a long, hard, but fun achievement. The railway was useful too, and I ended up adding enough powered rail to make it 100% automated in either direction. One of my favorite Minecraft engineering projects ever. 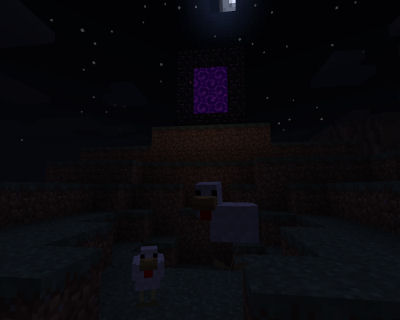 “The chickens and moon alignment aren’t related to the achievement… just something I’m into. Don’t ask.”

Next I set out for building a Nether Portal for Into The Nether. Again, I’ve never built one. To make one you need to mine some obsidian. Obsidian is formed when water his calm patches of lava. Now, lava and water mixing isn’t super rare to find but in my experience it’s almost always running lava hitting calm waters, or two running streams coming together. These both produce boring cobblestone – nothing at all notable. Most of the lava I had encountered was in my mines under my house and wasn’t exactly safe to try to play with so I began looking for other alternatives. I first decided to try making an artificial lava pond by using buckets to fill small trenches I’d make and then pour water buckets on top. Unfortunately the lava produced by buckets this way is flowing and therefore not suitable for producing obsidian. Fortunately I realized the very source of lava I was using had a bunch of calm patches so I began dousing it with water. A little while later and I had stepped into the Nether for the first time. Achievement unlocked! Annoyingly my 360 locked up when I tried to leave the Nether (not uncommon from what I’ve read) and I lost my save though I ultimaltey looked at it as a good thing since I didn’t need a Nether Portal in my front yard and I preferred my little lava pond being filled with beautiful glowing lava and not blocks of half mined obsidian.

Finally all I had was the When Pigs Fly achievement. This one is the most bizarre of all of them. You have to find a saddle, which can only be found as random loot in a dungeon chest, put it on a pig, and then ride the pig off of a ledge tall enough for it to take falling damage. Alrighty then. Unfortunately I still hadn’t found a single dungeon anywhere in my world and continued to search for one. Eventually I decided to cop out and start a new world using one of the seeds that people had been passing around to get this achievement – one where you spawn right next to an exposed dungeon that always has a saddle in it. Nice! 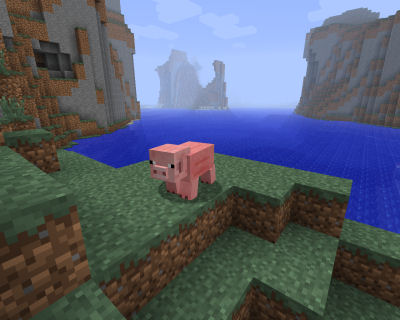 This isn’t the end of the challenge however. When you mount a pig *insert dueling banjos here* they freak out and start moving erratically, not unlike a bucking bull, so you can’t really control them to force them off a ledge. I ended up having to try to block one in on the side of a cliff, saddle him, climb on him, and then wait until he got close enough to a ledge that I could hit him and cause him to jump off. It took a while to pin him in and it took almost as long to get him to wander close enough to a cliff but finally… achievement unlocked!

Screenshots are actually recreations and general screwing around in creative mode on the PC version – not actually the Xbox 360 Edition and not my actual world, unfortunately.