Duke Nukem Forever doesn’t need much of an introduction – it’s incredibly well known even if mostly thanks to its lengthy stint as the official Internet poster-child for vaporware. The game did take an utterly ridiculous 15 years to see the light of day so fair enough. Upon release though, the game got trashed by seemingly every other person on the Internet with a keyboard and a passing knowledge of it. I suppose it’s somewhat understandable, I mean no game could possibly live up to 15 years of built-up hype and it would have taken a miracle to convert public perception of the game after that long. Whatever! I hate pile-ons and I’m willing to look at it with an open mind. So is it really that bad? 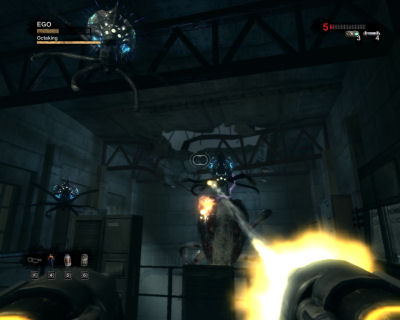 “Somehow they made me hate octabrains even more.”

Just like Duke Nukem 3D, Duke Nukem Forever is a first person shooter in which you play as the venerable hero Duke Nukem as he tries to stop an alien invasion of near-future earth. Despite the similar story setups the gameplay makes a notable veer away from that of the first game. Considering how dramatically the FPS genre has changed since those early days it would probably be more notable if it didn’t, though. Instead DNF takes obvious queues from its successors. Games such as Half Life 2 and Halo are obvious influences with a much more guided, linear approach to level design, cutscenes and somewhat of an actually recognizable plot, driving and turret segments, and even physics puzzles. Controversially, it also incorporates features such as recharging health and a limit to how many different types of guns you can carry at a time. 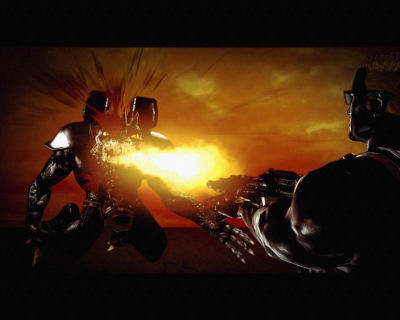 “Scoring a headshot in the awesome intro sequence.”

The game was nice and short, clocking in at around 10 hours for me. I think my favorite parts of the campaign were the sections where you got shrunk down in size. Sure, it’s a bit gimmicky but it reminded me of all of those old “giant” user made maps we used to deathmatch on in games like the original Unreal Tournament. Too fun! I was actually reminded a lot of Prey during the game, somehow, which is mostly a very positive comparison to make. All said my only real complaint about the gameplay (noting that I played this patched meaning I could hold 4 weapons instead of just 2… thankfully) is that I felt like the difficulty was noticeably inconsistent, with boss battles being a big spike up compared rest of the game. I know that isn’t necessarily unusual (bosses are supposed to be hard, duh!) but I’d literally go for a few levels without ever being in any real danger only to die 10 times in the first phase of a boss fight. Irritating. 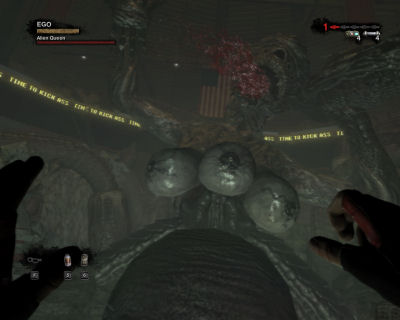 “This screenshot is gross on so many levels…”

DNF still features all of the referential humor and satire that Duke Nukem 3D was known for only this time it’s totally cranked up. I swear, some of the damn silly lines Duke delivers and situations he gets in this time around make the game seem almost like parody of Duke 3D and I often found that funnier than the actual jokes. Unfortunately the casual objectification of women of the previous Duke Nukem games is also cranked up to absurd if not outright offensive levels and where Duke 3D flirted with nudity DNF has tits and ass all over the place. Thankfully despite large doses of it early these scenes make up a relatively small portion of the game and the aforementioned ridiculous tone of the whole thing makes it hard to take too seriously. I do have to wonder if they really missed the boat on their target audience by delaying the game so long though. That is, it seems it probably won’t resonate with today’s younger gamers and since so many of us who played Duke 3D did so as kids and teenagers it likely won’t appeal to us in quite the same way either. I guess what I’m saying is that Duke is a bit of a relic.

Moving on from the negativity for a moment, also back from Duke Nukem 3D are most of the weapons and enemies, all more or less intact. Hell, the game even starts out with you reenacting the boss fight from act 3! Awesome bit of fan service there. I was disappointed that they got rid of Duke’s “mighty boot” as an always available melee attack (a feature that was ahead of its time!) but I still enjoyed tearing up alien scum with the ripper and sending rockets into the asses of those annoying octabrain bastards. There were plenty of other throwbacks to Duke 3D in the game, from classic lines to all of the neat little interactive environment objects (which now actually serve somewhat of a purpose) but my favorite of all had to be the glorious introduction to the game which recounts the plot of Duke 3D in a highly stylized, James Bond movie intro sequence like way. 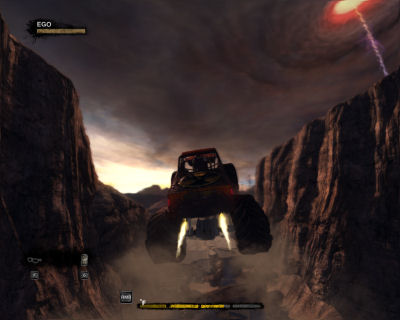 “Offroading in the Mighty Foot.”

The graphics got panned a lot when the game was first released but I found them to be decent enough with the character faces and animations being the main low points. I was actually pleasantly surprised to find that the game did a good job of representing your whole body from first person – something somewhat rare that I personally really find helps me get more immersed in first person games. The sound is decent and while the music seems like it mostly consists of throwbacks to the classic soundtrack of Duke 3D let’s not forget that people fucking love the soundtrack of Duke 3D! I didn’t really encounter any of the bugs, performance problems, or any of the other technical issues I heard a lot about though I understand those issues were mostly with the console versions, never mind the fact by the time I got around to playing DNF it had already been patched more than once. 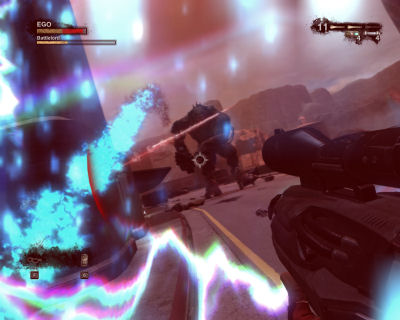 “I’m not entirely sure what’s going on here but I like it.”

Overall, while it definitely doesn’t feel like 15 years of work (because it isn’t, technically) it is a fairly solid effort and even with its modernized systems it manages to feel like a bit of a throwback to the golden era of FPS games. That said, unless you’re a big fan of Duke Nukem it doesn’t really have all that much to offer. Still, the answer to my original question is a resounding “no!” Duke Nukem Forever might not be amazing, it might be offensive to some, not at all funny to others, and not at all worth waiting 15 years for, but it certainly isn’t the horrible train wreck piece of trash that you’ve probably been led to believe it is. Bandwagons… blech.