I haven’t posted in nearly 4 months. Shameful, I know. I have been gaming a bit though, for sure. In fact one of the main reasons for my lack of updates in the last 6 or 7 months was climbing back onto the vile World of Warcraft bandwagon. I haven’t mentioned it much on here because I’ve been about ready to quit again, once I completed the last of several goals I’d been working on. After that I planned on writing an entry all about my return and what I had accomplished with my time. Unfortunately that last goal has turned out to be a total pain in my ass – expect that post if I finally do meet my goal but I’ve all but stopped again as it is so that seems unlikely. 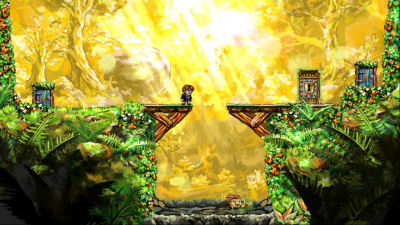 I got around to playing Braid on XBLA. I actually played through the demo at around the time of its launch and honestly most of my critical analysis of the awesome, creative puzzle mechanics is probably back there somewhere since I was pretty blown away by them originally. Even blasting past that topic, I loved the art style and absolutely adored the music. Despite how mind-bendingly difficult some of the puzzles might seem to some players (personally, most came to me easily, though I did definitely struggle hard with a few of them) it’s still very worth checking out. Notice how I skipped talking about the narrative? 😉 Seriously though, I actually enjoyed it at first and like what they’re were going for though the end came out of nowhere and didn’t really do much for me. In the end though, it didn’t seem crucial to the experience – how much did the story in any of the Super Mario games (and the comparison here is appropriate given all of the obviously influence and callbacks) ever matter?

I finally finished my run through of Fallout 3 + all of the DLC. I got pretty much all of the achievements I could get in one play through and had a blast. My insanely sporadic playtimes made me come to some odd conclusions about my gaming habits as of late: I’m getting too old for this shit. Seriously, I seem to only want to jump into most games (basically anything I’m either not insanely addicted to, or anything that isn’t extremely “pick up and play” friendly) when I have a couple of hours or more free in one sitting, and even then I have to be “in the mood” which I’m often not after a long day at work or whatever. If it is going to take me a year to finish a decent sized RPG for now on I suppose I’m going to have to stop spending as much time and money on this hobby as right now it’s just a little out of whack. 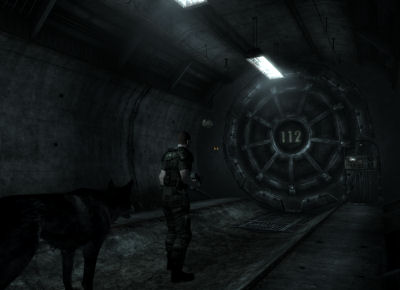 Back to the game though. Obviously I loved Fallout 3 – I mentioned that in my last update about it. How could I not? I loved the original Fallout games and I love the Elder Scrolls series so… yeah? I’m not going to get into a big, detailed review of it or anything but I did want to mention one unexpected surprise: The Pitt DLC campaign. Whaaa? Although I know it often gets praise as being one of the better DLC add-ons for Fallout 3 I don’t remember hearing anything about the whole moral dilemma you’re faced with in it. Hell, maybe I did and simply forgot all about it since then, but in any case… spoilers in the next two paragraphs!

So, the basic setup for The Pitt (I’ll try to keep it fairly general) is that you’re contacted by a runaway slave who wants you to infiltrate the city which is overrun by an oppressive, ruthless group of slavers who force their slaves into working in their factories while they reap the benefits. They also all have some horrible radiation sickness and the leader of the slavers is apparently hording the cure for his very own. Seems straight forward enough and when you arrive as sure enough, sick slaves everywhere and the people in power are stacking the bad karma deck without question. Once you finally infiltrate the slavers and confront the leader, however, you learn that all isn’t as it appeared – the cure is actually a baby and the ex-slave who talked you into the whole thing in the first place is actually an ex-slaver who was forced out after a failed coup attempt looking for revenge. Seems like the situation is getting greyer. Still, why would I want to leave the baby in the hands of these assholes? Plus, who cares if the other guy is an ex-slaver himself, he clearly wasn’t lying about this place being packed with slaves and this sickness killing everyone. I stole the baby and vaporized the leader of the slavers, and most of the rest of them while I was at it. 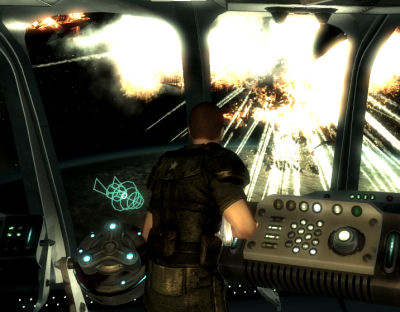 “Fireworks are always better when they’re made out of your enemies.”

The plot thickens. Audiotapes reveal that the leader of the slavers was an Paladin of the Brotherhood of Steel who got stranded there after cleansing the ruins of the city long ago. Hm, well that still doesn’t mean he wasn’t an asshole, I suppose. Left there alone, he built up his gang and the settlement himself including bringing the factories back online. He regretted the slave labor but viewed it as a necessary evil and even planned to eventually set them all free. Hmm. He was also the father of the baby in question and, it’s revealed, seemed to genuinely care for the kid. He also viewed his research into the cure in a philanthropic way – he didn’t seem to be hording the cure at all, it simply wasn’t finished. *gulp* I might have made a bad decision but… well, at least the slaves are free, right? So then I get back to the people I was working for to discover the guy acting like a total fascist asshole himself and implying that the baby was now in much worse hands. It also only took me about 2 seconds to notice that the slave labor still appeared to be in full effect around the settlement – maybe the people in the chains had changed, but still… what exactly have I done here?!

This is one of the most interesting moral dilemmas I’ve run into in a game in recent memory. Most fascinating was probably the fact that I really wasn’t ever asked to make any clear cut, black and white choice on the matter. Sure, I was forced to pick a side but it was before I had all of the intel. Even after all of the cards were on the table it was still a pretty nebulous situation with no obvious right choice… and the fact of the matter is, not unlike after the big reveal in Bioshock, I felt totally played after it was over. Nice! 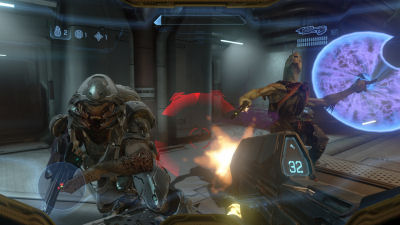 “These guys, yet again…”

What else? Oh yes, I bought and played Halo 4. I’ve talked about the Halo series on here a lot in the past so I’ll skip the background and the in-depth analysis and just say that 343 Studios did a fine job. It still feels very much like a proper Halo game yet makes necessarily measured steps into new directions. I enjoyed the new multiplayer advancement (for example) though so far I prefer Firefight over Spartan Ops. Most of all, I just enjoyed returning to a universe that I’ve always really enjoyed. As far as that goes though, I might have enjoyed watching Forward Unto Dawn more than playing the actual Halo 4 campaign. *shrug*

Next up is a play through of the original Saints Row, if I can manage to slog through the grind. Oh, and I also started a new blog which I’ve been filling full of random non game related stuff – mostly related to music and just general expressive bullshit. I’ll link to it eventually when I have more content. Hell, maybe I’ll even merge it into this one and make it a little less gaming focused. Stay tuned!