The Shade of the Worm

After riding back to the Arcane University I met with Raminus once again to update him on my progress at Vahtacen. While he seemed genuinely grateful for my excellent work at the site I sensed that he had something more pressing on his mind. When I told him that I was ready to receive my next assignment he leapt at the opportunity to fill me in on the details. The next step in investigating the seemingly growing epidemic of rogue necromancy throughout Cyrodiil was to learn more about the nature of Black Soul Gems, like the ones I found in Falcar’s belongings in Cheydinhal. He directed me to find out what Tar-Meena at the University’s archives knew about them.

Master-Wizard Tar-Meena was the guild’s leading expert in magicka arcana and it seemed like her expertise had been in high demand at the time. When I approached her in the Mystic Archives she was in the middle of conducting some sort of research, books and scrolls strewn about all around her and oblivious to my arrival. When I attempted to interrupt her she started ranting at length about all of the pressure the Council of Mages had been putting on her. After letting her finish I told her that I’d been specifically ordered to find out more about Black Soul Gems. This seemed to calm her a bit, as apparently that specific subject was one that she hadn’t already been relentlessly hounded over. She pointed me to a tome called “Necromancer’s Moon” which she said was one of the few places she’d ever found any details about the objects recorded. Interestingly enough she also mentioned that Falcar had borrowed it previously. After spending quite awhile sifting through old spell books and volumes of obscure alchemical reagents I eventually discovered the book sitting on a small table by itself. 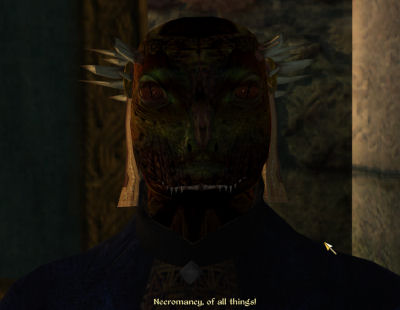 The book contained a number of important details. First, it seemed to be a call to an order of necromancers called the Order of the Black Worm. Signs had been pointing to the increase in necromancer related activity having been organized but now it was confirmed without a doubt. It also mentioned what sounded like some kind of a magical or perhaps celestial event that signaled an opportunity to create the Black Soul Gems. It could have just been colorful writing but regardless I immediately took this information back to Raminus. Raminus found the allusions to the “heavenly light descending from above” to be as fascinating as I did and directed me to Bothiel, the university’s astronomy specialist, to try to learn more.

Bothiel didn’t know much about this “Shade of the Revenant” event but did recall another mage, none other than Falcar, asking her about it in the recent past. Bothiel also recalled Falcar having a stack of scrolls and papers with him, one of which he had accidentally dropped. The paper contained hastily scrawled notes relating to the names of four locations. Raminus recognized the name of one of them, Dark Fissure, as being a cave in the Valus Mountains, not far from the Vahtacen site near Cheydinhal. Although we didn’t know precisely when this “Shade of the Revenant” event would take place we formulated a plan to stake out Dark Fissure Cave for suspicious happenings. 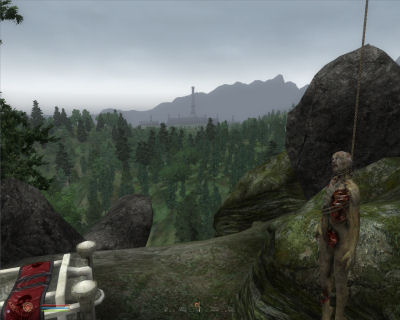 “Looking back towards the Imperial City from the Dark Fissure altar.”

Arriving in the afternoon, I sat high up, wedged between two large boulders for hours until well after sunset. While I had fully expected to spend days, perhaps even weeks camped out near entrance of the cave, to my surprise that very first night I witnessed the Shade of the Revenant as well as a necromancer performing some variety of incantation there. It was unmistakeable – a sinister purple glow enveloped the altar as the necromancer strained against the magical forces pushing out against him. Just then something startled my horse, which I hadn’t yet had opportunity to tie up further away, causing the conjurer to stop to investigate. He summoned a zombie and began approaching, scouring the area for intruders. Having seen what I had come to see, I leapt down from my perch and pummeled the necromancer square in the head. A scuffle ensued but, having the initiative, I slew him relatively easily. After inspecting the altar curiosity got the best of me and I decided to take a look at the cave itself. 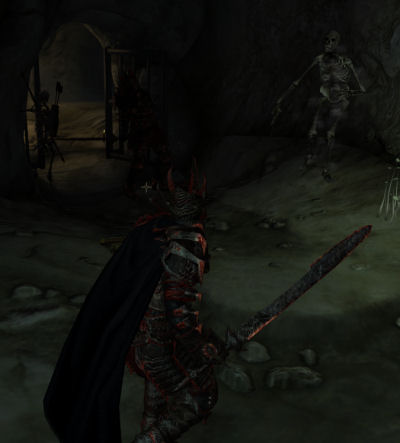 The Dark Fissure cave was large and definitely occupied. Every large chamber contained the camp of another necromancer or two, and they left little doubt that they all belonged to this same order I had found reference to earlier. After having cleared the cave, which was no small task, I returned to Raminus who was disturbed to learn that the ritual described in “Necromancer’s Moon” was in fact a reality, and that this order appeared to be quite active to boot. He bestowed me with the rank of “Magician” and told me that I should go directly to Arch-Mage Traven for my next task. 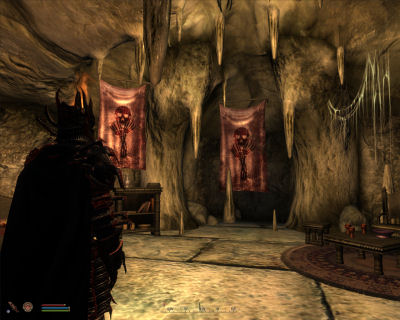 Arch-Mage Traven seemed pleased enough to make my acquaintance but began getting down to business very quickly, and when it revolved around necromancy he seemed to take business very seriously. He explained to me that the Council had been quietly monitoring the increased necromancer activity in Cyrodiil for quite some time, most notably by use of a guild member, Mucianus Allias, who had infiltrated their ranks. Between having not heard from him in some time and the recent escalation in necromancer activity, Traven wanted to pull the informant out. The Council had other plans, as they were suspicious of Mucianus and suspected the lack of contact was due to something more couched in treachery. A group of Battlemages were dispatched to Mucianus’s last know location with the intent on bringing him in for questioning. The Arch-Mage wanted me to intercept them to make sure Mucianus was returned safely. He handed me a hastily sketched map to the ruins of Nenyond Twyll, south of the White Rose River, just below the city, and bid me fast travels. 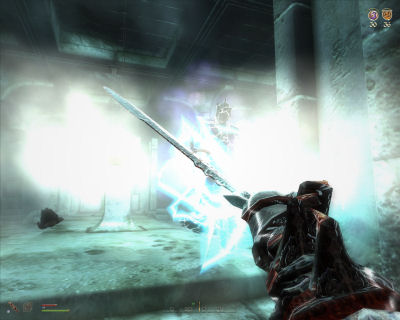 Not fast enough! It seemed that I had arrived at the ruins only moments too late. The Battlemages’ horses were already tied up outside and when I entered the still intact lower passages I was confronted by a jumpy a Bosmer Battlemage who introduced himself as Fithragaer. Fithragaer told me that the group had been ambushed and that we had no time to waste in helping them. We raised our weapons and rushed forward into the next chamber. In his haste and perhaps inexperience, the Bosmer ran straight into an Ayleid spike trap and was instantly impaled. As I waited for the trap to reset and clear the way I assessed the situation a little more carefully – I heard no sounds of combat around me but there definitely had been fighting here. I was indeed too late. Regardless, I still had to find Mucianus. 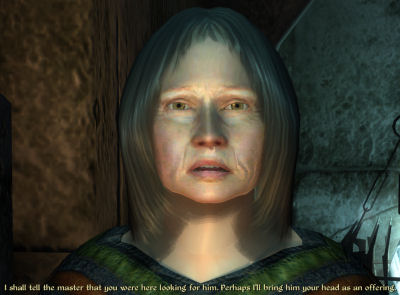 As I ventured further into the darkness of the ruins of Nenyond Twyll I met my first group of necromancer attackers. Nothing outstanding about them at this point, but I was careful to give each one an opportunity to reveal their identity before attacking them. One of the necromancers I met revealed that she knew why we were there and told me that Mucianus had been turned into a “Worm Thrall” for betraying her master. I had no patience for vain speeches or vague threats and decapitated her where she had stood, her minions crumbling around her as she fell. I searched the ruins for quite a while afterwards, always expecting to find the informant waiting for me in some dark corner, but alas I had cleared the entire ruin without a sign of him. 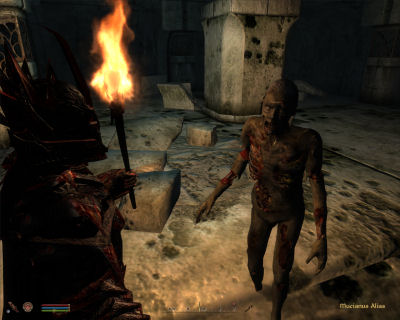 “Mucianus Allias, slightly under the weather.”

Finally, as I was backtracking towards the exit I investigated a faint scratching from behind a stone wall to discover hidden pressure plate that revealed a secret room. Mucianus Allias was locked inside, or at least his zombiefied remnants were. I set the twisted automaton ablaze with a quick flame spell, resealed the room, and continued back to Traven with the ill tidings.

The Dark Fissure was actually a fairly interesting fight, as it was one of the locations heavily modified by Oscuro’s Oblivion Overhaul to included special NPCs and some tough, leveled enemies. It feels a little odd to be suddenly challenged after tearing through most of my fights with ease.