When I arrived at the Arcane University I immediately made my way to the Council Chambers to present Arch-Mage Traven with the Necromancer’s Amulet. The Arch-Mage was much less interested in the return of the artifact than he was the news of Caranya’s deception, hardly able to believe that one of his closest and most trusted advisors had betrayed him so. He then declare that I was to be his only advisor and that no one else on the Council or in the Guild could be trusted with his plans until the necromancer threat had been stamped out. With that he had my next task for me. I was to meet up with a small contingent of Imperial Battlemages to sack the ruins of Silorn, wherein the Worm cult was producing large numbers of Black Soul Gems. Most significant, they were apparently working on a special Colossal Black Soul Gem for Mannimarco himself to use as a powerful weapon. Traven was vague about his intentions but it seemed that he wanted the Colossal Black Soul Gem himself.

At Silorn I found Thalfin, Merete, and Iver hiding in wait behind some of the outer walls of the site. When I introduced myself they explained that, unaware of reinforcements arriving, they had already tried storming the stronghold but the door was magically sealed. In the ensuing chaos they lost a man and were forced to retreat. Their new plan was to wait for the necromancers to leave the sanctuary of their liar again and strike then, hopefully by surprise. Just then, both Thalfin and I heard the familiar sounds of stone sliding against stone and everyone rushed to take up better positions around the entrance. 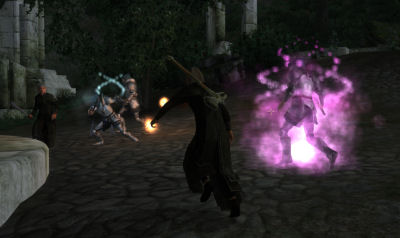 Worm cultists came marching into the ruined courtyard in two columns, totally unaware of us, their lanterns casting a glowy bloom against the hazy gray of the stormy day as they swung. When the group passed the first of our hiding positions the attack was on. Minions were summoned, lightning, fire, and ice spells shot out in every direction, and the sounds of shield, axe, and mace ringing together joined the shouts and screams to make a chorus of battle. The plan was a success – we slew them all without taking any casualties of our own. All but one – the one who appeared to be their ring leader, walking at the center rear of the group when they first emerged, had ran back below the moment we sprung on them. While the Battlemages cleared the field and gathered themselves I continued into the now unprotected inner structure of the ruins of Silorn. 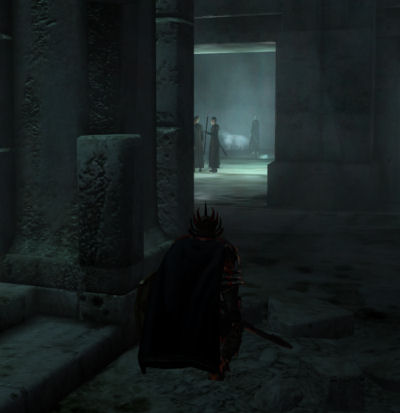 The inside of the ruin resembled most of the other necromancer lairs I have encountered up to that point. Macabre decorations accompanied by the odd makeshift study or alchemists’ lab, but otherwise nothing but a dusty abandoned dungeon filled with undead. These undead though, were commanded by the living, unlike most of the other places I had plundered as an adventurer. I’m not sure whether that made it better or worse. Regardless, I slew many a necromancer of varying skill, shuffling zombie, undead warrior, powerful lich, and spectres bound by the foul cultists to do their bidding. Many of these battles were quite difficult and I found my trek deeper into Silorn in search of the Colossal Black Soul Gem growing a challenge with every new room. Finally I reached one of the last accessible rooms in the ruin and found my target. The elf who ran was not just any necromancer – it was none other than Falcar, from Cheydinhal! Likely knowing he was cornered Falcar wasted no time pressing the attack. After a short but fierce battle I stood over Falcar’s corpse, Colossal Black Soul Gem in hand. 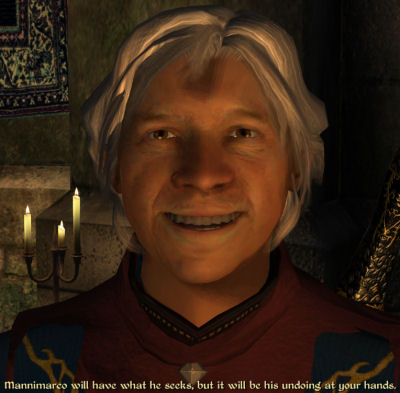 “Traven seems quite happy with his plan, all things considered…”

I parted ways with the Battlemages, who were sweeping through the inner ruins much further behind me, and immediately set back to see the Arch-Mage. Traven didn’t seem at all surprised to see me back with the gem and immediately took it from me and held it in both hands. His mood was grim as he told me that I would deliver the gem to the King of Worms myself but not before it had been infused with an extremely powerful enchantment that would keep me from being turned into one of his thralls, giving me the chance to strike him down. His orders were simple enough. He then proceeded to tell me that I was to be Arch-Mage of the Mages Guild after he was gone. Before I could put two and two together Traven’s body lay dead on the floor, crackling with arcane energy. He had infused his own soul into the Colossal Black Soul Gem. No, I didn’t see that turn of events coming at all but Traven had left me with no real option but to finish carrying out his plan, both to honor his sacrifice and to put an end to Mannimarco and his cult. I took some time to gather my head and then set forth for Echo Cave to the far north of the Imperial City to see my task through. 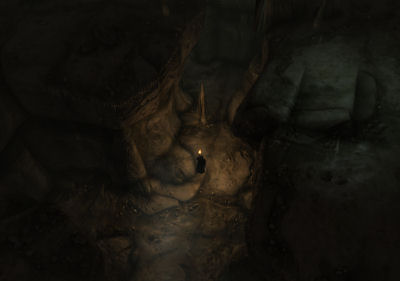 The entrance of Echo Cave was guarded by a powerful necromancer who challenged me as a I approached, claiming that he was the only one who held the key and he would not part with it while a living breath still rolled through his body. Naturally, I obliged. The King of Worms picked a worthy wizard to guard his lair, as he was quite skilled with all schools of magic, not just conjuration. He used illusions to hide himself while peppering me with fireballs and curses, yet to hide from me without running is just prolonging your enviable defeat, and soon I was walking through the great rock labyrinth of the cavern, torch in hand, seeking my audience with this false king. 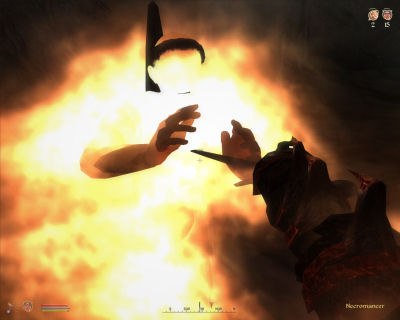 Echo Cave was without a doubt the headquarters of the Order of the Black Worm – it was positively teaming with Necromancers, some guarding, others researching, and still others going about their Order’s more menial duties. Each one, though, fed their blood to the thirsty edge of my Daedric longsword. Thankfully Mannimarco’s cultists didn’t appear to be expecting attack as guards were never placed in sufficient number as to be a real threat to me. Some of the higher ranked necromancers were skilled sorcerers, many probably defecting from the upper ranks of the Mages Guild long before I ever sought to join it, but one on one, or even one on two, I could manage them well enough. Finally I reached the last area of the cavern, a large chamber with a sizable underground stream running through it. The King of Worms sat on his throne on the other side of the stream, no doubt very much expecting my arrival. 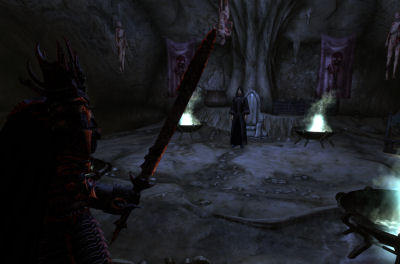 I cautiously stepped across the narrow stone ledge leading to the throne. I thought for a moment that I might have actually caught him by surprise but all at once he stood, raised his hands, and I was trapped. Not only by his magic, but giant bony spikes rose from the ground like the grasping fingers of great giants and turned that side of the stream into a island. Paralyzed, my blade dropped from my hands, my back straightened, and my chin rose to bring my gaze directly into his eyes. Mannimarco expressed disappointment in not being able to meet Arch-Mage Traven himself and proceeded to mock him, the Mages Guild as whole, and me of course. He told me of his plans to enthrall me regardless. The joke was on him, of course, as he was about to meet Traven in a very unexpected way. 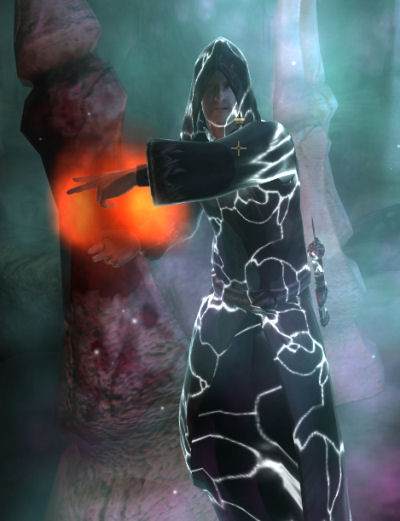 “The King of Worms strikes a pose.”

Mannimarco cast a quick spell no doubt meant to turn me but nothing happened. Confused, he attempted it again but this time his words of power were met with the response of a powerful blast knocking him off of his feet. I was released from his paralyzing spell and immediately reached for my sword. In a blink of the eye the King of Worms had regained his feet and started summoning. Liches appeared, at first two, and then three. I had no choice. I would need to kill him right then before he summoned a whole undead host to overwhelm me.

I concentrated long enough to summon a Daedric warrior from Oblivion to help distract some of the liches and focus on gaining ground on Mannimacro himself. I successfully landed a few blows as he tried to back up and weaken me with further curses. Another blow and he stumbled backwards, clearly injured. He composed himself and prepared a powerful fireblast to send my way but my reaction was quick and I sent it bouncing off of my enchanted shield, landing in the surrounding waters and producing a huge wall of rising steam. For but a moment this caught his eye, just long enough for me to land a forceful swipe of my sword cleanly into the sinewy meat of his neck. The liches suddenly vanished leaving my Daedric minion swiping at thin air, searching for his foes, and the bony barricades crumbled into dust and vanished before me.

Mannimarco was dead. The King of Worms was dead! The cost was terrible but the Mages Guild would rebuild, and few would ever know how close it had come to total annihilation.

Once again Oscuro’s Oblivion Overhaul conspired to fuck me, despite being level 40 and have pretty decent gear. Practically all of the enemies in these two dungeons had been replaced with much more difficult ones. Spectral warriors and spectral wolves were everywhere and a large portion of the necromancers were replaced with the much more difficult Keepers of the Dead. Ugh! Tedious.