Wading into the murky waters of Niben Bay I could see what seemed to be the vaguely stony shapes of man-made structures. There was only one way to be sure I was at the right place so I dove into the water and began to swim deeper. Sure enough, it seemed to be a ruin just as I had seen in my vision the night before. I swam to the surface for a fresh breath of air and then dove down to what appeared to be the submerged entrance of the ruin’s inner chambers. After breaching the doorway and swimming another 15 feet or so I climbed out into a dry section of the temple ruins. I explored the musty passages until reaching a lower level, which seemed to be much more intact, and soon I stumbled across the dust coated skeleton of a long dead adventurer. Searching his body I found several interesting items including an odd signet ring and an old, barely held together journal. I decided then that this would be a good to rest and catch my breath. 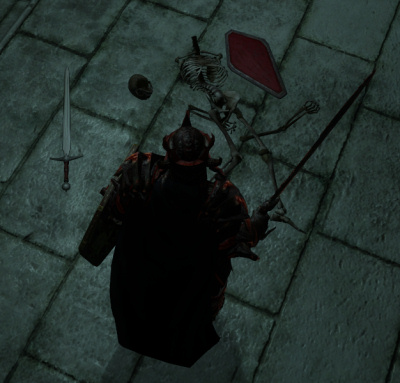 “On second thought, maybe I *won’t* join the Knights of the Nine.”

The journal was written by a knight named Sir Amiel and detailed how he once belonged to an order called the Knights of the Nine who were devoted to recovering and safeguarding the various relics of the Pelinal Whitestrake, referred to by Sir Amiel as the Crusader’s Relics. He mentioned that the order had possession of several of these holy relics before it eventually disbanded due to strife within its ranks. The relics scattered to the individual knights who had originally recovered them. He also mentioned that in his old age, still dedicated to the cause of the Knights of the Nine, he had journeyed there, to the Shrine of the Crusader, in an attempt to recover the Helm of the Crusader. Perhaps most intriguingly of all, he wrote that the ring could be used to unlock a hidden underground chamber in the order’s old priory that housed their last remaining relic, the Cuirass of the Crusader. It occurred to me immediately that if I could find this priory and it had somehow escaped being raised by bandits by then my quest for Whitestrake’s relics would be well on its way. I first had the matter of the Helm to attend to. 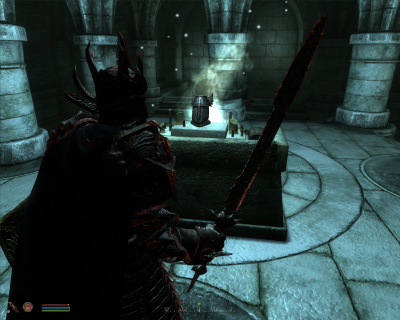 As I ventured further and further into the ruins of the shrine it became apparent that, as with many ancient ruins, this one was haunted by undead. I fought my way through the various passages and chambers until I finally breached a small side passage that lead to the shrine itself: the Helm of the Crusader was still there, intact and unguarded. I carefully took up the relic and hastily made my way out of the ruins and back to my horse. It was time to find this ruined priory of Sir Amiel’s! 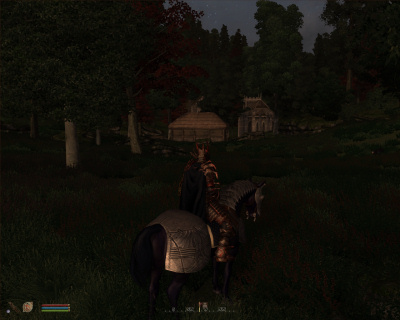 “Finding the Priory. It’s a bit of a fixer-upper.”

After some time spent researching this Knights of the Nine order at the Arcane University’s library I soon had a foggy idea of where the Priory of the Nine was located, a spot I had stumbled upon early in my post-prison adventures in fact, and set off for the forests of the West Weald. It took quite a few days of searching but eventually I discovered a small compound nestled against a hill in a particularly secluded part of the forest. The priory compound consisted of a chapel, a large house, and a few miscellaneous out buildings including a stable. Exploring the vaguely familiar abandoned main house I found it to be as relatively intact as I recalled. While I had no doubt that it had been looted clean long ago I saw no sign that the basement area had ever been discovered never mind actually breached. Using the ring in the spot mentioned in Sir Amiel’s journal caused plumes of dust to shoot into the air as a complex mechanism lowered a section of the floor into stairs leading down to a basement door. The basement itself was standard fair for a house like this though there was a heavy door on one of the walls. Using the ring to activate the unlocking mechanism revealed another large room that no longer appeared to be under the main house of the priory at all. I was fascinated. I cautiously explored a bit of this room, which appeared to be a crypt, until I spotted an armor stand that held what was doubtlessly the holy relic itself. 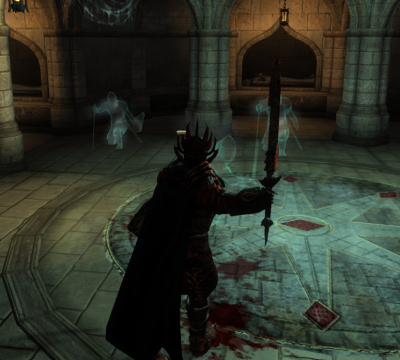 “Hitting ghosts with a sword is actually harder than you might think.”

I approached the relic to examine it but was startled to have the spirit of a knight materialize before me to block my path. As it paused to regard me several more such spirits surrounded me to form a circle. The lead apparition then announced that even in death the original Knights of the Nine would protect the last of their sacred artifacts and that each would face me in honorable combat. Now, I had vanquished many spirits before, and a great many warriors, but the ghosts of some of that era’s greatest knights? I truly did not know what to expect of this. I drew my Daedric longsword and lifted my shield for battle. One at a time he called them up to face me. Sir Henrik, Sir Caius, Sir Torolf, and so on. While each of the spirits fought well, some better than others, none of them could best me in martial combat. At last it was the lead knight’s turn and though our duel lasted a longer time it too bowed before me in defeat. I had bested the challenge and the Cuirass of the Crusader was mine. 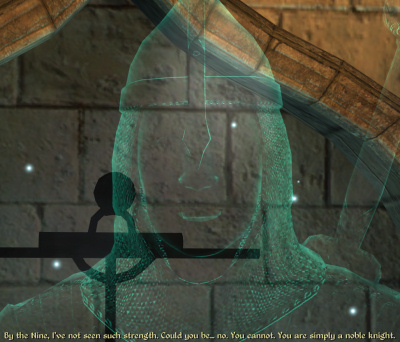 I carefully gathered the relic and began to put it into one of my bags while keeping a careful eye on the ghostly knights behind me, yet they did not leave. Much to my surprise, in fact, they re-took their places and stood at attention. The lead spirit then turned to congratulate me on my victory and to announce that they were at my service on my search for the remaining relics. I don’t know if they simply assumed that my purpose was just or if they somehow knew of and trusted something deeper inside of me, but they were seemingly at my disposal, with the spirits soon each providing me with priceless information about where the other relics had been lost and how I might recover them. With two of the artifacts at hand and a what seemed like most of the information I’d need to find the rest, this quest had turned from one I accepted with curiosity and skepticism to one that not only I wanted to finish, but it seemed like I might finish quite easily.