Wasting no time I set off to Chorrol where the spirit of Sir Casimir told me I’d find the holy Gauntlets of the Crusader. The Chapel of Stendarr in the west end of the city was where Sir Casimir had been when he was cursed by the gods for his misdeeds, causing the gauntlets to slip from his hands and remain, forever immovable. In the chapel I discovered the Gauntlets just as the spirit claimed. I spoke to a priest there, Areldur, who told me more of the popular folklore surrounding the now celebrated artifact. Unexpectedly, he also told me that an ancestor of Sir Casimir’s had made a pilgrimage to the chapel recently and suggested I speak with him down in the chapel hall. 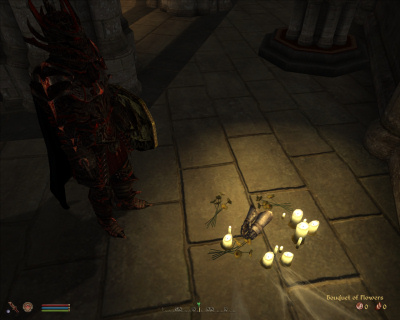 “I wonder what other mundane possessions of Pelinal Whitestrake are now holy relics?”

Kellen was a sickly and miserable man who had come to Chorrol to learn more about the relic in an attempt to free himself from the pains of his ancestor’s curse. At first I could not fathom what I could do to help. I had well practiced and powerful magics to cure the sick and heal wounds but I could not possibly undo a curse of a god. That is, not without help from the god. I spoke more to the priest Areldur who, showing some considerable guilt, confessed that he indeed knew of a way to free Kellen but had not thought to sacrifice himself to perform it. I was taught a holy spell that could absorb such afflictions and with some assistance from Areldur I was able to free Kellen from his undeserved fate. The only problem was that I now carried Sir Casimir’s curse. I was stronger than Kellen and, though it weakened me considerable, could endure it. When I returned to the site of the artifact I discovered that my sacrifice had won me favor with Stendarr and I could now pick up the Gauntlets of the Crusader. A crowd gathered to see me wearing the gauntlets and cheer me as I departed through the city gates. It seemed like this quest of mine stood a chance of greatly increasing my renown throughout Cyrodiil but I was so focused on my goal I spent little time pondering the ramifications.

Next I journeyed to the west of the Imperial City to a hidden shrine to Kynareth that lay deep in the Great Forest. Sir Juncan fell before he could complete his quest so his spirit had little to tell me about what recovering the artifact might entail. I arrived at the shrine in the dead of the night but Avita Vesnia, a priestess of Kynareth, stood by vigilantly regardless. To my surprise she knew well of the relic I sought and, without any hesitation, directed me to a place she called the Grove of Trials in order to test my worthiness before the goddess. I planted a torch in the ground for light and stood with my sword and shield at the ready, not knowing what to expect. 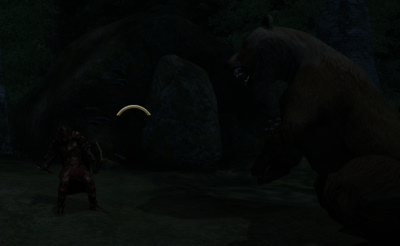 Suddenly I heard the quickening footsteps of a charging creature bearing down upon me. When I turned I saw the most incredibly massive bear I had ever encountered. Luckily I was able to raise my shield before it could maul me. Thinking quickly, I devised a plan to roll away from the bear and wedge myself between some boulders that rested on the edge of the grove. As long as my shield could hold out I could give myself some much needed time to come up with a better strategy. Before I knew it the bear ceased its attack. Confused, I slowly dropped my shield to find the bear calmly walking away from me. Of course! Kynareth was the goddess of the elements and therefore maintained a powerful bond with nature. Had I attempted to strike down the bear I would have no doubt failed in my test, or perhaps worse. Avita soon approached and directed me to a small hidden cave wherein I found the relic, the Boots of the Crusader, safely waiting for me. 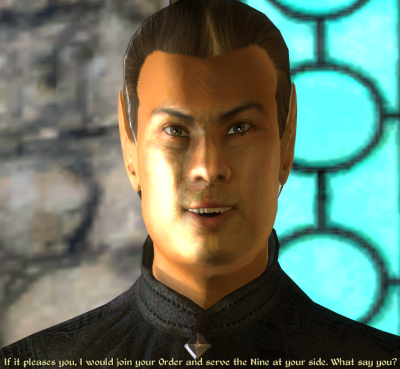 “Sure, but try to look a little less happy about it, will ya?”

I returned to the Imperial City to rest and restock on supplies before returning to the Priory of the Nine to gather more information on the remaining relics. While there was no crowd to see me leaving Kynareth’s shrine, I was greeted by several people, including the priest Areldur from Chorrol, who had all heard of or been a part of my mounting success in the quest to retrieve the Crusader’s Relics and wished to join the reformed Knights of the Nine. I had not specifically sought to reestablish the order but I supposed that I could always use more assistance and, besides, someone would need to safeguard these holy artifacts after I was done with them. I set my new recruits to the task of attempting to clean and repair the old priory as well as recruiting craftsmen to help us with restocking the armories. This would be a suitable base of operations while I continued my quest for the relics of the Crusader.

The spirit of Sir Henrick told me of how he set out on his own to continue the search after the Knights of the Nine had collapsed. He was successful in recovering the Shield of the Crusader but rather than using the relic he and his men set out to safeguard it. Although he died before the renovations to the old fort were complete, Sir Henrick did at least know where it was located and soon I was on my way to the ruins of a Fort Bulwark near the Black Marsh border. 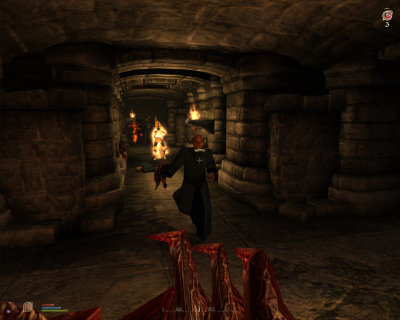 “Just when I was starting to miss killing mages….”

Even as I approached Fort Bulwark from afar there were signs that the site was occupied. I slew two mages who attempted to attack me on sight outside on the crumbling battlements and cautiously entered the ruins. Upon accessing the more intact lower levels of the fortress I discovered the passageways lit with the flicking light of freshly fueled torches. Sir Henrick had implied that he and his followers had planned for special defenses for the old fort and soon enough I discovered them: Traps lay in various intersections, deadly (though now unmanned) choke-points divided sections of the structure, and clever mechanisms such as mechanical drawbridges were placed to slow would-be invaders. This was far from the first trap filled ruin I had explored but these designs were devious indeed. Still, it seemed that the current group seeking to recover the long lost Shield of the Crusader were not your run of the mill treasure hunters and tomb looters and had already bypassed most of these obstacles. This, I discovered from some journals near one of their camps, was a group of rogue mages and conjurers. While I didn’t know their purpose in trying to recover the artifact it was clear from their violent demeanor they weren’t exactly holy men attempting to honor the Nine. As evident, I encountered a Sir Thedret locked away in a make shift dungeon they had constructed. Upon releasing him he told me how they had tortured him for information on the relic and were planning on executing him soon if he hadn’t cooperated. 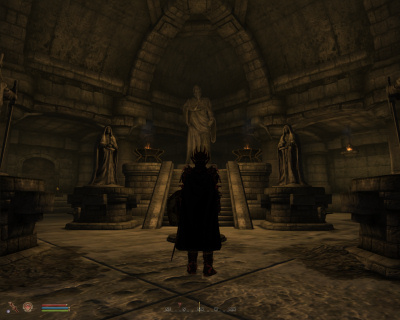 “Paying my respects at a shrine to Julianos.”

Able to catch many of these mages unaware, I easily killed them. It was the last two secrets that challenged me and were indeed a tribute to Julianos, the god of knowledge and logic, in their cleverness. Eventually I succeeded unlocking the long unseen shrine that held the artifact and carried the powerful shield away to the next site. 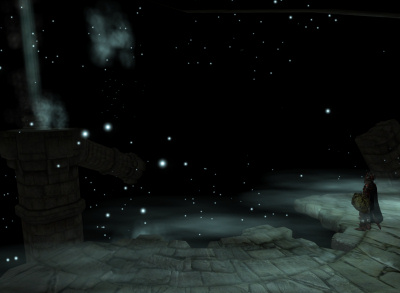 The Chapel of Zenithar in Leyawiin held the tomb of Saint Kaladas in its undercroft. The spirit of Sir Ralvas swore that the chosen few of those who would pray before the shrine would be given a vision. This vision was a test of faith, a gaping chasm that could only be crossed by those free of doubt. Some of the holiest crusaders in history, including Sir Ralvas himself, had attempted this challenge many times and failed. Indeed, when I arrived in Leyawiin I met Carodus Oholin, a warrior who had come to test his faith previous to my arrival and who had decided to stay to help protect the artifact. Thankfully, the rumors of the reestablishment of the Knights of the Nine were spreading and he eagerly let me pass without so much as an unkind word. In the undercroft I was granted a vision and in that vision I strode across the chasm, floating high above a void filled only with darkness, and picked up the Mace of Zenithar on the other side. 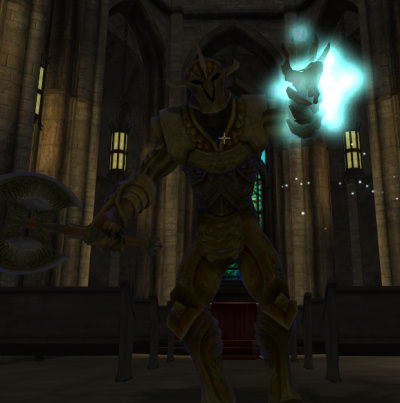 “Aurorans all up in my shit.”

All was not to be so effortless, however. When I returned from my vision and back into the main chapel I found Carodus Oholin and others besieged by heavily armored Daedra the priests called Aurorans. Servants of Umaril, they claimed, they Daedra seemed intent on stopping the relics from being assembled. It was a vicious battle and I regret that we could not stop the Aurorans from harming everyone in the chapel. Several died and several more wounded. Carodus Oholin, who was both greatly offended by the attack and impressed by my success in recovery of the artifact, vowed to return to the priory with me to join the order. We left Leyawiin with great haste not knowing what else Umaril the Unfeathered might have planned for those that might stand in his way.