Upon reaching the Priory of the Nine we were greeted by Lathon, squire to Sir Roderic, the knight who I had encountered in the original pilgrimage I embarked on after first meeting the Prophet. After I sent Carodus to begin his initiation Lathon told me of the grave news regarding Sir Roderic. Sir Roderic had completed his pilgrimage and begun his own quest for the relics. After a vision in which he saw the corruption of Sir Berich he sought out the traitorous knight’s tomb in the wildness to the southwest of Bruma. Although he and Lathon were able to recover the Greaves of the Crusader, Sir Roderic was slain by Sir Berich’s wraith, who Lathon swore was wielding the legendary Sword of the Crusader itself. Thankfully Lathon was able to escape with the greaves and handed them over to the order’s possession. 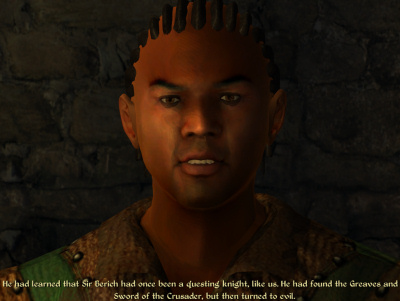 “Lathon reveals my next task.”

With Lathon’s information I knew where next I was to travel. I equipped the now completed set of relic armor and gathered the few knights who were at the priory to announce that a pivotal moment was now upon our order: we knew where the last of the Crusader’s Relics was located and what we must do retrieve it. I then dispatched riders to recall the rest of the knights as well as to attempt to locate the Prophet before setting off north with Lathon as my guide.

The seasoned squire lead me to Underpall Cave which, at first, seemed like any other cave around Cyrodiil that was large enough to be inhabited by humans. Once I reached the main chamber, however, there was some kind of a ruined fortress built into the back half of the cave which, I had properly imagined, was built far back into the rest of the cave system. The keep itself was large and maze like and infested with all manner of undead. The structure took me quite some time to fully explore and I slew and turned many a foe but eventually I located what seemed to be the last and largest chamber of the system. It was a cavernous room filled with stalactites and stalagmites with a small underground lake occupying the bulk of the space. The thick scent of the musty air was almost choking and my meager torch did little to illuminate the massive room around me but this was the least pressing of my concerns. 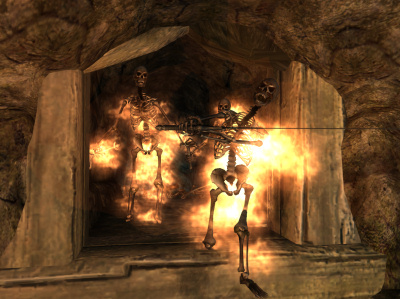 Shortly after stepping into the room the shade of a spectral warrior materialized. I dropped my torch and drew my Daedric longsword but then another appeared. As I engaged the first spirit yet another appeared over my shoulder. Soon I was completely surrounded by these ghostly warriors, each raising a weapon and coming at me with vicious ferocity. The aggressive attacks of this company of specters had me pinned into a corner in short order. I was holding my own with blade and spell but I had to frequently cause diversions that would give me enough time to heal myself. After cutting through about most of the apparitions I spotted what I knew had to be Sir Berich’s corrupted wraith watching me from afar. Suspecting that it might be controlling some if not all of the spectral warriors I sent an arc of lightning cracking at it. The hit seemed effective but not enough to take down the wraith alone. 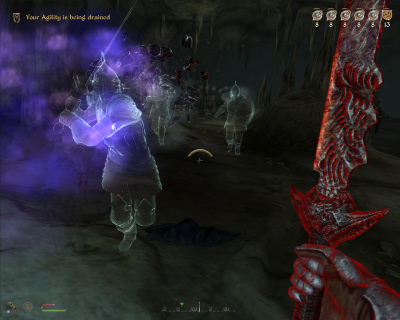 Soon I had exhausted my arcane energies and found myself having to resort to martial combat alone. More troubling, I had to fumble through my vials of healing potions several times to keep my wounds from overwhelming me. Thankfully the Crusader’s Relics proved a powerful defense with their numerous ancient blessings and enchantments. Eventually I employed a tactic of luring as many of the remaining spirits as I could into a side chamber to finish them off one at a time with sword, shield, and a little trickery. When I emerged back into the main cavern I found the wraith waiting for me again, the corrupted Sword of the Crusader glowing angrily in its hand. I raised my longsword to my eyes and began the duel. With my other enemies gone the wraith was no match and soon I had the last relic in hand. Before leaving I returned to fetch Lathon so that we could recover Sir Roderic’s body for a proper burial. 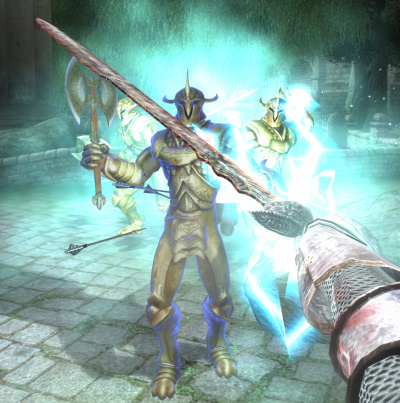 “We don’t tolerate your kind ’round these parts!”

Back at the priory my brothers and I gathered around the tainted sword and debated how best to restore it. It was soon decided that we should attempt to reconsecrate the relic at the Chapel of Arkay in Cheydinhal. I chose to go alone as to not draw further suspicion to my cause. The trip to Cheydinhal was quick and uneventful, yet swinging open the door to the chapel I discovered another group of armored Aurorans in the middle of the now familiar process of desecrating the chapel and slaying anyone who would stand in their way. I managed to put down two of the Daedra though several others chased after a fleeing priestess and ran out into the city where several of the city guard joined the fray. A chaotic melee soon broke out in the Cheydinhal streets but the Aurorans were defeated by our combined efforts and surprisingly without anyone dying, though some chapel goers were quite seriously injured. Back in the chapel I placed the sword on the alter and, still somewhat of a skeptic in the power of the divines, asked Arkay to purify the relic. A strange glow swept over the sword and though I couldn’t say how I could tell that the blade had been changed. 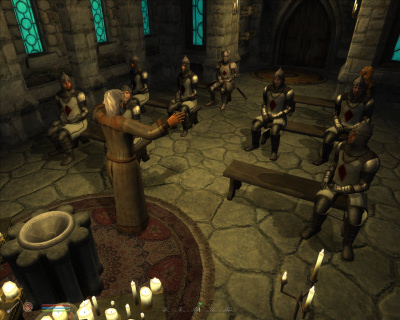 When I returned to the priory I was met by Sir Thedret who told me that the Prophet had made his way there and that the rest of the order was assembling in the priory’s chapel to hear him speak. As we entered the chapel he had already started giving a sermon to the newly reformed Knights of the Nine. After the sermon concluded The Prophet spoke to me in private. He congratulated me on completing my quest and told me that my victory now was nearly certain providing I could pass the next challenge before me – if I could slay Umaril in the physical word he could arm me with the relic of the ninth divine, the blessing of Talos, which would allow me to travel into the realm of Oblivion and destroy the Unfeathered’s spiritual form and end his pack with the Daedric lords one and for all.

This actually turned out to be one of the more difficult quests in the game for me despite having a fully decked out character by this point.

The fight at the Underpall Reflecting Pool section was about 200 times more dramatic than I described it thanks in large part to the fact the Obscuro’s Oblivion Overhaul made that particular room home to the necromancer lord Fayth Noor meaning I had to fight not one but TWO bosses and their minions at the same time. To make matters worse Fayth Noor silenced me almost immediately and his horde of Spectral Reavers ganged up on me and beat the ever loving hell out of me.

Afterwards, when the Aurorans were attacking the Chapel of Arkay I actually had to reload several times so that I could concentrate my attacks on them in such a way as to keep them from running rampant all over Cheydinhal, murdering random NPCs that I’d prefer not to be dead for the rest of the game. Ugh…