After informing my most trusted knights that I was embarking on a new, crucial, and for now, totally secret quest, I packed my saddlebags in preparation for potentially spending a very long time living back out on the land and rode out of the West Weald and north towards Chorrol. Sticking mostly to the roads the journey was uneventful and Chorrol seemed more or less exactly as I had last left it. Weynon Priory resembled the Knight’s own compound save for its far less remote location, sitting just outside the city walls and along a main road. A monk that was tending the gardens greeted me and directed me to the main house of the priory. I entered and found Brother Jauffre sitting at his desk scratching on some parchment. 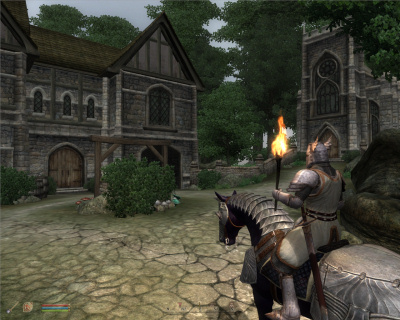 Jauffre seemed unfamiliar with my garb or my name and, probably mistaking me of some young knight-errant looking for his next quest, was all business when it came to addressing me. I most definitely captured his full attention when I told him that Baurus had sent me to him and that I knew he was in fact the Grandmaster of the Order of the Blades and not just a simple monk of the Order of Talos. His demeanor changed even more dramatically when I revealed the Amulet of the Kings to him – he demanded to know more about how I acquired the relic and what I knew of the Emperor’s assassination. Having carried the burden of my tale for so long it was a relief to finally tell someone what I knew. Carefully listening to my story, Jauffre seemed to let his guard down and believe that I was indeed there to help rather than to further sully the reputation of the empire with blackmail or extortion. 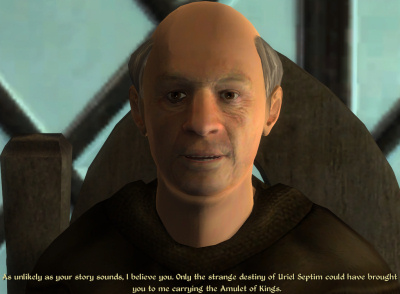 “Err, okay? You really don’t believe me do you?”

Feeling fairly confident that I could trust him, I let lose the last, scandalous detail of that infamous day: the Emperor’s mention of an heir to the throne. Jauffre seemed less phased than I had expected with this news. He told me that he in fact knew of the potential for such an heir to exist, as he had seen to an illegitimate child when he was much younger and assigned as one of the Emperor’s personal bodyguards. As he explained it seemed to dawn on him how important that detail was given the political state of the empire and, it seemed, rumors concerning this would-be heir’s last location, Kvatch. That boy, now a man, was known to the Blades to be a priest in the Chapel of Akatosh there.

The Blades had been largely de-activated in the wake of the assassination, with those few remaining active members mostly working on investigating the assassination and occasionally detailed to guarding members of the Elder Council. It would take some time for Jauffre to rally them. He asked me, upon my honor as a knight, to journey to Kvatch and escort the heir, Martin, back with me to the safety of the priory while drawing as little attention us as possible. It had to be done. 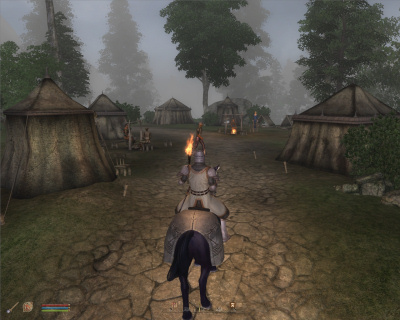 “Hm, your city is slightly less impressive than I remembered.”

I had been hearing rumors regarding the city of Kvatch for quite a long time. At first there were tales of attacks in the city, some said bandits had been openly challenging the city guard while others reported demons patrolling the alleyways at night. Regardless, it was enough to cause many of the citizens to eventually flee and with that the rumors shifted to a plague outbreak within the city walls. In any case I had almost totally avoided the city since escaping my cell. When I started up the road to its main gate I was shocked to find it lined by a tents in some sort of a makeshift refugee camp. The tattered population of the camp spoke in incoherent ramblings about Daedra attacking and burning their homes but mostly overwhelmingly referred me to Savlian Matius, the guard who was heading up the defense of the city.

Upon riding hastily further up the road I could see that their ramblings were more sensible than first believed – great plums of smoke flowed up from behind the crumbling city walls and some sort of massive, pulsating portal stood menacingly directly in front of the city gates. A small contingent of city guard barricaded themselves with bow and sword at the ready directly in front of me. Bodies, rubble, and fire littered the small field in between. 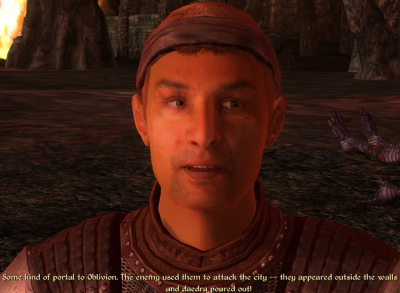 “An Oblivion Gate you say?!”

At first, as if by reaction alone, Savlian warned me off, telling me to return the encampment. It was only after a double-take, noting my armor and weapons, that he began to explain the scene before us. Apparently the citizens had been reporting more and more random sightings of Dremora, evidently scouting the city, sometimes leading to confrontations with citizens and city watch. Months of these events steadily escalated, culminating in great gateways to Oblivion opening up and legions of Daedra pouring into the city indiscriminately killing and burning. Savlian was confused about how Daedra were able to invade our realm in such a way, and even more confused about why they could be targeting Kvatch in particular. I had my suspicions as likely did Jauffre. 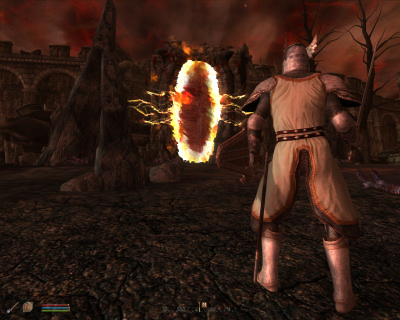 “Taking in this *incredibly rare* sight.”

Savlian knew of the priest, Martin, and believed that he was last sighted still alive inside the city. Unfortunately there was no easy way into the city while this great portal sat active in our way. He told me that he had seen other such gates close during the initial attack so he believed this one could be closed somehow too and had sent a small contingent of his men in earlier to investigate. Much to his disbelief without a second thought I volunteered to join them in this mission and set off towards the portal, sword in hand. 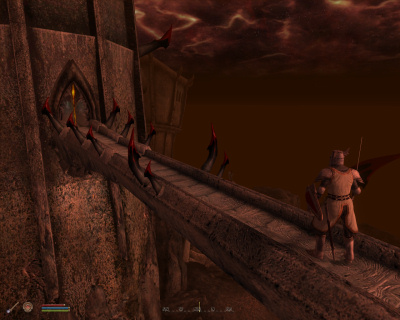 Immediately upon stepping through the portal I found myself in a desolate land of fire and smoke, unlike anything I had ever seen before in all of Cyrodiil. Besides the strange plants and the blood red sky, this world was filled with massive cliffs of great shattered boulders and impassable seas of flame. Barely perceivable, nestled amongst the chaos, were traces of crude roads, bridges, gates, and other signs of civilization. I spotted the most impressive of these structures, a massive tower jetting up on the horizon, and made reaching it my goal. Along the way I was attacked at various times by patrolling Dremora soliders along with other Daedric creatures but given that the Daedra clearly weren’t anticipating an incursion of their own they never came at me in numbers that made them difficult to defeat. 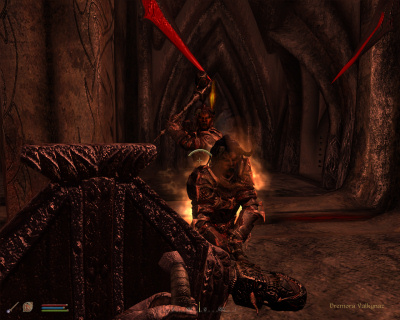 “Odd being on the receiving end of a Dremora attack for once.”

Arriving at the base of tower and entering I found fierce resistance from the Dremora who manned this place. With the power of my crusader’s artifacts I was able to cut through my foes and climb my way up the tower all the same. In one of the tower’s chambers I found Menien Goneld, evidently one of the Kvatch guardsmen Savlian had sent in earlier, being tortured for a Dremora warrior’s depraved amusement. After a brief confrontation Menien told me that the Dremora I just killed was in fact the “Sigil Keeper” of the tower and with his keys I could access the Sigil Stone at the top of the structure which he believed was what powered the portal. Setting the man free I continued on my way. 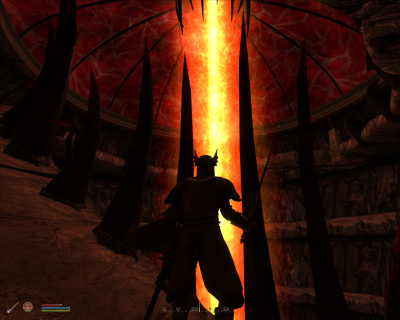 “On my way up to the Sigil Stone.”

Breaching the fortified Sigil Keep at the top of the tower and slaying its occupants I took the risk of betting on Menien and his men’s hard earned information and reached into the powerful energy beam that shot through the great tower, pulling out the Sigil Stone. After a brief moment of violent quaking which threatened to shake apart the entire structure I found myself, with the blink of an eye, back outside of the main gate of Kvatch – the Oblivion portal was gone! Savlian and his men rushed to welcome me back will all manner of questions about what lay on the other side of the portal and the fate of their fellow guardsmen. I was relieved but my task was not yet close to completion. 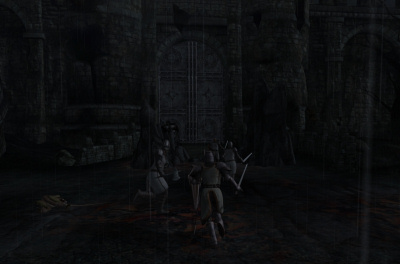 I told Savlian that we had no time to rest – that I must get into the city and find Martin. Savlian needed no convincing as he was eager to get back into the city himself and soon we were all charging into the city’s ruined plaza, summarily dispatching anything of Daedric origin we spotted. Hard fights, all, but with minimal casualties we pushed our way through the burning streets and into the chapel. It seemed that the chapel had served as some sort of a gathering point for refugees and we were greeted by a few more Kvatch guards and dozens of survivors that had holed up there. After escorting them to the relative safety of the camp beyond the city walls, we pushed our way all the way to the castle, and while we saved many more lives and dispatched many more Daedra, we were too late for Ormellius Goldwine, the Count of Kvatch. Savlian and his men had much work to do to finish securing the remnants of the city. I left them to it. 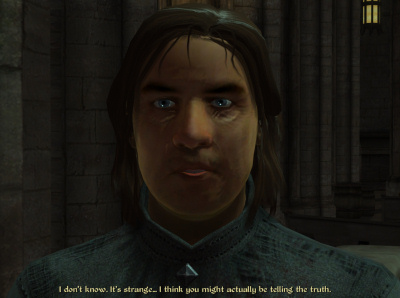 “So apparently all of these NPCs just think I’m full of shit?”

Back with the refugees I identified Martin and pulled him to the side where our conversation could not be easily overheard. Exhausted from the previous fights I made no effort to mince words and told him exactly why I was there. Martin was, of course, incredibly confused but, given what he knew of his own mysterious past, he somehow didn’t seem to dismiss the notion of being Uriel Septim VII’s heir outright. Instead, having little left for him in Kvatch, he agreed to journey with me back to Weynon Priory to at least hear Jauffre out. One of the guards who had fought alongside me found Martin a horse and soon we were on our way back to Chorrol.