It’s been quite a while since I’ve sat down and played a single player game from start to finish. You know, insert “life” blah blah blah, and my other usual excuses. I’ve continued to play around with the console versions of Tropico 4 and Diablo III and even dipped back into World of Warcraft briefly enough to finally give Warlords of Draenor a fair shake.

Anyway, with all of the recent hype surrounding Star Wars: The Force Awakens in the last couple of months I found myself in the mood to revisit some of my favorite old Star Wars related games. At some point this turned into wanting to play some of the Star Wars games I missed, most notably the GameCube’s Rogue Squadron II: Rogue Leader and Rogue Squadron III: Rebel Strike. This urge coincided nicely with having an entire day off of work with no other plans. Unfortunately I couldn’t find copies of either game locally so I ended up going into my own collection and dusting off a copy of Star Wars: The Force Unleashed II. 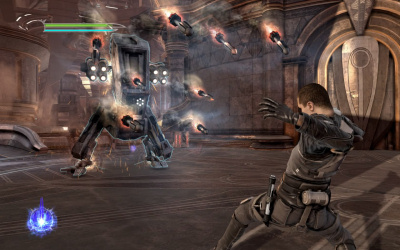 I was skeptical about the first Force Unleashed but ended up enjoying it overall. Still, I never played the DLC and had totally resigned myself to skipping the second game after seeing it get totally panned by both critics and fans alike. Still, a few positive reviews including one from a co-worker of mine convinced my to toss a cheap, used copy of the Xbox 360 version into my backlog.

So, there I was, a day off of work and an apparently incredibly short (with many people claiming to beat it in about 4.5 hours) Star Wars game queued up to play. So…?

What can I say? Suprisingly, I actually really enjoyed TFU2 and I’ve got to say that right off the bat that it definitely doesn’t deserve its place among those “worst Star Wars games ever created” lists I sometimes see it on.

First, TFU2 dials up the already nice graphics and sound from the first game just a bit, particularly when it comes to the pre-rendered cutscenes. This game will have Star Wars nerds salivating with its aesthetics, for sure. I absolutely cannot complain here – I was impressed. 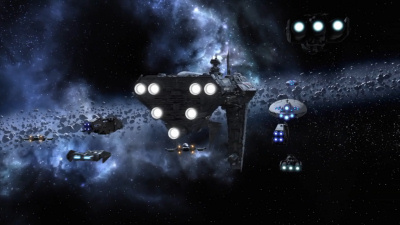 “The rebel fleet running away, as usual.”

Now, TFU2 plays almost exactly like the first game. The systems have been polished a bit to the point that I don’t really recall running into the issue with accidentally targeting the wrong enemies or objects with force powers that apparently aggravated me a lot during my playthrough of the first game, which is great. Also, this time you start with most of your force powers unlocked and spend the first several levels more or less owning the faces off of all of your enemies without much of a challenge. This I like! Of course, there was a point at which I seemed to hit a bit of a sudden shift in difficulty, with some boss fights and even some normal set pieces being quite challenging. Unlike the first game’s reliance on enemies that were immune to certain attacks (which are here as well but seemingly less prominent) TFU2 seems to delight in challenging the player by simply filling a single area with a large amount of different, averagely difficult enemies at one time. I think this became most noticeable after the introduction of those damn terror droids and the later terror walker boss. Ugh! 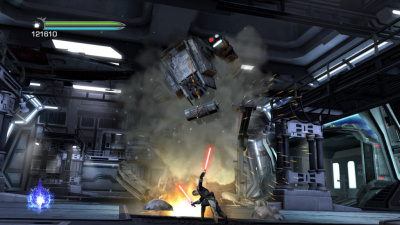 “Bringing down an AT-ST.”

At around the same point in the game the polish gets noticeably turned down just a notch, with environments and puzzles getting more repetitive and checkpoints seemingly placed with less of a generous hand, meaning repeating larger chunks of gameplay and even character dialog upon dying. Oh, and platforming sections – did I mentioned platforming sections? Still, overall the game was a fairly smooth ride and despite TFU2’s reputation for being unfinished and buggy, I actually ran into zero bugs during the main campaign.

The story was one of the things critics panned the most. Yes, there isn’t much substance to it. It’s entirely throwaway, in fact, and it doesn’t fit cleanly into the canon (err, I guess “legends” now!) Still, I remember watching at least one review video that panned the plot for being all about Starkiller‘s emo clone desperately and hopelessly chasing after a woman for no real reason like the plot of some lame 80s teen movie. It definitely looked silly the way it was presented but it turns out that this was largely creative editing. In reality, Starkiller’s clone is understandably emotional and unstable and attempts to flee the empire’s control. His obsession with Juno came across as a desperate grasp towards one of his only remaining, shared memories and not some kind of unrequited crush. I had no real problems with it. 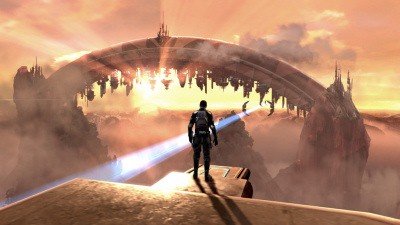 “Enjoying the view on Cato Neimoidia.”

Despite choosing the lightside ending of the first game, which resulted in Starkiller fucking up both Vader and the emperor, but ultimately dying as a martyr to the fledgling rebellion, knowing how inconsequential Starkiller’s clone was in TFU2 inspired me to strike down Lord Vader which led to a pretty surprisingly result that lead perfectly into my playthrough of the Battle for Endor DLC mission. I gave myself an appropriately dark side looking costume, my trusty old red lightsabers, and headed to Endor with bad, bad intentions.

The Endor DLC was a lot of fun. First, it added some much needed variety to the scenery of the main game – the lush jungles of the forest moon of Endor, of course. It also added two new enemies in the form of rebel troops of various types and, of course, motherfucking Ewoks! Both of these could be surprisingly annoying foes, but brutalizing Ewoks en masse kind of made any difficulty in these sections totally worth it. I especially enjoyed the special grapple attack move which performs some kind of hilarious force punt to the poor little bastards. Also, and this has been spoiled long, long ago so I don’t feel bad by saying so, and it’s totally non-canon in ANY version of the Star Wars universe, but Starkiller’s clone manages to brutally execute both the dynamic duo of Chewbacca and Han Solo AND the inexplicably badass-Jedi version of Princess Leia. Awesome. The end was a little confusing and, ultimately a cliff hanger for I assume further DLC that unfortunately never came out. 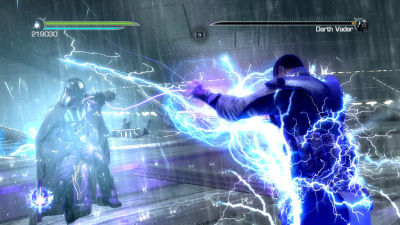 “Getting all Darth Sidious on Vader’s ass!”

Overall, despite the occasional frustrating fight, repetitive sections, and the throwaway story, Star Wars: The Force Unleashed II was a quick, fun playthrough that I’d recommend for any Star Wars fan who can distance themselves enough from the canon to have a little dark side fun or who enjoyed the first game enough to want more of the same. Just don’t go in looking for anything long or with an engrossing story…

PC screenshots plundered from sources throughout the galaxy by the Knights of Ren.