Somehow I never played Monolith’s F.E.A.R. First Encounter Assault Recon despite being super into PC games, especially online first person shooters, right around the time it came out. In fact I specifically remember a couple of my old Planetside clanmates playing the online only “F.E.A.R. Combat” pretty hardcore for a time. I suppose I was too into military and sci-fi shooters and snubbed F.E.A.R. for it’s whole supernatural/horror angle, which is odd since F.E.A.R. has arguably more in common with military and sci-fi shooters than most games, but I honestly don’t recall my exact rationale at the time.

Fast forward to 2009 when F.E.A.R. 2: Project Origin was released and somehow it really caught my attention. Some of my friends evidently picked up on that and got me a copy for the Xbox 360 version for my birthday after it had very quickly hit the bargain bins despite generally favorable reviews. You guys know me and my massive backlog by now though, right? Yeah, I never played it though it has been in my “play this” stack since then. Several years later I was aimlessly wandering around in a random consignment store when I happened across a lone copy of the first F.E.A.R. game for Xbox 360 still shrinkwrapped for under 10 bucks. I hadn’t really planned on playing it on the 360 since I was more familiar with it as a PC game, but I figured what the hell and picked it up. 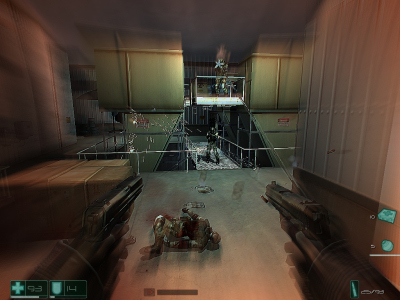 “John Woo’ing out with a slow-mo powered firefight.”

Given that F.E.A.R. and F.E.A.R. 2 are both relatively short single player experiences and, apart from a few excursions into some really old games it feels like it has been ages since I played a traditional-ish first person shooter, I decided to bump them up on my backlog.

F.E.A.R. First Encounter Assault Recon (ugh, that acronym!) has you cast as the newest member of a secret special operations group tasked with confronting supernatural threats. Imagine if Fox Mulder had his own, dedicated SEAL Team at his disposal and you’re not too far off. As the newbie to the squad you’re of course assigned to be the point man, you know, the guy who gets to scout ahead in front of the rest of the team by himself. I like to imagine that this is some sort of elaborate vetting process by which only the very strongest new F.E.A.R. recruits survive being pelted with anvils by angry poltergeists over and over again to be promoted to full-time members of the team. I mean, none of the other characters in the game seem to think there’s anything all too unusual about sending “the new guy” out to investigate a small army of heavily armed clone soldiers and mech suits lead by a physic cannibal, armed only with a submachine gun and an inability to speak. I digress… 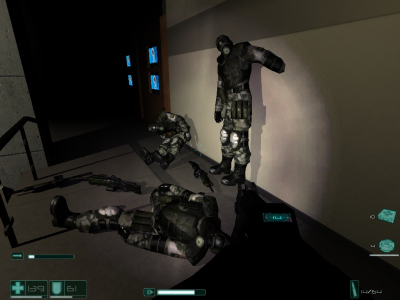 “Remember back when nail guns were a thing in games?”

While F.E.A.R.’s mechanics feel more than a little aged to me, remembering 2005 rather fondly it’s easy for me to imagine how this game’s take on Rainbow 6 like semi-realistic first person tactics coupled with a unique enemy AI was actually probably a small but important stepping stone in the evolution of the FPS genre. The noticeably not-completely-linear design of the levels and the occasional focus on gimmicky feeling Half Life 2 style physics puzzles and scripted events were a little jarring to me. Being able to slow down time is neat though, and the Monolith guys went kind of crazy with the destructible objects and particle effects to make an already cool looking effect look totally fucking awesome. From what I’ve seen these effects are a little more subdued in the Xbox 360 version I played, but even there they were eye catching and intense at times, especially against the often incredibly dark spaces in the game. Seriously, this has to be one of the darkest games I’ve played since Doom 3 or perhaps Chronicles of Riddick: Escape from Butcher Bay. Unfortunately the rest of the presentation is a little lacking – environments are mostly empty with far too little variation over the course of the campaign. It feels like I spent half of the damn game in the same office building but come to think of it, maybe I did?

So you’re exploring these extremely dark, often repeated factory corridors, office spaces, and warehouses taking out these clone soldiers who do all kinds of wacky flanking and just generally don’t seem to behave like most FPS foes, when all of the sudden the face of a mutilated corpse flashes on your screen and all of the shit on the shelf you just looted for ammo comes flying off behind you. *gulp* Then you walk a little bit further when all of the sudden you swear you just saw a creepy ghost child in the corner of the room as you swept your flashlight across it, but now your flashlight’s batteries are drained. It’s not until after you empty your entire magazine into said corner that your flashlight is finally charged up again and you can verify that you were, in fact, just shooting at nothing like a total idiot. Ahh, that’s where the horror stuff comes in! Neat. 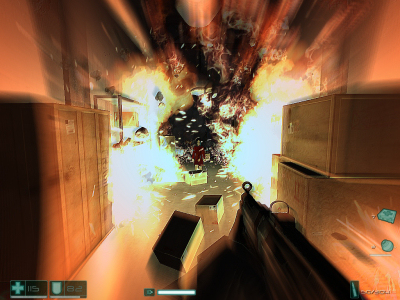 “Alma fucking with me… again.”

Honestly, while at first I was a little anxious as I made my way through the levels I suppose I got so used to that tension that I found myself pretty much unphased by the vast majority of the jump scares and other horror elements the game threw at me. It wasn’t until the very last chapter that I felt truly creeped out and even that probably had more to do with the fact that I knew the plot reaching its climax than all of the freaky ghost shit that was going down. One nod I’ll gladly give the game in regards to creating an atmosphere of “horror” though, is to the soundtrack. Wow, what a fucking soundtrack! Dark, foreboding, atmospheric? Its rare that a game soundtrack stands out to me while I’m playing it but this one certainly made an impression.

So did I like it? Eh, yes. Probably not nearly as much as I would have liked it back in 2005, but like I implied, it at least feels like a relic of its time that, along with something like Half Life 2, can easily be enjoyed in a vacuum for what it is. The good parts of the game (the sometimes frantic, sometimes almost tactical gunplay against interesting enemy AIs, the dark, spooky soundtrack, and the other weird horror stuff, mostly) didn’t elevate it beyond that for me, but they do have me very curious to finally play F.E.A.R. 2 next.

Oh hey, speaking of short single player experiences! I also noticed that Telltale released The Walking Dead: Michonne and I immediately hopped on that, and I just wrapped up the third and final episode. This is probably the first time I’ve ever played a Telltale game’s episodes as they were released and while I probably still prefer playing them back to back, overall it was a cool way to digest a campaign. 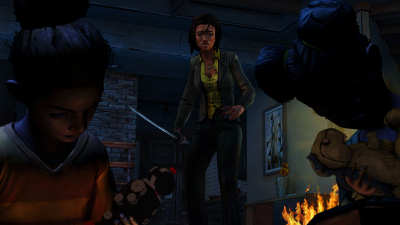 Now, I liked The Walking Dead quite a bit, and The Walking Dead Season 2 maybe even more so, and by and large this Michonne centered spin-off is largely the same quality. Good writing, a cool graphic novel inspired aesthetic, excellent voice acting, and interesting choices. It was short and didn’t necessarily go anywhere too interesting, especially considering how little time we’re given to invest anything in most of the new characters we meet in the game, but it was still a fun little side-story and shed some interesting light on Michonne’s past. It almost felt like an expanded take on the style of side stories we got with the 400 Days bonus episode from the first season in that respect.

That said, I have to say ONCE AGAIN, that Telltale REALLY needs to scrap their aging engine. Maybe this has to do with playing the Xbox 360 build of the game rather than a version for a more modern platform, but this has to be the jankiest of Telltale’s games yet: freezing, major hitching, audio desynchronization and muting… bah! The otherwise polished presentation of the game was utterly let down by this piece of shit engine, especially as action heavy as the Walking Dead games can sometimes be. Again, I’m sure playing this on the now positively ancient Xbox 360 probably didn’t help, but I’ve played much better looking games that ran silky smooth so I can’t really excuse it. I mean, if they didn’t want to put the time into making the game AT LEAST reasonably presentable on the system then they shouldn’t have bothered releasing it on it at all. I’m hoping when I go back and play The Wolf Amongst Us and the Game of Thrones game soon they won’t have quite the same level of problems as this poor game has.

If you’re playing it on one of the current consoles or, better yet, PC, and liked the previous Telltale Walking Dead games I’d say it’s an easy recommendation.