My return to Cloud Ruler Temple was soon met with disappointment as Martin learned of my failure to retrieve the Amulet of Kings. He was utterly shocked, however, when I presented him with the Mysterium Xarxes instead. Martin had made a few veiled allusions to having dabbled in Daedra worship before becoming a priest of Akatosh but his reaction, a combination of intrigue and fear, seem to confirm everything. The intrigue evidently won out as Martin carefully took the tome into possession.

Martin revealed that while I was gone he had studied my copies of the Mythic Dawn Commentaries for more clues on our attackers. He suspected that when Mankar Camoran fled the Mythic Dawn ceremony he returned to the paradise he referred to so much in his writings. Paradise, he suspected, was an actual, physical place, likely in a plane of Oblivion itself. With an artifact as powerful as the Mysterium Xarxes in his possession it was hard to say what Mankar Camoran could have accomplished. Perhaps we could use the Mysterium Xarxes to aid us in stopping the Mythic Dawn? Research would be slow, however, so I left Martin to it and returned to Jauffre for my next mission. 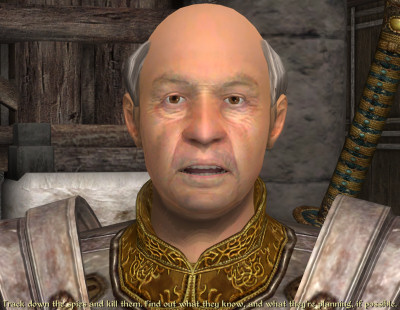 “Well, that was unusually straight forward.”

Jauffre told me of a couple of suspected Mythic Dawn agents who had been spotted numerous times on the road near the temple recently, likely spying on our activities. With the rest of the Blades busy guarding the temple walls or assigned to Martin, he dispatched me to attempt to track these spies down. Captain Steffan added that he had seen them around the runestone near the bottom of the road at around dusk the previous day and suspected I might find them there again.

Setting off down the mountain I found no trace of the spies neither on the road nor near the runestone. My next course of action was to speak to the Bruma city guard to see if they had any suspicions. Captain Burd in the Great Hall couldn’t think of anyone new who had come to the city nor anyone else he could reasonably point a finger towards. He did seem to recall that a Redguard woman named Jearl had just recently come back from a trip, however. Being my only lead, I decided to give Jearl a visit. 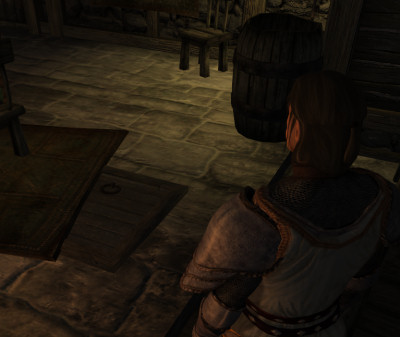 “I guess not all spies are masters of concealment.”

I found Jearl’s house, a modest timber home in the Nord inspired style typical of the city, nestled near the city wall in the south side. It seemed that Jearl herself wasn’t at home, however. Deciding that time was of the essence I quickly picked the lock and slipped in. Doing my best to move with utmost stealth I searched through anything that could possibly contain even the smallest hint at some sort of Daedric association. At first it seemed that Jearl’s home was as unassuming on the inside as it was from the outside but with the discovery of a trap door leading to a basement carelessly hidden beneath a rug my investigation took a hard turn.

The basement contained a few very big clues – as if copies of a couple of the volumes of the Mythic Dawn Commentaries weren’t enough I found an extremely revealing letter from Ruma Camoran with details on Jearl’s mission there too. Jearl was to perform reconnaissance on Cloud Ruler Temple in preparation for the cult’s pending attack on Bruma and, ultimately, Martin Septim. This new information was too crucial to wait and I immediately abandoned my attempts to remain undetected and left the house, riding back towards Cloud Ruler Temple. 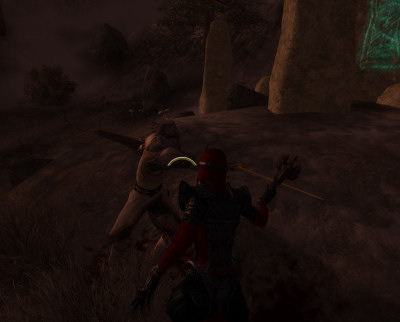 “Showdown at the Bruma runestone!”

Riding within view of the great runestone outside of the city walls a shadowy figure caught my eye. It was nearing dusk by this point so I drew my horse that direction to see if this could be one of the Mythic Dawn spies. Before even reaching the runestone I saw the figure consumed by a flash of burning orange and red flame and reappear in the Mythic Dawn’s crimson cloaked armor. I’d been spotted. Leaping from my horse and drawing my blade I narrowly dodged a lightning bolt as I swung around to face the cultist. The second Mythic Dawn spy had also joined the fray, both tossing offensive spells at me and taking wild swings with their maces. I had hoped to take these agents alive but their zealous fervor gave me little choice but to defend myself and soon I stood victorious, both cultists laying dead.

Jauffre was pleased with the results in any case, and immediately set off with a small retinue of Blades to warn the Countess of Bruma about the Mythic Dawn’s plans. I spoke to Martin again to see if he’d made any progress with the Mysterium Xarxes. Martin believed that with the power of the Mysterium Xarxes he could indeed open a portal to Camoran’s paradise, but he would need four items to perform the ritual. So far, the only one of these he’d deciphered was the blood of a Daedra lord. It goes without saying that I couldn’t fathom how I could come across such a thing but when Martin suggested that practically all of the legendary Daedric artifacts that had found their way to Tamriel were created with the essence of a Daedric lord, and therefore should suffice, I hatched a plan. 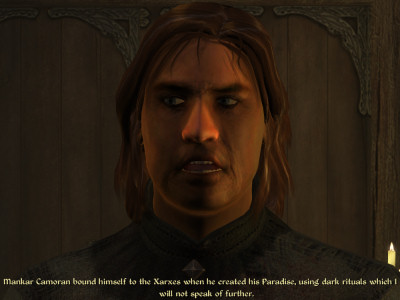 “*proceeds to speak at length about the dark ritual*”

Despite my own study of the arts of conjuration I had steered fairly clear of direct contact with the Daedric princes or their worshipers. Daedric magic was well known to corrupt and besides, Daedra worship had been outlawed in the Empire and I wasn’t eager to find myself in a cell again. Conjuring Daedric creators and items was risky enough. Still, I had always made mental note of my encounters with anything Daedric. One of the first things I had recalled upon listening to Martin’s theories was talk amongst the Anvil Fighter’s Guild about a shrine to the Daedric lord Malacath north of the city. There were widespread rumors that worshipers who made offerings at Daedric shrines were occasionally granted favors by the Daedric princes so perhaps I could find Malacath in a generous mood. I prepared for the long journey back to the Gold Coast.

The conditions around Cyrodiil were worse than I had suspected. Oblivion portals had been opening seemingly randomly throughout the countryside all over the realm, with all manner of Daedra spilling out to raise any sign of civilization they encountered. Many small villages and settlements had been sacked and set ablaze, with those in other areas living in constant fear of a similar fate. Bands of town guards, Imperial Legionnaires, and mercenaries alike banded together to hunt the invaders or, in some case, to defend themselves from being hunted. I could spare little time to help, however, and rode onto Anvil. After a brief rest and a warm meal I located Prince Malacath’s shrine. 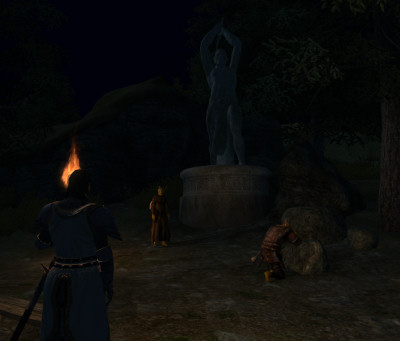 I found the small shrine nestled in the hills north of Anvil, surprisingly close to the city, actually. Not so surprisingly, the Orcs who attended the shrine were highly suspicious of my motives. Still, after some coaxing one of them suggested an offering of troll fat and soon I was surprised to find that I had successfully summoned the attention of what seemed to be the Daedric lord himself. Not unlike the Orcs who favored him, Malacath was gruff and harsh in tone and wasted little time on pleasantries or small talk. Instead he demanded I do something for him. He wanted to free some Ogres (“his Ogres”) who had been enslaved by a local landowner, Lord Drad. This seemed like a reasonable enough request if it could possibly reward me with an artifact of Daedric origin. 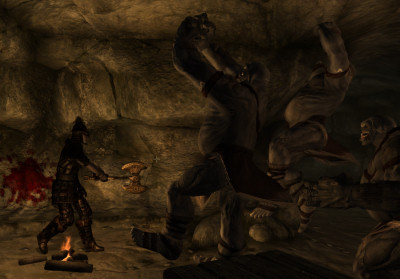 “This guy is probably rethinking his chosen profession about now.”

I found Lord Drad’s estate with ease but when I confronted him about his Ogre slaves he rudely insisted I mind my own business. His wife was a little more sympathetic to the plight of these Ogre slaves and let slip that Drad had them working a small mine on his property. After making my leave I located the mine on the edge of the estate and snuck, unseen, past the door and past the guards. Deeper into the mine I finally located several groups of captive Ogres chained to the walls, smashing stones with their bare fists. A barbaric fate even for brutish Ogres. I slashed off each of Ogre’s shackles as well as the locks on the gates to their cells. The Ogres wasted no time seeking revenge against Lord Drad’s guards, furiously rampaging through the mine. The guards stood little chance. Keeping my distance I followed the Ogres out of the mine and parted ways with them as they continued their rampage onto Lord Drad’s estate.

Back at the shrine Prince Malacath was quite pleased with my success, laughing heartily at the thought of Lord Drad’s fate. He asked me to hold out my arms and soon I found them burdened by the weight of a massive magic warhammer he called Volendrung. Hoping that this would suffice for our ritual I bid the Daedric Prince farewell and prayed to the Nine that he had no knowledge or concern about the Mythic Dawn cult and their plots on Nirn.