Bedding down by my camp fire on the first night of my journey back east to Cloud Ruler Temple I’ve found myself admiring the fine Dwarven craftsmanship of Volendrung. I’m sure if this ancient weapon could speak it would have quite a story about how it came to be owned by a Daedric Prince. I’m mildly irritated at Prince Malacath rewarding with me with such a massive and heavy artifact when I have so far to travel to bring it back to Martin. If it were almost any other Daedric Prince I might suspect it was strictly for their amusement.

I’ve made it much further east now, almost halfway across the province. I’m quite disheartened by the increasing amount of Oblivion portals appearing, seemingly randomly throughout the land. The few travelers I’ve encountered on the roads are calling this the Oblivion Crisis and believe it is only going to get worse. Judging from the many gifts and offerings I’ve been given by pilgrims traveling to far off churches and shrines it would seem that people believe the Nine are Tamriel’s only hope. From what I’ve seen they might be right. 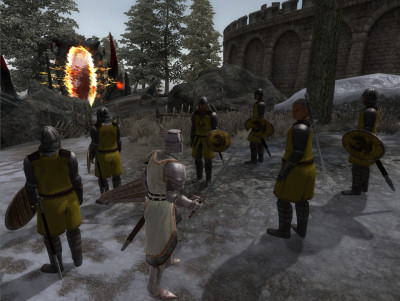 “Preparing to assault the Bruma gate.”

I’ve arrived at Cloud Ruler Temple and presented Volendrung to Martin. At first he was skeptical about its Daedric properties but when I told him its name he appeared to be familiar with it and seemed satisfied that it would suffice. Martin made it a point not to ask me what I had to do to obtain such an item, probably fearing that I took part in some depraved scheme. Even though Prince Malacath’s request was relatively benign and I’m sure Martin would agree that Lord Drad’s fate, whatever it might have been, was a price worth paying for the greater good of Cyrodiil, I’m keeping the tale of Malacath’s Ogres to myself for now.

Jauffre sends word that an Oblivion gate has opened up outside of the Bruma city walls and requests that I meet Captain Burd of the Bruma guard to lead them into the portal, showing them how they’re closed. While I’m far from an expert on Mehrunes Dagon’s realms, my reputation has apparently been bolstered greatly by my victory at Kvatch. I’m happy to help Bruma’s men with knowledge and experience that could ultimately foil the Mythic Dawn’s plans, but I know it will not be done without much bloodshed. 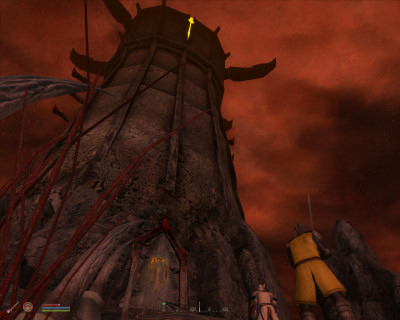 “Captain Burd stares up in amazement at the sigil tower.”

As I feared, several of Bruma’s city guard have fallen. Some outside of the portal trying to clear a way from invading Daedra for Captain Burd’s retinue to enter the gate, and most of Captain Burd’s retinue itself once inside the portal. Still, the captain himself was able to stay with me despite a grievous injury early into the journey to the portal’s sigil tower. Together we fought against all manner of lesser Daedra, including a large number of fearsome Dremora warriors and Xivilai mages. The fighting in this portal is some of the toughest I’ve faced yet – if we survive this Oblivion Crisis it will not be without much loss of life. We were successful in closing the portal. Burd will be training all of his men on how to navigate the scarred landscapes and how to operate the unusual mechanisms of Mehrunes Dagon’s siege towers.

Jauffre is pleased with the results of my training with the Bruma guard but agrees with me that our most fearsome foes, such as the veteran Dremora I encountered in the portal outside of Bruma, have yet to emerge from Oblivion, and when they march in force our small militias of city guards, mercenaries, and adventurers will be hard pressed to stop them. He requests that I visit the Imperial City and each of the other major cities in Cyrodiil to try to obtain more soldiers to reinforce Bruma’s numbers. Knowing that the biggest strikes will be on Bruma, a decisive victory there could help set the pace for the upcoming war. With my experience traveling around the entirety of Cyrodiil in recent months and my stations in the guilds we both agree that I’m the perfect person to take up this task, though I don’t have relationships with too many of the Council members or Counts. I’ll surely think of some way to help convince them to lend Bruma a hand. It is in their own best interest, after all. 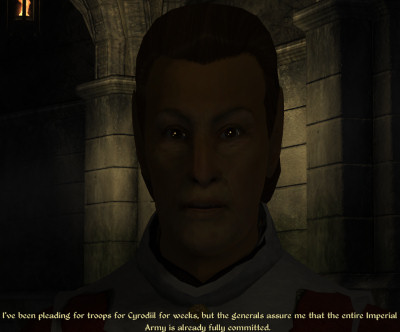 “No help from the Legion? Time to build our own.”

My first stop along this journey is a disappointment. I managed to meet with the High Chancellor himself but despite what seemed like a large amount of interest in our cause Ocato says he can spare none of his legions as they’re more than occupied with the Daedric invasion in other provinces. I have no reason to doubt his claims, I just hope I have more luck with the Counts.

I had decided to travel east to Cheydinhal to meet with Count Andel Indarys. The Count is quick to deny my request, citing the Oblivion gate that had appeared outside of Cheydinhal as his top priority, and that all his men would be needed to defend the city against it. He notes that his son, Farwil, has taken some knights and entered the portal and suggests I might lend a hand. The guards at the portal spin a different tale than the Count’s and suggested that Farwil and his Knights of the Thorn are young and foolish and are almost certainly in way over their heads. I figure this could be a great opportunity to help the Count and the rest of Cheydinhal, perhaps giving the Count pause to reconsider sending troops to Bruma. 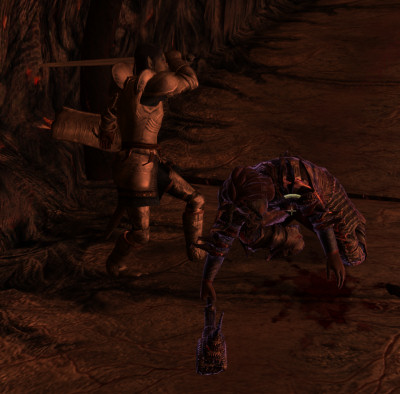 I stepped into Oblivion and almost immediately discovered the corpse of one of the young knights, clad in decorative steel armor, lying near the portal. I’ll need to make haste rather than move through this desolate landscape at my typical, more methodical pace. I could see the massive sigil tower looming in the distance but as I approached it I could see a valley open up before me, with a path twisting and winding down across the entire cave-pocked face of the hill. I’ve decided to save time by climbing down instead of following the paths and caves to the bottom. This may be quite difficult in my armor but should save me huge amounts of time. Wish me luck.

I reached the bottom of the huge valley where a huge stone bridge leads to the sigil tower, sitting in a sea of flame and find Farwil and one of his knights huddled together, nursing some minor wounds, and planning their next move. Another dead knight lay nearby. Farwil is rejuvenated by my greeting, instantly pledging to follow me into the tower so that we can defeat more of the Daedra who had killed his brothers. I attempt to talk him out of it but he and his man won’t have any of it. Inside the tower we’ve fought more foes than I can recall. Soon Farwil’s companion lay dead and Farwil himself has sustained further injuries. I’m trying to do the lionshare of the fighting, but Farwil is nothing if not foolishly brave and keeps rushing in to aid me even against unfavorable odds. Farwil and I have done it, we’ve slain the sigil keeper and shut down the siege portal, finding ourselves back outside of the walls of Cheydinhal surrounded by surprised guards. Farwil is eager to inform the Count. 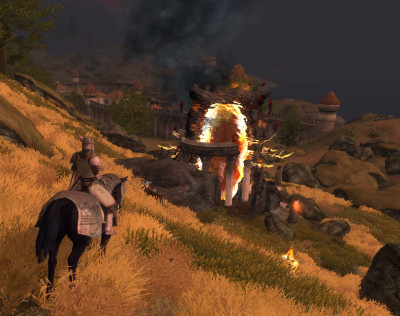 “Anvil during the crisis.”

Count Indarys is overjoyed that I was able to save his son and close the Oblivion gate, so much so that he is going to pledge some of his men to help defend Bruma after all. Not only that, but he even rewarded me with a magical sword from the Cheydinhal armory that they call Thornblade. These were perhaps my hardest battles yet and my earlier thoughts about the extreme threat of these invaders now rings even more true – we’ll need to act quickly to stop this invasion before it truly begins. Perhaps I can convince more of the cities to focus on the bigger picture by helping to close Oblivion gates around their lands as well. I’ll attempt this tactic when I journey south to Leyawiin next.

I’ve just secured a small contingent of troops from Leyawiin. As I predicted Count Marius Caro was uncooperative when I initially petitioned him but changed his tune entirely after I closed two gateways nearby the city walls. As before, they were difficult fights. I had brought some of the Knights of Nine with me this time, which both helped me in my efforts and also helped to train them on fighting Daedra and storming the sigil towers. After a few more of these Oblivion gate battles I will dispatch the order to begin the task of helping to close the more dangerous around Cyrodiil. I’ll also attempt to lobby my guilds to lend whatever help they can to the cause as well. 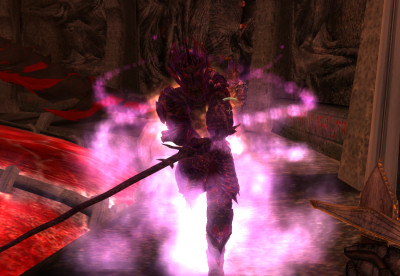 “Climbing the tower, one Markynaz at a time.”

As with Leyawiin, another hard fight, and another Oblivion gate left burning in ruin outside of the walls of Bravil. Count Regulus Terentius was surprisingly helpful and is sending his captain of guard, Captain Lerus, and her personal cadre along to Bruma. Another small victory. I’m immediately continuing West.

The story was much the same with Skingrad. I decided to close the Oblivion gate near Castle Skingrad before ever confronting Count Hassildor. Having previously worked with him to defeat the necromancers who were attempting to infiltrate the Mage’s Guild, I expected a good response from the count. Still, arriving after already removing the immediate threat from his city guaranteed that the count will indeed send some of his guard to reinforce Bruma. 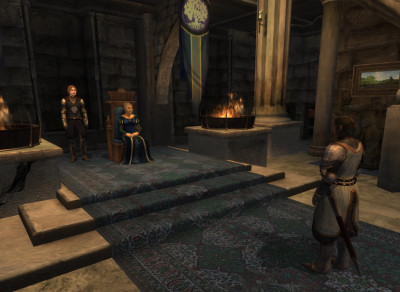 As I write this update I’ve just left Kvatch and I am surprised the report that Kvatch has volunteered to send aid as well. Maybe I shouldn’t be so surprised, as Savlian Matius knows as well as anyone the dangers these Oblivion gates pose. I will journey to the coast to consult with the Count and Countess of Anvil next.

With much effort, closing a total of three more of these infernal portals, I’ve secured more troops from both Anvil and Chorrol. Without being able to secure more men from the Imperial Legion and us not having the luxury of time to visit other provinces, this is as good as it will get. I hope its enough. I’ll continue on to the Jerall Mountains at sunrise tomorrow to learn what Jauffre thinks our next move in countering Mehrunes Dagon’s pawns should be.