Ahhh, F.E.A.R. 2. As I mentioned in my F.E.A.R. First Encounter Assault Recon overview back in May, F.E.A.R. 2: Project Origin was what really drew me into to finally getting into the series. I thought it looked awesome, with its semi-forced first person perspective and much more detailed environments. When I started to research more about the F.E.A.R. series I was surprised to find that most of its fans didn’t view Project Origin all that positively, and even those that did often still regarded the first game as superior. After completing F.E.A.R. 2 I think I actually agree. 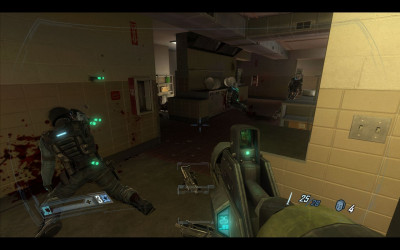 After playing the first game I was still quite skeptical about its supposed superiority over its sequel, after all it left a lot of room for improvement and F.E.A.R. 2 seemed to address a lot of those issues. Well it does indeed address them. First of all, it certainly looks good, with a more detailed, modern art style and improved animation. The story, for what it’s worth being mostly a retelling of the first game’s already confusing plot, is told with much better presentation overall. Also the environments are way less repetitive and monotonous which is a well known criticism of the first game. Unfortunately, for the most part, these improvements only serve to raise the game to the level of “average.” That is, while the environments might not be repetitive anymore, they’re also not that much more interesting or engaging. In some way, that actually makes them LESS interesting than those in its predecessor. 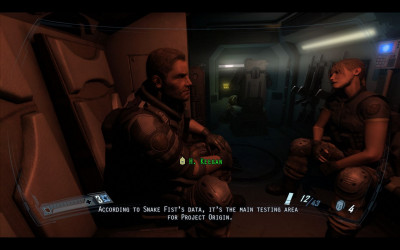 “Your squad, who your character is still inexplicably splitting up from constantly.”

That’s kind of the story of the game, really. Many things seemed to get lost in translation to this new engine. The lauded gunplay of the first games doesn’t “feel” quite as good. For the first third or so of my playthrough I was actually actively underwhelmed by it. I eventually settled on my two favorite guns and got used to them, warming up to the game overall, but for a while I was considering not even finishing it. The unique AI from the first game feels stripped down and while the enemies still do cool things on occasion it’s not quite as noticeable or dynamic. I did like the addition of iron sights on guns and ability to “cook” grenades (despite killing myself an embarrassing number of times from cooking them for too long.) Oh, and the slow motion power is still awesome and those mech stages? Sweet.

One oddity about the combat is that I sometimes found myself pining for a cover system of some sort. Perhaps F.E.A.R. 2’s nod to newer style cover mechanics (by being able to flip and move objects to use as cover) also included some additional tuning to encourage cover use, for one the engagement distances were often quite a bit longer than the almost exclusively close quarters fights of the first game, but without a good, ACTUAL cover system I felt overly exposed almost all of the time. Even the ability to lean would be a welcome return. *sigh* I did like the way the health and armor system worked though, keeping me in a near constant state of walking the line between having a good supply of armor and health packs and being moments away from death. 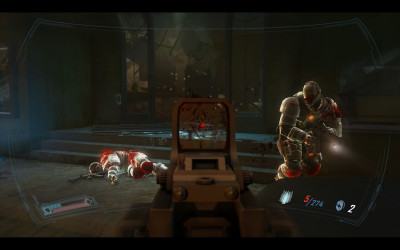 Something else that gets lost along the way are the horror elements. Yes, they’re still there, and no, they aren’t terrible, but just felt a little “by the numbers”. I was happy that I had a flashlight that stayed on and that the environments weren’t pitch fucking black, but the jump scares and Alma scenes were mostly total misses for me. Perhaps the fact that the levels were so much more linear and much more consistently paced than in the first game meant that those scenes were more expected when they showed up. Oh, and I also found F.E.A.R. 2’s soundtrack to be totally unremarkable, which is a huge letdown given how surprisingly great the creepy soundtrack of the first game was. 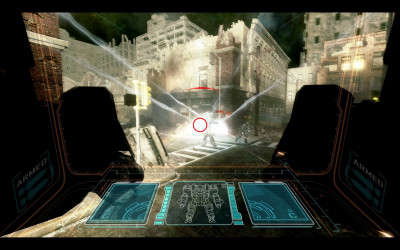 “Time for a brief MechWarrior break.”

F.E.A.R. 2 is still a fun, well made shooter, and by the time I completed the game I had warmed up to it a bit and was even tempted to try the well reviewed but (somehow still) overpriced expansion DLC. I guess my overall take is that the improvements are largely only skin deep and do very little to advance the series in any meaningful way. I’m glad I played it, but after just playing its somehow more captivating predecessor it just didn’t hook me quite as well as I hoped it might. I almost feel that if the best parts of both games could somehow combine together you might have an absolutely stellar game. F.E.A.R. 3, perhaps? Apparently not. The reviews of that one ensure that I’ll be giving it a miss entirely, unfortunately.

(As an aside, the tomes and tomes of PDA text that attempted to further flesh out the fiction really surprised me. I can’t believe anyone thought this was a good idea. They TOTALLY ruin the pacing, and I’m not sure what would compel me to have to stop and stand there reading these dry “intel” texts every few minutes instead of trying to complete my mission.)