Directly following the completion of the massively dragged out “Garn” Oblivion campaign I’ve decided to do a quick postmortem wrap up to answer some of the questions that have been asked over the years and just take a quick, general look back over it all.

First, the name Garn. A lot of people have wanted to know where I got it. A few have commented on it sounding kind of dumb and/or not fitting the character.

You’re totally right. I actually came up with the name several years previous when I decided to try playing an Alliance character in World of Warcraft for the first time. Specifically, I wanted to try the prototypical human Paladin. I always thought human males looked dumb as hell in WoW, and still do for the most part, so I gave him a name I thought sounded appropriately dumb and harsh, like something Conan’s less-known knucklehead brother might have. My decision to use that name in Oblivion was fairly random. This Garn was also “human” and the name was appropriately fantasy-ish so it seemed like an okay fit. I admit at that time I had little idea of what my character’s… err, character would be like. What a different series this would have been if I had played him as just a beefy, dumb fighter. Maybe next time? 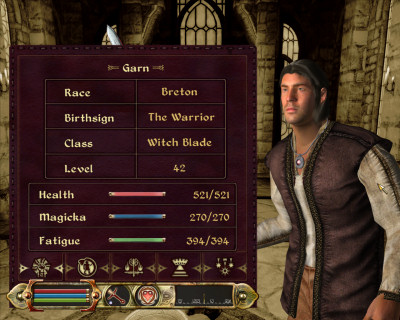 “Not actually anything to do with witches.”
What is Garn’s x?

Some people have been curious about the particulars of the character, since I rarely talked about the specifics of the game systems during the campaign. All shall now be revealed!

Notable Accomplishments:
Days Passed: 199
Quests Completed: 118
Skill Increases: 675
Training Sessions: 80
Fame: 144
Infamy: 0 – What little infamy I had I would have cleared while doing my Knights of the Nine routine.
Days Jailed: 0
Items Stolen: 1054 – I can’t imagine how I racked up so many.
Items Pickpocketed: 0
Assaults: 58
Murders: 0
Largest Bounty: 40
Creatures Killed: 1902
People Killed: 845
Locks Picked: 441
Souls Trapped: 0 – I didn’t do any soul trapping at all with this character, surprisingly.
Potions Made: 215 – Surprised it was this many. I didn’t do much Alchemy with Garn.
Oblivion Gates Shut: 9 – The bare minimum to advance the plot + Allies for Bruma.
Horses Owned: 1 – Really? I always avoided getting my horse killed and only really ever replaced if I had to.
Houses Owned: 2 – In addition to my Imperial City shack I also acquired but never used the awesome Benirus Manor in Anvil.
Books Read: 236
Skill Books Read: 15
Artifacts Found: 2 – I got the Skeleton Key to save myself the frustration of constantly hording and breaking lock picks, and of course the artifact needed to complete the main quest.
Hours Slept: 225
Hours Waited: 1369 – I waited more than I slept, huh! The waiting mechanic is crucial for saving time.
Nirnroots Found: 114

Gold on hand: 342,662 although I hadn’t sold most of my loot since starting the main quest, and of the little of it I took with me a lot of it was worth a fair amount (magic weapons and armor, mostly.) I also horded almost every piece of magical weapon or armor that fit my class in my Imperial City shack for the first half or more of the campaign. Probably quite a lot of money tied up in there.

I played on default / medium difficulty for more or less the entire campaign. At first this was quite hard thanks to OOO’s rebalancing. For most of the middle and end of the story I found it laughably easy to slaughter my opponents. At the end, going through the main quest line, a lot of the Daedric enemies were actually pretty tough. I ended up bumping the difficulty slider down a tiny bit just to make clearing out Oblivion gates less of a grind.

The story arc/plot of the series? Why didn’t you do x questline?

At first I had only a vague idea that I might do normal quests and write about those, and not coming up with any other great hook early on, that is definitely how things developed. Soon I found myself needing to consider what order I’d play the questlines in for some sort of narrative coherency. The final product is fairly close to what I had imagined with the only difference being that I had originally planned for Garn to be sidelined by evil (an excuse to do the Thieves Guild, Dark Brotherhood, and Daedric questlines) and him doing the Knights of the Nine questline in order to repent. With things taking so long and some conflicting thoughts about exactly how I’d pull off the whole redemption thing, I decided to skip those questlines altogether.

How many hours did you play?!

Naturally it didn’t actually take me more than 9 years to play Oblivion – it’s not that long. According to my last save, almost 122 hours on the nose. I only played a session or two a month, with each session usually being somewhere in the neighborhood of a few hours. There were definitely segments where my post didn’t really reflect how long I had played but for the most part I feel like my time playing is pretty well represented by my writing. I would have loved to play much more often but I found having to write about my adventures before proceeding on to be a big stumbling point. In fact, I wanted to play so much more than I was playing that I actually ended up running through an entirely separate campaign with a different character on the Xbox 360 version of the game back in 2013. I also 100% Fallout 3 during that time as well.

Err, that’s hard to say. I’d definitely say that The Elder Scrolls is my favorite RPG series ever. I love the immersive nature of the world and the more and more I learn about it I absolutely love the lore behind the series. In fact I’ll be playing through Arena soon in one of my Retro Reviews, hopefully.

What mods are you using?

People have certainly noticed that I’m not playing 100% vanilla Oblivion. While I’ve found a few other mods I would have loved to incorporate into the campaign (this one for example, which adds active Imperial Legion forts across the continent) I decided to keep my add-on list static after starting the campaign for the sake of stability. Getting Oblivion mods, particularly complicated ones like OOO, to play together can sometimes be difficult. My setup is fairly solid.

Here they are, and the load order (tuned with Oblivion Mod Manager):

One of the sillier challenges I had during the course of the series was that I didn’t want to migrate this setup to over another PC and risk breaking anything. While there were other reasons, that was one of the excuses I used for not updating my main gaming PC for way, waaay too long. I had built just before I started this campaign. Yeah, it was definitely time to upgrade… 😉

What did you do to take your screenshots?

Nothing too special. I used FRAPS and set it to repeat shots every 2 seconds. A lot of my action shots are achieved by playing normally but occasionally going into third person, plus a huge amount of simple luck. This didn’t always work for me though as sometimes I wouldn’t end up with anything useful after an otherwise awesome encounter. My fight with Mankar Camoran is a great example of that – no great pictures of the fight with Mankcar himself. Beyond that I often purposely framed nice shots using third person view and, more and more often as the campaign progressed, started using the toggle free camera (TFC) console command for the sake of variety.

Things you learned from the series / what you’d do differently next time?

First of all, I learned that writing is hard. Despite not being particularly good at it I absolutely love to write. The problem is that I’m goddamn slow, and I usually have trouble finding the time and the motivation to sit down and write something out, revise it multiple times, sift through my screenshots, etc. This was the main reason this whole project took so long – I’d play for a few hours and then I’d have to come up with the time to pen my adventure before having another session. This was especially frustrating after a great session that got me all amped up to play more.

I found it quite difficult to keep my perspectives consistent with such spread out writing sessions. I ended up purposely experimenting with this for my own benefit which is where the different “From Garn’s recollections” and “From the journal of Garn” subheadings came from. I found it ESPECIALLY difficult to keep my tenses straight when writing something so long and spread out which I admit I don’t have any good excuses for. I guess I won’t ever end up writing my Great American Novel after all… 😉

Directly related, the final format I used for this “Let’s Play” was a bit ridiculous. I would have been far better off writing a more detailed account of a much shorter adventure OR a much less detailed account of something this size or even larger. The next few of these I do will be much shorter form, whatever format those end up being, for the sake of my sanity.

Finally, a little less mechanical, I learned a ton about the lore behind the Elder Scrolls series and a lot about the TES community in general. I actually wish I had sought out more sources than the various wikis and whatnot beforehand as I might have been a little better prepared to make my fiction fit into the canon from the get go. I’d have to say that the various TES related subs on Reddit, including /r/TESLore were especially influential later on into this series.

Living in Oblivion – Nondrick’s Non-adventure was a great, less serious, inspiration for starting this originally.
The Elder Scrolls Subreddit and related subs were excellent resources, especially for learning about the lore.
The Unofficial Elder Scrolls Pages (UESP) was my main reference when planning my sessions and writing up my adventures.
The Imperial Library also a nice place for referencing the script and in-game books.

That’s about it for Garn! I’ll definitely never do such an epic Let’s Play ever again, at least not in text, but this probably isn’t the last time I’ll be doing one based in the Elder Scrolls series.