Halo: Combat Evolved rounds out a trio of FPS games, along with GoldenEye and Perfect Dark on the Nintendo 64, that my brother and I did some serious bonding over in my late teens/young adult years while he was living back with my family – we’d watch each other’s playthroughs, hop into cooperative missions together from time to time, and of course, play tons of “Slayer” deathmatch against one another. Unusually, my dad, not much of a gamer, was also strangely drawn to Halo, often filling a third slot in our split screen multiplayer sessions. My dad really got into it and probably spent far more time with the single player campaigns of the first Halo games than either of us did. In fact, through sheer force of will (I imagine assisted by unabashed abuse of the checkpoint system) I think he even eventually beat them both on “Legendary” difficulty. 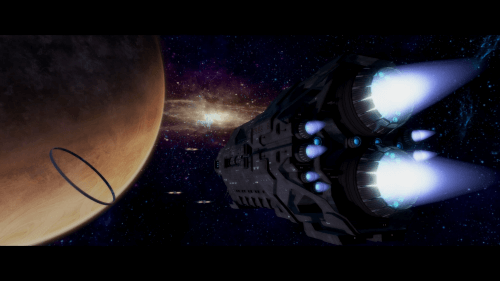 Beyond what it meant to me personally, Halo: CE was a special game. I still vividly recall my brother bringing home a brand new Xbox that he’d unwisely blown a chunk of a paycheck on, hyping us up on how awesome Halo was. At first I wasn’t all that impressed with what it was doing, since games like Half Life and Unreal had already started evolving the FPS genre in similar ways on PC, but I was quickly won over with its unique aesthetic, mysterious science fiction storyline, slick, polished execution, and almost perfect early implementation of dual analog stick FPS controls. I found the less linear, more open world sections (complete with crazy vehicles and more advanced AI than I’d seen up to that point) particularly compelling. As much as I had enjoyed some of the previous console FPS games, it was Halo that finally really sold the concept. To me, and to millions of others, it seems.

My enjoyment of Halo wasn’t isolated to consoles though – I preordered Gearbox’s PC port of Halo: CE mostly for the promise of at last being able to play multiplayer online, but I ended up being quite underwhelmed by it. The netcode in particular wasn’t quite as well suited for those of us pitiful enough to still be rocking dial-up Internet in 2002 as a lot of the other games I’d been playing on PC were. In more recent years that PC port of Halo: CE became the multiplayer game of choice for me and a couple of my co-workers during our breaks, and we still occasionally get together for online multiplayer sessions using the Xbox One’s Halo: The Master Chief Collection to dust our old favorite maps to this very day. While multiplayer really isn’t in the scope of Halo Fest 2020, I can’t go without at least mentioning it since it’s such a huge part of Halo: CE (and the rest of the franchise’s) success, and there’s definitely still a ton of fun to be had there. 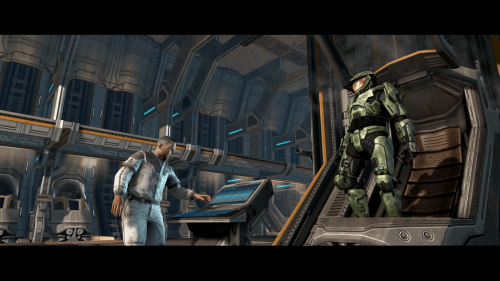 On to this playthrough of Halo: Combat Evolved! I should note that I’m playing through the version of the Halo: Combat Evolved Anniversary included with the aforementioned Xbox One MCC. This was my first time playing the Anniversary edition remaster, and given that I’ve played through Halo: CE’s single player levels more times than I can recall, I’m going to spend much of my time here discussing that release more than the game overall.

The first thing that I noticed upon loading into the first level of Halo: CE Anniversary was the lack of the short tutorial section based around Master Chief waking up out of cryo-sleep. This immediately left a sour taste in my mouth. I mean, what the fuck? They removed the tutorial? What else did they remove? ARGH! Later I realized that this was because I started the campaign in “Heroic” difficutly, which skips the tutorial just as it’s always done – nothing to do with the new version. Oops. Okay, well, of course, my attention then snapped back to the presentation. 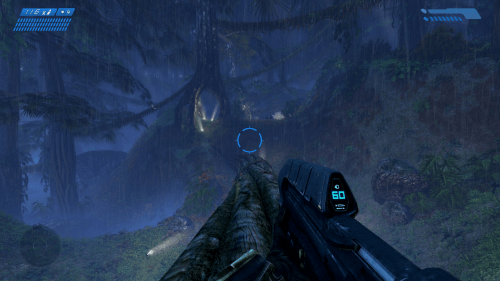 “While beautiful, 343 Guilty Spark feels quite different from the original.”

All of the graphics in the Anniversary edition have been lovingly and painstakingly remastered to make the game look a little bit more suitable to newer generations of consoles. The remaster also makes efforts to bring Halo: CE in-line stylistically with the latter games in the series, particularly Halo: Reach. For the most part, I think this was a rather successful effort. The new artwork is mostly great and overall the game looks how most people would likely remember it looking after not having played it for years. Still, the change in style also means it is often quite a departure from Halo: CE’s original graphics, which were of course Bungie’s first stab at what would eventually evolve into what we got in Reach. The dark purples of the covenant forces have been replaced by lighter hues, the architecture of the buildings on Installation 04 now have a lot more detail, but losing much of their cold, stark character as a result. The dense foggy swamp of “343 Guilty Spark” is now a much more lush, and much less creepy, jungle. The list goes on and on.

This might have all been less obvious if 343 didn’t include the fantastic addition of being able to instantly toggle between new and old graphics with the press of a button. I found myself doing this quite often to really take in the differences. Surprisingly, sometimes the original graphics “up-resed” still looked quite acceptable, even rivaling the new ones, and it took me a few seconds to realize I was accidentally still on the old graphics on more than one occasion. They would have been even better if they weren’t based on the aforementioned flawed PC port. That said, the outdoors sections of the game are where the remastered graphics clearly blow the old ones out of the water. The lighting on the indoor sections is quite a bit different too, and while some might protest a loss in tension, some sections are much easier to navigate as a result. “The Library” is the prime example; while still being a Flood infested, repetitive slog, you can probably remove getting turned around and lost multiple times from your list of its aggravations now. 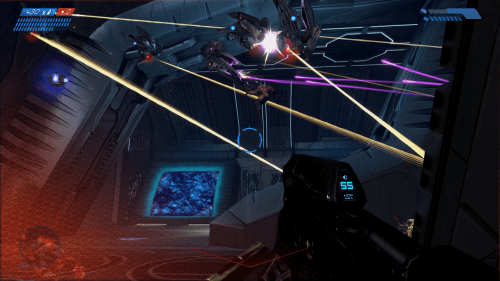 While discussing potentially unpopular changes, let’s talk sound. The music has been completely rerecorded for the Anniversary edition, and it’s mostly great. The biggest issue I have here is with mixing – there were definitely many points where the music was drowning out the in-game dialog, which is an issue I don’t remember having with the original game. They did eventually add the option to toggle between soundtracks to keep the purists happy, which is probably a good thing given how beloved the Halo: CE soundtrack is. The sound effects have also been completely redone. Again, they did a great job here, and most people probably won’t even notice, but some of the effects do indeed sound radically different which I’m sure irks quite a lot of the more hardcore Halo fan-base. While I believe they’ve included an option to use classic sound effects when starting a single player session in a recent patch, it’s still not instantly toggleable like the graphics are, unfortunately.

As I mentioned, I went through the campaign in “Heroic” difficulty, which is way more of a pain in the ass than I remembered it being. There were definitely a few sections where I had to bash my head against the scenario I found my last checkpoint throwing me into over and over until I managed to work out a strategy to survive, or at least had a rare bit of good luck with. Honestly, this didn’t feel much better than “save scumming” through the difficulty, and was seriously frustrating. Maybe this is just a case of me getting older and my l33t FPS skillz withering away though. Finally, as if Heroic didn’t make me hate myself enough, Anniversary added the “skull” system found in later Halo games, and while I did go out of my way to collect all of the skulls, I certainly didn’t activate any of them as part of my normal playthrough. Searching for them was a fun diversion, at least! 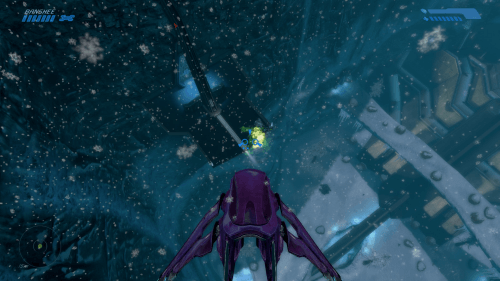 “As annoying as the later levels can be, they have their moments.”

Throwing back to a complaint I’ve always had about Halo: CE, I hate how goddamn repetitive and long some of the levels in its campaign are. I’m looking at you “Assault on the Control Room”! At least the checkpoints come frequently enough to subdivide the levels into more bite-sized chunks pretty well. The infamous fact that you then have to backtrack through a few of them in later levels on top of that still almost feels like a direct middle finger from the developers to the player though. These rehashed areas tend to play out just differently enough to just barely work. The saving grace here is that, despite all of this, the campaign overall is fairly short. Again, this just barely works for me, and thankfully Bungie never really repeated these mistakes again in later entries.

Halo: CE’s story has always been a little odd. The overall plot, which I’ll recap in my next entry, is easy enough to understand, sure, but there are so many vaugeries in its details and its backstory that only later get fleshed out as the series progresses, and even then, I’m guessing (having never read them) those are mostly only truly explained in the novels. The Anniversary edition adds a hidden terminal to each level that can be triggered for a short animated cutscene that goes a long way to help explain flesh out the origins of Installation 04, Guilty Spark 343, and the Flood. I have to imagine that some of these would be utterly bewildering to new players, but to a Halo veteran like me they’re pretty damn cool and very much appreciated. 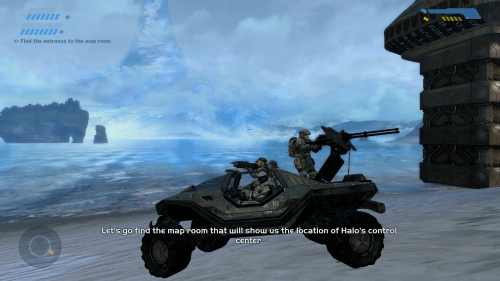 “I never get sick of The Silent Cartographer, especially in co-op!”

You know, Halo: CE still managed to be a fun ride despite its old age and more well-known shortcomings. The first time you load up a Warthog with marines and go tearing down the beaches in “The Silent Cartographer”, out maneuver a charging Hunter to land that final shotgun blast to the small of its back, or perfectly stick a plasma grenade to a rampaging Banshee as it dives down from high above you, you’ll forget all about this game being almost 20 years old. To me, it remains a reasonably timeless game, and the Anniversary enhancements should only help it to feel that way a little longer.

Now onto a game whose campaign I’ve somehow only completed once, Halo 2!

Screenshots taken from the Steam community for the PC version of Halo: The Master Chief Collection.