After beating Warhammer: Battle March I jumped right into my Xbox 360 backlog.

I decided to hit up something entirely different first and started Beautiful Katamari. I’m certainly familiar with the concept behind the Katamari games and indeed have tried them in very short bursts in the past but this is the first time I’ve actually tried to sit down and play through one. I don’t feel like I need to say much about the quirky characters, stylized art, bizarre, catchy music, or how it is all hilariously countered by the disturbing concept of “rolling up” living people, destroying cities, and even uprooting entire continents. The controls take a little getting used to which I’m sure is quite intentional but, even so, I found myself sucking at Beautiful Katamari lot more than I’d anticipated. I had to retry some stages several times before beating the required goals which doesn’t even guarantee you got a good score a long the way. The king is also a pretty big dick when you do any less than fantastic. Thanks Dad!

I blasted through the entire single player campaign in just a few sittings picking up an easy 245 achievement points along the way. Definitely a unique, enjoyable game but definitely not something I felt like I wanted to invest a lot of time into especially considering the size of my backlog though I admit I was definitely tempted to try to beat some of my more lackluster scores. If you are the type who wants to complete games 100% though Beautiful Katamari gives you plenty of goals to chase after – collecting hidden cousins and presents in levels and completing your collection of rolled up items as well as other achievements will have you playing for quite a few more hours. There’s also several additional DLC levels you can purchase as well which I’ve heard are pretty good. 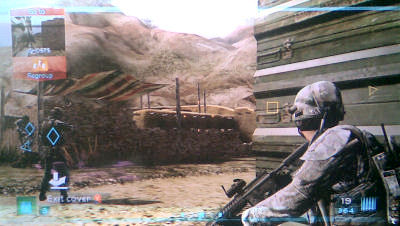 “Sure, don’t worry about why I’m in cover guys, just stand there in the open.”

Next up was Ghost Recon: Advanced Warfighter 2. I’ve been a long time fan of the Ghost Recon series although the original Ghost Recon is quite clearly my favorite with all subsequent games taking different directions to try to break out of its hardcore niche into a more mainstream audience. I’m only about a third of the way through the single player campaign at the time of this post but so far GRAW2 definitely corrects some of the issues I had with the first GRAW: The campaign feels much shorter, with less drug out and strung along missions. The game as a whole feels a lot easier and, more importantly, less frustrating than the first one. Overall I’m having a lot more fun with GRAW2 than I did with GRAW as well – I’m not sure if this is because of some of the changes and the extra polish that it’s received or maybe just because it has been a while since I’ve played this kind of game. Regardless so far I’m considering replaying the whole thing on the hardest difficulty when this run is done with which is in stark contrast to GRAW’s single player campaign that I couldn’t wait to be done with by the time it was nearing the end.

My Warhammer Online burnout morphed into a general MMO burnout after taking a very quick hop around space on my Eve Online account thanks to a free reactivation promotion. I was quickly reminded of why I quit the game and, more importantly, if I wanted to get the most out of hopping back into it I’d have to invest way more time than I currently have running around with a corporation (Eve’s equivalent of a guild or a clan) and the like. Besides that I’d simply rather be playing other games than any particular MMO right now. There are certainly some interesting looking ones on the horizon, such as Jumpgate: Evolution though. It may take one of them to get me back in the fold after I finally decide to cancel my WAR account.

Please forgive the horrible photograph of GRAW2. This is the first time I’ve actually posted a photo of a 360 game despite being tempted many times before. It’s better than nothing, perhaps? I definitely prefer posting my own screenshots over stealing someone else’s in any case.