This seems like my first game log in quite a while – in fact it is. I’ve simply not been playing a lot lately, disappointingly, and the one game I’ve been playing the most I’ve been putting a lot of effort into “100 percenting” so it is taking what seems like a huge amount of time to complete. I’ll report back on that when I’m through with it but check this out in the meantime!

A little while ago a friend introduced me to this small, still in development indy game called Minecraft and I’ve quickly become addicted to it. It’s basically a game in which you can freely build things in an open world – from tunneling underground, to building massive structures. The main game-type has you doing so while building up resources, crafting, and dodging and/or fighting the occasional creature. 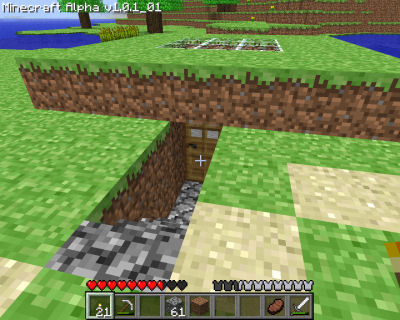 It’s hard to pinpoint exactly what it is about this game that is so charming: Is it the Doom meets Mario style of simple, low-res graphics? Is it the Lego like ability to build anything in a world which is essentially a big toy box? For me, I think the sense of immersion I get from exploring these strange, randomly generated, infinite worlds is the most appealing part. I’ve always considered myself to be at least a little bit of an “explorer” but Minecraft has really managed to reveal just how extreme that side of my gaming psychology can be.

I could spend a lot more time attempting to describe Minecraft and its many glories but as luck had it early into writing this post I read this fantastic article on Bitmob describing the game. Check it out for some thoughts on and a quick introduction to the game.

Anyway, here’s the meat and potatoes! A short chronicle of a few days (of mostly ~1 hour play sessions) in a newly generated world:

I started by building a house on an ocean front beach near to where I started. There were mountains close by with several caves in them as well as quite a few trees scattered about and of course an abundance of water for farming later on. My current preferred way to start out with a house in Minecraft is simply to dig a pit, whatever size I feel like, 2 blocks deep, and then use the dirt I gathered from the dig to build a 1 block high dirt wall and ceiling. This is advantageous because it can be done quickly before nightfall on your first day without any tools. You can then block up the door, or half block it if you prefer, to keep safe for the night. 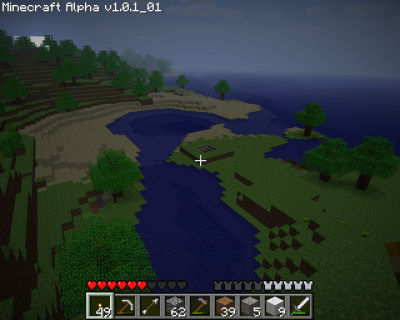 “A view of my home from above as night sets in.”

I started the usual way – chopping down trees by hand to get some wood to construct a workbench with. Next I made some wooden tools, specifically pick axes, and set out to survey the hills. There were a number of caves in the nearest, largest mountain, but absolutely none of them seemed to contain any ore. After upgrading my tools to stone I set out for some coal. A little more searching, this time in a small, craggy rock face across the valley from the aforementioned mountain, yielded a pretty massive vein of coal. Now I could really get down to business! I started by making a mass of torches as well as some additional stone tools and a furnace.

I spent a night digging a stairwell in my house’s floor down to a long, straight hall which I lit with torches as needed. I came across some coal here and there but nothing spectacular. As day broke I went back outside and began gathering additional wood and cloth while searching local caves for signs of iron. Unfortunately iron and coal were rare finds and as night set in I took refuge in my home once more. I ended up crafting myself some glass to turn the top of my lowly, dirt house into a classy skylight. I tunneled a bit more below my house turning my long corridor to the right. I came up with vague plan to make a series of tunnels, forming a grid, and then cleaning out the entire space between them, harvesting any resources I might find along the way and making a massive room to serve as a foundation for further mining efforts. Just as I decided to start doing just that, turning another right corner with my original tunnel, I hit a natural cave. 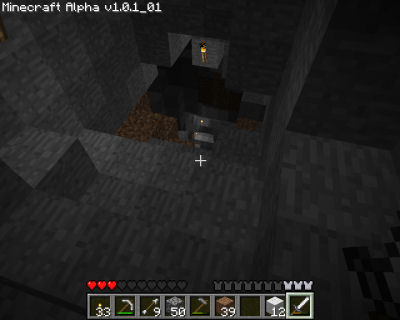 “A massive natural tunnel leading deep into my mine.”

I had broken into the cave towards the top of it and carefully made my way to the bottom. The large main room broke off in several directions. I set an array of torches as I began to explore what turned out to be quite a massive cave system which included 2 underground rivers and what seemed to be a large amount of iron and coal. I was quite excited to start excavating and fully investigating this cave system but I needed to quit for the day. As I didn’t quite explore every last inch of the cave, meaning there were possible unknown, unlit tunnels where creatures could be hiding, I built a door onto the tunnel leading down to the cave. I also finally built myself a real front door to my house while I was at it.

I was pretty anxious to get to mining and immediately returned to my newly discovered basement cave system. I started by mining all of the ore out of one of the smaller tunnels close to the entrance and then signaling that I was done with it by building some dirt pillars around the entrance of it. I may do something a bit more interesting with closed off areas later on. I then went another direction and began exploring pathway up towards the ceiling that I had missed last time. Unfortunately it didn’t have anything of note in it and it ended up in a small, square room a lot higher up than the rest of the cave. I thought to myself “hmm, I wonder how close I am to the outside?” and mined a single rock from overhead. I saw some water above me and thought “cool, I’m under a river!” Barely enough time for that thought to have processed passed before the cave started flooding. I ran for my life. This being my first encounter with underground water accidents I thought my mine was done for but luckily the water produced a nice, clean waterfall and didn’t flood too much of the surrounding area. 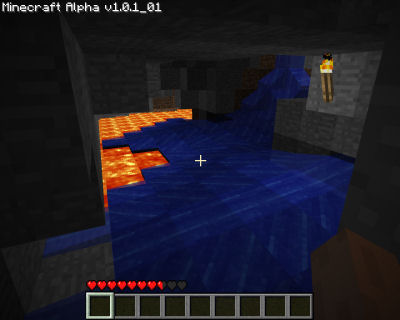 “An underground river spilling into a lava flow.”

I continued to explore the cave system, constantly finding new areas further and further in. This thing was even more gigantic than I originally suspected, eventually leading down into some huge natural caverns. The first time I ran into a bow carrying monster I must have jumped 10 feet out of my chair in what was probably the most scary moment I’ve had in a video game since playing Doom 3. That *thwack!* sound just totally caught me by surprise. Exploring Minecraft doesn’t really put me in that sort of a tense mood like Doom 3, Dead Space, and other similar games do though – I’m usually much more curious about exploring then I am nervous about what will happen to me around the next corner which I suppose is why this surprise attack freaked me out so much. I ended up crafting a set of iron armor and an iron sword for such encounters in the future. 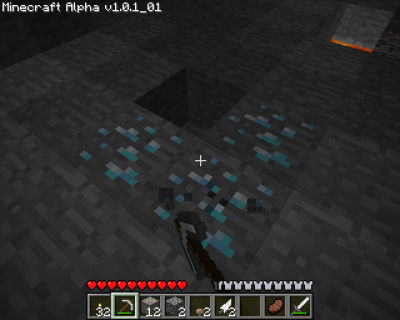 “Score! I found a second diamond vein while taking screenshots!”

Eventually I reached the bottom of the caves – a complex system of smaller caves teaming with iron and coal interconnected by giant underground rivers of lava. The lava let off a warm glow which was quite enjoyable after fumbling around in the dark for so long. This is also where I discovered my first diamond vein which yielded 3 of the precious stones. As I explored more of the depths of the cave system it became completely obvious that I wasn’t even close to having explored the entire thing yet so I came to a good stopping point and returned to my humble home to call it a night.

More exploration! I spent almost the entire session yet again exploring my newly discovered mines, though this time a bit more methodically than before. I was able to seal off a couple of sections, having mined out their coal and iron, with the dirt pillars I used yesterday though I also, for better or for worse, discovered some exceedingly large and often deep new sections. I marked the entrances to those sections with a series of new torches to point me in the right direction. Even after I explore all of the conventional cave, which may yet take quite a while at this rate, the entire bottom floor of the deepest section of the system seems to be riddled with a sprawling maze of lava filled tunnels, some of which I suspect lead to yet more caves and tunnels. 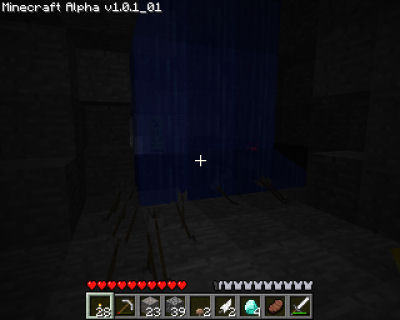 “It may be hard to see in the thumbnail but there are two skeletons, a creeper, and a spider on the other side of this waterfall.”

After I do finally explore it all and mine out all of the precious ore I’m toying with the idea of going through with my blocks and my pick and basically remodeling the entire cave system so that it looks man made – fixing craggy edges, rough floors, and strange turns. It might be too much work though, given the size of this thing, especially considering how massive some of the caverns are. After that I plan to look for a new place to build a better, much more complex house and new places to mine.