My Duke 3D retrospective was pretty epic. Sure, it’s not too much longer than my earlier ones but I put a lot of time into it. Tons of research and tons of gaming. Not only did I play through the entire 4 episodes of the Atomic Edition multiple times on several different platforms but I also played through the entirety of Duke Nukem: Manhattan Project and Duke Nukem Forever. While I’m not going to write full reviews of them I figured I’d give a little more of my impressions of both games while they’re still fresh on my mind.

Duke Nukem: Manhattan Project was released on PC back in 2002 while Duke fans were still very much waiting around wondering where the fuck Duke Nukem Forever was. While there had been a few other Duke Nukem related games on other platforms Manhattan Project was the first time Duke’s original fanbase on PC were catered to outside of expansions for Duke Nukem 3D itself. I remember reading reviews of it in various gaming magazines and on a few of the sites I read at the time as being fairly positive, particularly considering it was released as a budget title. Researching Duke’s many offspring for my Duke 3D article I figured I might finally give Manhattan Project a try and learning that it was available on Xbox Live Arcade sealed the deal. 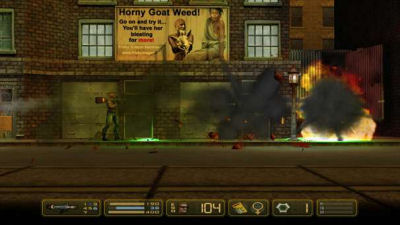 Manhattan Project is a side-scrolling platformer that, in the most basic sense, plays a lot like the original pre-Duke 3D Duke Nukem games. Platforming, shooting enemies, collecting keycards, backtracking, etc. Combine this gameplay with the updated oneliner-spouting, babe loving Duke and lots more obvious influence from the weapons, enemies, and environments of Duke 3D, and that is pretty much Manhattan Project in a nutshell. It’s a relatively simple game all in all – there’s only ever one babe to rescue and one keycard to track down on any one level though it still does a decent job of trying to make the levels not feel too linear. The weapons are decently varied and feel pretty satisfying to use and the mountains of quippy dialog from Jon St. John keep things lively. The humor is still pretty close to that of Duke 3D though there is a slight negative shift in the tone of some of the jokes and the way women are treated – that is the jokes are sometimes a bit sillier and the women are definitely more sexualized and objectified. 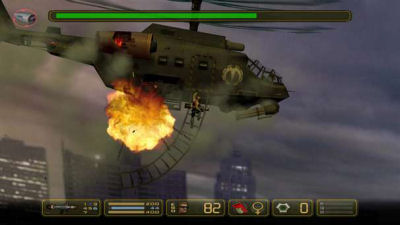 One of the more interesting things about the game is that it was one of the first “2.5D platformers” I’d ever heard of. That is, a 2D platformer done entirely in a polygon based engine that leverages its 3D capabilities to do interesting things with planes, camera movement, etc. It’s a little rough around the edges in that respect but mostly only because the developers seemed to be having a little bit too much fun with some of those aspects as some of them, particularly changing perspectives and changing planes, quickly wear out their welcome and start feeling gimmicky. One thing that particularly annoyed me was that you could only shift planes at designated locations but I’d occasionally bump into other spots where it looked like I should have been able to and no, I’d have to backtrack to just the right spot. The camera can also occasionally do some silly things too but all and all it’s perfectly serviceable. 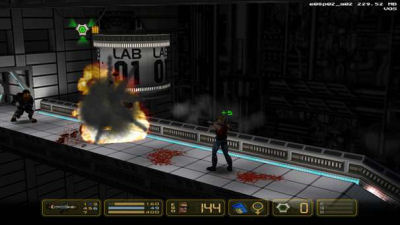 The platforming itself sometimes bothered the shit out of me as the collision hit boxes seem totally off or at least massively oversized which meant sections that involved avoiding insta-death obstacles (spikes for instance) could be highly frustrating. Thankfully such sections were pretty rare so other than a couple of instances of repeating the same section 20 times it wasn’t a deal breaker for me. The story was, as you might expect, practically nonexistent, mostly only setting the scenes from stage to stage, giving Duke a good excuse to shoot some pigs in the face and rescues some babes. The XBLA port is well done but it is definitely a “port” more than anything with no real updates to the rather outdated visuals or anything else not directly related to making the title work right on an Xbox 360.

Overall, I’d recommend the game if you’re a big Duke fan and it sounds at all appealing to you, otherwise I’d give it a pass. Part 2, wherein I get into the much more interesting Duke Nukem Forever, coming soon!

As usual my Xbox 360 screenshots were stolen from elsewhere. I had to cherry-pick these few out of the PR releases as few of them did a great job of representing how the game ACTUALLY looks.